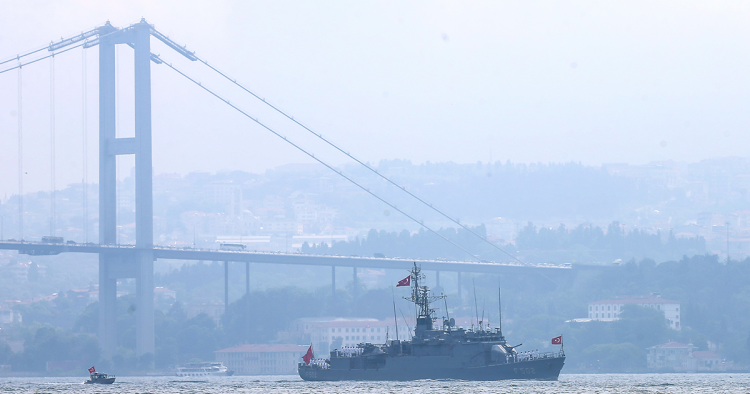 When it comes to Turkey-NATO ties, Ankara is regarded as more of a problem than an ally these days. Not only did it purchase a Russian S-400 air defense system, but its gunboat diplomacy in the eastern Mediterranean also raised the specter of military conflict between NATO allies when Greek and Turkish naval flotillas steamed directly toward each other this past summer. There is one region, however, where Turkey can help NATO efforts: the Black Sea.

Since its annexation in 2014, the Crimean Peninsula has become a Russian military fortress. Moscow has significantly increased its military presence in a region that Russian President Vladimir Putin considers the centerpiece of Russia’s power projection into the Mediterranean. It has now enough assets, reinforced with new ships and submarines with powerful Kalibr missile systems, to overwhelm any coalition in these waters. But Moscow wants more. In 2021, the Russian army will receive almost 3,500 pieces of new equipment, and two-thirds of the military budget will go toward purchases of armaments and upgrades. This includes the Ministry of Defense’s latest Strategiya automatic surface surveillance system in the Black Sea.

A growing American presence and a new Turkish strategy

In response, the U.S. Navy has stepped up its own military presence in the Black Sea. In the last two weeks, the USS Donald Cook and the USS Porter, guided missile destroyers, and the USNS Laramie, a refueling ship, entered the Black Sea in what has been the largest deployment in the region since 2017. Both destroyers are armed with Raytheon Tomahawk cruise missiles, bringing real firepower to the Black Sea theater. The U.S. Navy’s appearance is an unmistakable show of force, demonstrating that it can operate in a wide geography and without help from regional allies, if necessary.

America’s presence in the Black Sea is important to check Russian expansionism, but a more effective strategy calls for a coordinated response from regional allies such as Turkey. Turkey’s relationship with NATO and the U.S. in particular has been rocky of late. Ignoring warnings from NATO and the threat of sanctions from the U..S, Turkey went ahead with its purchase of the Russian S-400 air defense system, taking delivery of the first shipment in mid-2019. But despite its growing defense partnership with Moscow, Ankara is equally uneasy about the growing Russian military presence in a region where Turkey once had the edge. In a 2016 plea to Turkey’s NATO allies, Turkish President Recep Tayyip Erdoğan said the Black Sea had become a “Russian lake” and called for a greater NATO presence, reversing a decades-old Turkish policy of keeping the alliance out.

Turkey has developed a multi-pronged strategy to counter Russian influence in the Black Sea. One important leg of that strategy is on the home front, where Turkey is strengthening its navy. A project called MILGEM, a contraction of the Turkish for “national ship” (milli gemi), was launched to design and construct naval vessels in-country, including ADA class corvettes. In 2018, the Pakistani Navy signed a contract to acquire four of these ships from Turkey’s state-run defense contractor ASFAT, the first successful export of these vessels. Turkey has also been building up its anti-access/area denial (A2/AD) capabilities to counter Russia’s growing A2/AD assets in the Black Sea by ordering four new frigates, called both Istanbul and MILGEM II. The frigates are based on the ADA class corvette design but extended by 14 meters to enable the inclusion of a vertical launching system for surface to air missiles. The naval version of the army’s Korkut low-altitude air defense system, Gökdeniz, will be added to the inventory for the first time with the frigate. The national Atmaca anti-ship missile will also be integrated into the first unit of the class, TCG Istanbul, which is forecast for entry into service later this year.

Turkey is taking steps on the foreign policy front as well, stepping up its cooperation with Ukraine, Georgia, and Azerbaijan. Ankara views these countries as instrumental in its efforts to balance the Russian military presence in the Black Sea and South Caucasus. Since Russia’s annexation of Crimea, Turkish-Ukrainian relations have expanded significantly. Last year, Erdoğan unveiled a $36 million military aid package for Ukraine. The two countries agreed to cooperate on the design and manufacture of aircraft engines, radar units, drones, and navigation systems and consider collaboration on advanced technology projects, such as ballistic missile systems. Turkey also plans to sell its ships to Ukraine as part of a much bigger defense deal, which, if it comes to fruition, could change the balance of power in the Black Sea. Besides cooperation in defense industries, the Ukrainian and Turkish navies also conduct joint training in the Black Sea to showcase their ability to operate "in accordance with NATO standards."

Turkey has also invested in shoring up the defenses of Georgia, another Black Sea country threatened by Russia’s growing influence in the region. Turkey has allocated millions of dollars to the Georgian Ministry of Defense to reform the country’s military logistics and transfer defense capabilities to its northeastern neighbor while advocating for the extension of NATO membership to Georgia, a move Russia opposes.

Turkey’s defense cooperation with Azerbaijan has been growing as well, which was on full display in the fighting in the disputed territory of Nagorno-Karabakh late last year, when Ankara threw its full military support behind Baku. Turkish drones provided Azerbaijan a huge advantage in the conflict, which ended with Azerbaijan capturing significant swathes of territory from Armenian forces. Turkey’s military exports to Azerbaijan rose six-fold in 2020, with Azerbaijan jumping to the top of the list of Turkish arms buyers in September.

NATO and the Black Sea

NATO should support these Turkish efforts. It should also establish a permanent “Black Sea Maritime Patrol” group modeled on the successful Operation Sea Guardian in the Mediterranean. Operation Sea Guardian is a flexible effort that can potentially cover the full range of NATO’s maritime security needs. In accordance with NATO’s “framework nation” concept, Turkey can be assigned the leading nation role in the Black Sea and smaller members can integrate their own, more limited capabilities into an organizational structure provided by Ankara.

Mirroring other NATO missions in the Baltic or Mediterranean, Turkey can play a coordinating role to bring in other NATO allies willing to participate and provide support. Such a force would require NATO’s coordination and political pressure among non-Black Sea members to commit in advance to a regular and rotational maritime presence in the Black Sea, in line with the 1936 Montreux Convention, which limits the presence of warships from non-littoral states to a maximum of 21 days. Although the development of such a multinational unit would require a sustained diplomatic effort, once active, it would boost NATO’s deterrence in a strategic region that has become a springboard for Russia to project power from Georgia all the way to Syria and Libya.

Gönül Tol is the founding director of the Middle East Institute’s Turkey program and a senior fellow for the Frontier Europe Initiative. Yörük Işık is a geopolitical analyst based in Istanbul, where he runs the Bosphorus Observer, analyzing military movements on the Turkish Straits. The views expressed in this piece are their own.