Is the Turkey-Qatar alliance really under threat? 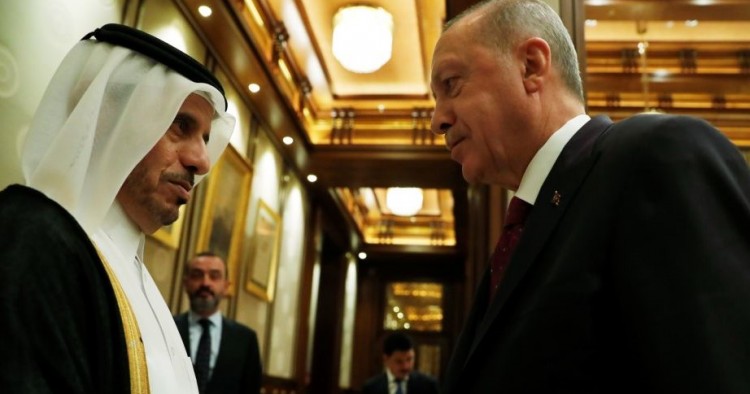 On Nov. 4 Daily Sabah, a strongly pro-government English-language daily in Turkey, published a scathing editorial with a title that says it all: “Al Jazeera English: A threat against the Turkey-Qatar alliance.” According to the editorial, Al Jazeera English slandered Turkey over its recent military incursion into northern Syria, known as Operation Peace Spring, and thus jeopardized the future of the Turkey-Qatar alliance. To save it, the editorial asked the network “to weed out all individuals seeking to poison that alliance behind the smokescreen of independent journalism.” If no action is taken, the editorial threatened, Turkey would have “no reason to have Doha’s back.”

Given the close relationship between the Turkish government and Daily Sabah — and indeed the broader media environment in Turkey — it is highly unlikely that such a fiery editorial, which directly threatens Qatar, the only Arab state in the Middle East that remains Turkey’s ally, would have been published without a green light from “the palace,” as the Turkish president’s office is known. Nevertheless, it is still too early to argue that the Turkey-Qatar alliance is facing an existential threat. The problem is not an insurmountable one, and Qatar has strong reasons not to undermine its relations with Turkey: The country is already heavily invested in the Turkish economy and needs Turkey to balance its larger neighbors, Saudi Arabia and the United Arab Emirates (UAE).

When the Arab Spring erupted at the end of 2010, few would have imagined how strong the Turkey-Qatar alliance would grow in the following years. In a sign of the alliance’s strength, when the Qatar diplomatic crisis broke out in June 2017, pitting the emirate against the Arab Quartet (Saudi Arabia, the UAE, Egypt, and Bahrain), Turkey took a strong pro-Qatar stance. It sent tons of food supplies and deployed troops to Qatar, thus dashing whatever hopes it had of restoring its already strained relations with Saudi Arabia and the UAE. Qatar has certainly returned the favor, investing heavily in Turkey’s economy, including the strategic defense industry, and rushing to its aid during the severe currency crisis in the summer of 2018.

So what went wrong? Turkey has long been critical of the U.S. partnership with the Syrian Kurdish group known as the People’s Protection Units (YPG) in the fight against ISIS. Ankara considers the YPG the Syrian branch of the Kurdistan Workers’ Party (PKK), with which it has been in conflict for decades, and thus a security threat. Turkey has grown increasingly concerned since late 2015 that the YPG has been receiving heavy weapons and training from the U.S. and gaining widespread legitimacy and popularity in Washington, European capitals, and even in Moscow. At the same time, Turkey’s concerns, which it has repeatedly voiced at the highest levels and in a variety of platforms, have gone largely unheeded.

As was widely covered by the media, Turkey received a green light from President Donald Trump on Oct. 6 and launched a long-planned military operation into northern Syria on Oct. 9. Turkey halted its operation nine days later, not because of the YPG’s military resistance, but because of the international outcry sparked by the incursion. Under pressure from the U.S. Congress, even President Trump, who gave the initial green light, threatened Turkey with devastating economic sanctions. He went on to impose some sanctions on Turkey, although they were not as harsh as the ones the U.S. Congress called for and moved to implement. In addition, a number of European countries and Canada stopped selling weapons to Turkey. Given its already fragile economy, Turkey simply could not ignore these threats, and thus bowed to international pressure and halted its operation after first reaching a deal with the U.S. and then Russia to declare a ceasefire.

During Operation Peace Spring, Qatar stood out as one of the very few countries that supported Turkey’s military incursion into northern Syria. Immediately after Turkey launched the operation, the emir declared Qatar’s support for it in a phone call with Turkish President Recep Tayyip Erdogan. Qatar’s foreign minister, Mohammed bin Abdulrahman al-Thani, also expressed his support, even declaring the YPG to be a branch of the PKK, “a classified terrorist group.” Qatar thus defied the Arab League, which condemned Turkey’s military operation and called it “an invasion of an Arab state’s land and an aggression on its sovereignty.”

Yet, Qatar’s public support was not enough for Turkey. This is because the Qatari leadership did not realize that Turkey was not only undertaking a military operation, but also facing a major international public relations crisis — quite possibly the worst in its history. Throughout the whole drama leading international media outlets strongly and passionately supported not Turkey, but the YPG. Trump’s decision to green light the Turkish military operation was widely portrayed as a betrayal of the Kurds and a move that would hasten the re-emergence of ISIS, while Turkey was accused of carrying out ethnic cleansing against the Kurds and mistreating Syrian refugees.

Given the strong bond Turkey has developed with Qatar, Ankara expected Doha to mobilize its media power to provide support, especially Al Jazeera English, which could convey Turkey’s legitimate concerns to the English-speaking international community.

But that did not happen. Instead, according to the Daily Sabah editorial, Al Jazeera English spread “anti-Turkey propaganda. Under the pretext of independent and objective journalism the network has succumbed to bias and fake news to misportray known terrorists and fugitives from law as oppressed activists.” The editorial went on to add that, “jumping on the Western media’s Turkey-bashing bandwagon, the network smeared last month’s Turkish operation into northeastern Syria with Operation Peace Spring with the PKK terrorist organization’s talking points.”

In fact, the Daily Sabah editorial seemed aware of this and did not directly accuse the Qatari leadership, but rather “a small group of people” within the network and demanded they be removed. Given Turkey’s strategic importance for Qatar, it would not be surprising if the Qatari leadership were to take some conciliatory measures to address Turkish concerns. The extent of these measures, however, is yet to be seen.

Birol Baskan is a non-resident scholar at the Middle East Institute and the author of Turkey and Qatar in the Tangled Geopolitics of the Middle East (Palgrave, 2016). The views he expresses are strictly his own.