Turkey: A Reluctant Partner in the Fight against the Islamic State 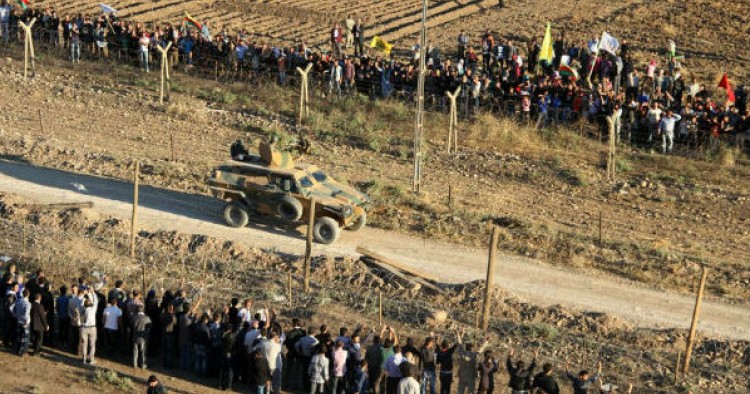 Last week, President Obama laid out his strategy to fight the Islamic State (also known as ISIS or ISIL). The strategy includes a systematic campaign of airstrikes; support to forces fighting ISIS on the ground, including Iraqi Security forces and the Peshmerga (the Kurdish armed forces); redoubling U.S. efforts to cut off ISIS funding; improving intelligence; strengthening defenses; and stemming the flow of foreign fighters into and out of the Middle East. Without addressing the specifics of the regional division of labor, the President repeatedly stressed that the most important component of his strategy was working with regional allies.

Turkey is one of ten members of the “core coalition” against ISIS announced at last week’s NATO Summit in Wales. Given its long border with Syria and Iraq and the threat ISIS poses to its domestic security, Turkey should be a natural candidate for cooperation against ISIS. The Turkish government has become increasingly concerned about the rise of ISIS after the group captured Mosul and held Turkish consulate staff hostage. Yet, Turkey is likely to be the most reluctant partner. Turkey attended Thursday’s talks in Saudi Arabia where Secretary Kerry sought to build support for Obama’s plan, but it did not join the Arab states in signing the final communiqué.

Several concerns underlie Turkey’s reluctance to play a frontline role.  In June, ISIS militants raided the Turkish consulate in the northern Iraq city of Mosul and captured 49 Turkish citizens, including the consul general, staff members, and their families. Since then, Turkey’s top priority has been the safe return of the hostages; it is concerned that joining a U.S.-led military campaign against ISIS might endanger the lives of Turkish hostages.

Turkey’s second concern is its ongoing peace process with the Kurdistan Workers' Party (PKK). In response to the growing ISIS threat, the PKK, the Peshmerga, and the People’s Protection Unit (the military arm of the PKK’s Syrian off-shoot Democratic Union Party) established a united Kurdish front. The PKK militants have come to the aid of Peshmerga fighters in the war against ISIS to halt the jihadi group’s advance into the autonomous region of northern Iraq. The People’s Protection Unit was the main force battling ISIS, and it helped thousands of Yazidis escape from the western part of the region as ISIS attacked.

The United States and some European countries have been directly arming the Peshmerga to facilitate its fight against ISIS. Reportedly some of the arms sent to Peshmerga ended up in the hands of the PKK. Ankara has become increasingly concerned about the PKK strengthening militarily at a time when Ankara is moving forward with a deal that would disarm the group.

Turkey is also concerned about the Shi‘a in Iraq getting stronger at the expense of Sunnis as a result of Western military support. Ankara considers the rise of ISIS as the direct outcome of discrimination by the Shi‘i government against the Sunnis.  If the United States keeps beefing up the Iraqi army, dominated by Shi‘a, Turkey thinks the Sunnis will get more alienated and marginalized, becoming more receptive to ISIS ideology. A shift in the balance of power toward the Shi‘a will also strengthen Iran’s hand in Iraq, an outcome Turkey wants to avoid.

Obama’s ISIS strategy creates additional complications for Ankara. Turkey has been at the forefront of the anti-Assad coalition since the early days of the uprising. It even turned a blind eye to weapons transfers to al-Qa‘ida (the most effective fighting force against the regime) and the groups linked to it, hoping to hasten Assad’s fall. But a U.S. attack against ISIS in Syria is likely to strengthen Assad’s hand and help him gain ground in opposition-controlled areas like Aleppo where the moderate Syrian opposition is stuck between ISIS in the north and regime forces in the south.

Public opinion in Turkey is another point of concern. According to a recently released German Marshall Fund Transatlantic Trends Survey results, 57 percent of Turkish society disapproves Obama’s foreign policy, up 4 percent from the previous year.[1] The conservative Sunni base of the ruling party is likely to oppose any Turkish role in a U.S.-led combat mission against a Sunni entity.

Hemmed in by these constraints, Turkey seems more likely to play a secondary, discreet role in the U.S.-led coalition against ISIS in Syria rather than a major role in a military campaign. Turkey recently stepped up intelligence sharing and tightened security cooperation with its Western allies. In collaboration with the European Union, it is now conducting tighter screening of passengers on inbound flights, and it recently beefed up border patrols on the frontier with Syria. But Turkey’s borders remain extremely porous and would be a focus of the diplomatic talks between Secretary Kerry and Turkish Foreign Minister Mevlut Cavusoglu in Turkey.

After having failed for two years to convince the U.S. administration to take a more forceful action in Syria, Turkey welcomes Obama’s decision to provide greater support to the moderate Syrian opposition. It has already been playing an important role in efforts to strengthen the Free Syrian Army. Turkey hosts a so-called operations, which is staffed by intelligence officials from the United States and other countries that have provided arms including light arms, ammunition, and anti-tank missiles to limited numbers of vetted rebels.[2] Turkey will probably intensify its cooperation with the U.S. on training and arms delivery. Turkey is unlikely to allow the Incirlik airbase or Turkish airspace to be used by the United States to stage attacks against ISIS, but it might open the air base for logistical and humanitarian operations.

With the rapid ISIS advance in Iraq and Syria, Turkish policymakers are caught between a rock and a hard place. Of all the NATO members of the “core coalition” against ISIS, Turkey is the most vulnerable to ISIS terror attacks. It not only shares a long border with Iraq and Syria, but it also hosts 1.2 million Syrian refugees, many of them living in major cities. The large refugee community makes it harder for authorities to monitor jihadis and easier for ISIS militants to move about the country freely.

The foreign fighters from the United States and Europe who are traveling to Syria to join the ranks of ISIS use Turkey as both a transit country and a recruitment ground. Reportedly, there are now well-established networks of radical Islamist factions including al-Qa‘ida-linked groups within Turkey. They have already staged several attacks against Shi‘i mosques in Istanbul.

Left unchecked, ISIS is likely to pose a greater threat to Turkey’s national security, but Turkey seems increasingly reluctant to play a major role in the fight against ISIS. To overcome Turkey’s reluctance, Washington must take concrete measures to address Turkey’s concerns. The first step might be to work with Turkey to secure the safe return of Turkish hostages held by ISIS; a second might be to ensure that the arms delivered to Peshmerga and Iraqi security do not end up in the hands of the PKK.