As Turkey-Russia ties warm, will Georgia be left out in the cold? 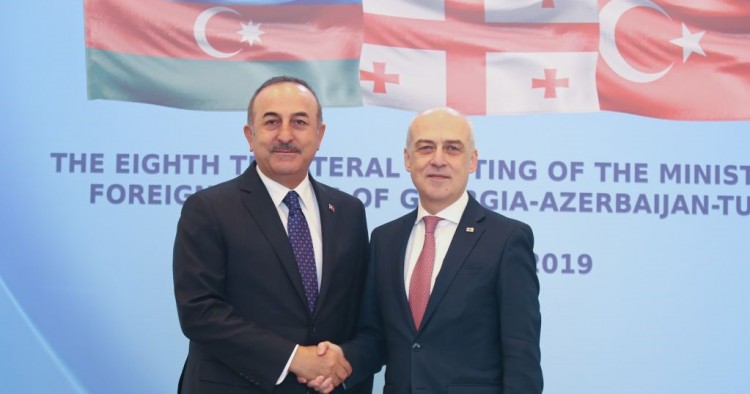 Turkey’s blossoming relationship with Russia has not only raised eyebrows in Washington and Western European capitals, it has also caused a great deal of discomfort in countries like Georgia that have borne the brunt of Russian aggression. A few recent scattered signals from Ankara, however, might comfort Turkey’s northeastern neighbor.

Counterbalancing Russia’s regional influence has been a key component of Georgia’s foreign policy. Closer ties to NATO member and EU candidate Turkey have occupied an important place in Tbilisi’s bid to deepen its integration with the Euro-Atlantic. Georgia has played a similar role in Ankara’s foreign policy vision. To counter Russian influence in the Caucasus, Turkey has long sought to strengthen the sovereignty of states in the region and promoted closer ties between the South Caucasus countries and Euro-Atlantic organizations. Over the past decade, economic and political relations between the two countries have developed considerably. Turkey is Georgia’s number one trading partner and a significant source of foreign investment while Georgia is Turkey’s partner in significant infrastructural and energy projects such as the Baku-Tbilisi-Ceyhan oil pipeline, Baku-Tbilisi-Erzurum gas pipeline, and Baku-Tbilisi-Kars railway. All three connect Azerbaijan and Europe through Turkey and help to diversify options for energy and transportation away from reliance on Russia.

From a Georgian perspective, a Turkey that has strong ties to the West and shares Georgia’s concerns vis-à-vis Russia is an ideal partner. Yet, things have been moving in the opposite direction in the last few years. Turkey’s relations with the U.S. and the EU have suffered from several crises. Over the course of the past 12 months, Turkey has launched a military incursion into northeastern Syria against Kurdish forces allied with the West, prompting sanctions from the U.S. and condemnation from the EU. Turkey-EU relations were strained further after Turkish President Recep Tayyip Erdogan threatened to send millions of Syrian refugees to Europe if the EU did not back Turkey’s plan to resettle them in a safe zone inside Syria. The EU adopted a sanctions regime over Turkey’s gas drilling in Cypriot waters, which the EU considers illegal. Turkey’s shipment of arms to Libya in violation of the UN embargo and the Turkish Parliament’s approval of deploying troops there have put further strain on Ankara’s relations with the West.

All the while Turkey has cultivated closer energy and defense ties with Russia. Turkey’s purchase of the Russian S-400 missile defense system despite threats of sanctions from the U.S., its cooperation with Moscow in Syria and Libya, and President Vladimir Putin and Erdogan’s recent launch of the TurkStream pipeline — designed to carry Russian natural gas to Turkey and southern Europe — came against a troubling backdrop for Tbilisi. Georgia watched anxiously as Turkey tilted toward Moscow after Russia and Georgia engaged in a bitter conflict over the latter’s separatist region in 2008. To accommodate Moscow, Turkey barred two American hospital vessels from delivering humanitarian aid to Georgia, revoking the 1936 Montreux Convention, which gives Turkey control over the Turkish Straits and regulates the transit of naval warships. Ankara assured Moscow that the smaller ships the United States dispatched would leave the Black Sea before the 21-day period mandated by the treaty expired.

But a few recent developments should come as welcome news to Georgia. Turkey-Russia tension over northwestern Syria’s Idlib region is growing and Turkey has become more vocal in its criticism of Russia. A few days after Turkey and Russia announced a cease-fire agreement in Idlib to stem the flow of civilians uprooted by the violence, Turkish Foreign Minister Mevlut Cavusoglu criticized Russia for not abiding by the terms of the deal and Turkey recently vowed to step up its support for rebel groups in the area. A more dramatic escalation of tensions happened over the weekend, however. Eight Turkish soldiers were killed in Idlib after they came under heavy fire from Syrian government forces on Sunday. The deaths are Turkey’s first fatalities as a result of direct confrontation with the regime since the civil war started in 2011. Erdogan said as many 35 Syrian government soldiers were killed in a retaliatory strike and up to 40 Syrian targets were being considered as part of the operation. The Turkish president has warned Russia not to “stand in the way.” President Erdogan has also been critical of the presence of Russian mercenaries in Libya, where the two countries back opposing fronts.

In a more interesting twist, Erdogan recently revived plans to dig a canal on the edge of Istanbul and hinted at the possibly of undercutting the 1936 Montreux Convention governing the Turkish Straits. In a TV interview he said military ships could use the canal instead of the Bosphorus Strait. The 20th-century Montreux agreement limits and regulates deployments in the Black Sea for navies not belonging to Black Sea littoral states, including NATO members. The convention has been an issue for the U.S., particularly at times of heightened tension with Russia. Erdogan’s statements were seen as a nod to increased U.S. presence in the Black Sea and thus a swipe at Russia, both of which are welcome news to Georgia. The canal is unlikely to undercut Montreux but the fact that Erdogan raised the issue at a time of heightened Turkey-Russia tension over Idlib is noteworthy.

Turkish Foreign Minister Cavusoglu’s statements in Davos are the latest good news for Georgia.  He called for the enlargement of NATO and the addition of Georgia to the organization. “I don’t understand why we have not invited Georgia or we haven’t activated the action plan for Georgia to become a member,” Cavusoglu said during a panel discussion at the annual meeting of the World Economic Forum. “We are criticized for having relatively better relations with Russia as a neighbor, but our Western friends are not agreeing to invite Georgia because they don’t want to provoke Russia.”

While Turkey dials up its criticism of Moscow, Erdogan, who is desperate to attract European investment in the country’s troubled economy, has welcomed German Chancellor Angela Merkel. He hopes to enlist Merkel’s help not just in attracting European investment but also to make sure Turkey-EU relations do not deteriorate any further. Despite the long list of problems in Turkey-U.S. relations, the worst that many expected in the form of U.S. sanctions has not materialized yet. And Ankara is threading cautiously to make sure it stays that way.

Turkey-Western ties may remain strained and the Turkey-Russia partnership might look strong from the outside, but Ankara seems willing to balance those ties. And that is a small but good sign for Georgia.