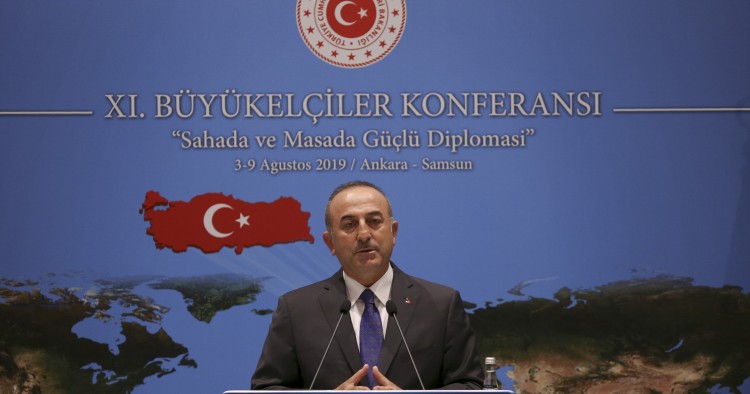 On August 5, 2019 Turkey’s Foreign Ministry launched the Asia Anew initiative,[1] whose declared aim is to give greater weight to cooperation with Asian countries. The initiative consists of four main pillars: 1) improvement of interstate relations, 2) expansion of the trade capacity of the private sector, 3) strengthening of academic cooperation and 4) development of interaction between the societies.[2] To date, though few details have emerged regarding how Ankara intends to implement this initiative, there is nonetheless sufficient reason to question whether it is viable or sustainable.

Turkey’s “Opening” to Distant Neighborhoods in the 2000s

The new opening to Asia was preceded by a period of nearly two decades during which Turkey’s participation in regional and international organizations, as well as its diplomatic representation have markedly increased. With a total of 242 diplomatic and consular missions, Turkey has spawned the fifth largest global diplomatic network.[3] Turkey is an active member of the United Nations (UN) and many other multilateral institutions.[4]

Since the early 2000s, Turkey has sought to expand its presence and influence across the Global South, ranging from Sub-Saharan Africa and Latin America to East Asia.[5] The “southern dimension” of Turkish foreign policy has included the opening of numerous new embassies and overseas offices of state-endorsed institutions.[6]

The expansion of Turkey’s global footprint is plainly evident in its engagement in Asia. Since 2010, Turkey has opened new embassies in Myanmar, Sri Lanka, Brunei, Cambodia, and Laos.[7] In 2013, Turkey became a Dialogue Partner of the Shanghai Cooperation Organization (SCO)[8] and that same year established (with South Korea, Indonesia, Australia, and Mexico) MIKTA, an informal partnership to support global governance.[9] In August 2017 in Manila, on the occasion of the 50th Asian Ministerial Meeting, Turkey became an ASEAN Sectoral Dialogue Partner.[10]

The heightened activity and visibility of Turkish public and private institutions, companies and aid organizations throughout the Global South, including East Asia, has been underpinned by the growth of the country’s GDP and foreign trade.

During the 2000s, Turkey’s economic growth served as the main engine of its foreign trade as well as its official and humanitarian activities abroad. Turkey’s GDP steadily increased, peaking in 2013 at $950 billion. (See Graph 1) Thereafter, however, Turkey’s economy slowed, with GDP falling to $766 billion in 2018.

Turkey’s trade with East Asian countries increased sharply from $7.8 billion in 2000 to $57.8 billion in 2011, reaching $65.3 billion in 2017. (See Chart 2) The volume of Turkish exports to Asia, which started from a low base, has steadily grown, though not nearly as much as Turkish imports from Asia, leaving Turkey with a significant and expanding trade deficit. (See Chart 2)

In terms of the composition of trade, it should be mentioned that South and East Asia have become potentially lucrative regional markets for a wide range of Turkish defense industry products, including armored vehicles, drones, attack helicopters, tanks, and frigates. Accordingly, Turkey has sought to pursue cooperation in the defense sector with Bangladesh and Pakistan (in South Asia) and China, Indonesia, Malaysia, Philippines, South Korea, and Thailand (in East Asia).[13]

Turkish public institutions and NGOs have played prominent roles in support of Ankara’s humanitarian diplomacy. Turkish Official Development Assistance (ODA) soared from $85 million in 2002 to $1.3 billion in 2011, as Turkey climbed from 19th to 3rd among donor governments. [14] (See Graph 2). Since 2012, Turkey’s ODA climbed steeply from $1.3 billion in 2011 to $8.1 billion in 2017 despite the slowdown of the Turkish economy. It is not surprising that Syria, the source of the nearly four million refugees residing in Turkey, has received the lion’s share of this aid. Most of the rest of Turkish ODA has been allocated to neighboring and/or Turkic nations.[15]

Improvement of academic cooperation is one of the four pillars of the Turkey’s Asia Anew Initiative. Indeed, Turkey’s academic capacity has developed remarkably over the past two decades and has become a valuable instrument in supporting Ankara’s international engagement. For instance, Turkey’s international student population ballooned to 125,138 in the 2017-2018 Academic Year, including 25,000 scholarship students. Ankara aims to host 200,000 international students by 2023.[16]

It is important to note, however, that an exceedingly large proportion of Turkey’s international student population originates from neighboring and/or Turkic nations. (See Graph 3) Syrians, many of whom reside in Turkey, are dominant in Turkish universities. Azerbaijanis and Turkmen form the second- and third-largest contingent, respectively, because they speak Turkic languages and can easily integrate into Turkish society. The majority of college students coming to Turkey from Iran, Iraq, Germany, Greece, and Bulgaria are members of the Turkish minority or community in those countries. Turkey has also provided a high scholarship quota to Afghans and Somalis in an effort to contribute to the state building processes in the students’ native countries.

Turkey’s Asia Anew Initiative suffers from a lack of clarity as to its ultimate purpose and a lack of financial wherewithal and institutional capacity with which to implement, much less to sustain it over the longer term.

Ankara has stated that the main goal of the Asia Anew Initiative is not an “axis shift.” Turkish officials have also underlined that Turkey values its allies and at the same time aims to increase the number of its international partners. They have stressed that enhancing ties with a specific country does not necessarily mean giving up on its current allies.[17] Nevertheless, Turkish Eurasianists, including some members of Turkey’s ruling alliance and pro-government media, frequently depict Turkey’s relations with China and engagements with the SCO and BRICS as constituting an anti-Western shift in Turkey’s strategic orientation.[18] These conflicting arguments sow confusion among both the Turkish and international publics regarding the Asia Anew Initiative’s overarching purpose.

Furthermore, Turkish officials have yet to clarify how they intend to develop its relations with leading Asian countries like China, Japan, and India. It is also not clear enough how Turkey will position itself on sensitive inter-Asian issues such as the South China Sea, the East China Sea, and other territorial / maritime disputes. Neither is it clear that is Turkey is equipped to deal with, or at least avoid becoming embroiled in, the region’s complex economic and political problems, including the US-China trade war and the friction between Japan and South Korea.

Implementing the new opening to Asia could prove difficult, even if the initiative is intended merely as a means of diversifying its external relations, rather than part of some heretofore unspecified grand design to fundamentally change Turkey’s strategic orientation. The United States and possibly other NATO allies could, for example, apply export licensing or similar restrictions that might hamper Turkey’s ability to establish or expand defense cooperation with putative Asian partners.

A Question of Sustainability?

In order to implement the four-pillar Asia Anew Initiative, Turkey will have to find a way to overcome or somehow compensate for its limited financial and institutional capacity as well as other challenges.

The current state and short-term prospects for the Turkish economy do not seem conducive to a major new thrust into Asia. As previously shown, the expansion of Turkey’s trade with and other activities in Asia were largely a function of the country’s positive GDP trajectory. In the past several years, however, Turkey’s economy has experienced a downturn. The IMF expects Turkey’s GDP in 2019 to contract by about 2.5%.[19] These circumstances likely will crimp the Turkish government’s ability to augment its presence and influence in Asia and other distant neighborhoods. However, even in a more promising economic environment, Turkey would arguably find it difficult to sustain an expanded engagement in Asia of the kind outlined in the Asia Anew Initiative. After all, Turkey is a middle-income country that currently accounts for just 0.7% of the world GDP.[20]

The large-scale purges of Turkish civil servants following the July 15, 2016 coup attempt against President Erdogan have had a devastating effect on Turkey’s institutional capacity. More than 150,000 civil servants including academics, teachers, medical doctors, judges, prosecutors, police and military officers were dismissed.[21] If the government does not provide a pathway for dismissed staff to regain their jobs, Turkish bureaucratic and academic institutions will be set back for a generation. Turkey’s Ministry of Foreign Affairs (MFA), for example, has been operating at one-third under capacity for the past three years. The MFA can hardly be expected to fully staff the increasing number of foreign missions in Asia and elsewhere if this situation persists except perhaps with even more political appointees, rather than with seasoned career diplomats.[22]

Just as the MFA’s ability to engage its Asian and other counterparts has been impeded by the massive dismissal of experienced staff, so too have Turkey’s academic institutions. Over the past three years, an estimated 1,200 private schools, including 15 universities and 30 think tanks and research centers have been shuttered; 33,000 teachers and 8,000 academics from public institutions have been dismissed; and the teaching certificates of 22,000 teachers from the private sector have been cancelled.[23] This hemorrhaging of talent and expertise has resulted in a dramatic decline in the capacity and reputation of Turkish universities and academic institutions that will be difficult to rebuild and that call into question whether the promise of the Asia Anew Initiative’s education pillar can be even partially fulfilled.[24]

An extended period of impressive economic growth during the 2000s endowed Turkey with the financial means and self-confidence to strike out on its own and pursue a more expansive foreign policy. Turkey’s healthy GDP growth fueled its diplomatic, trade, humanitarian, and cultural activities across the Global South. The launch of the Asia Anew Initiative appears to represent a continuation of such efforts, rather than a “new” approach or a fundamental shift in Turkey’s strategic orientation. However, given Turkey’s current economic circumstances and institutional capacity constraints, there is reason to be skeptical regarding how much of a commitment the new opening to Asia will entail and how much of a payoff it will yield.

[9] Selçuk Çolakoğlu, “Has MIKTA augmented the global governance role of middle powers?” The Global, May 29, 2018.

[11] The only exception to this steady rise was 2009, the year of the global financial crisis.