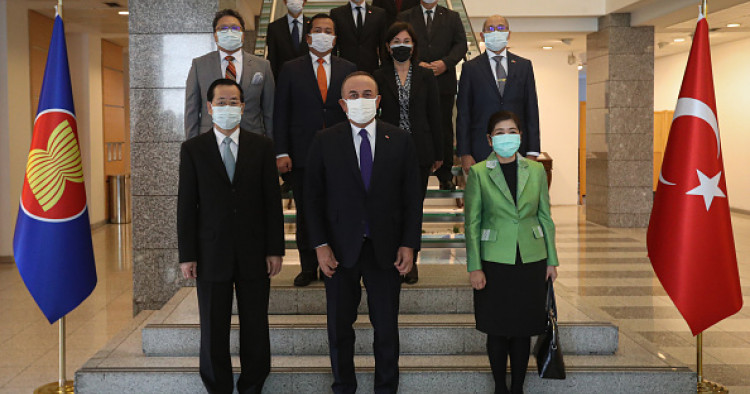 This essay is part of the series “Turkey Faces Asia,” which explores the development of cultural, political, and economic links between Turkey and the Indo-Pacific region. See more ...

Turkey initiated a strategy to engage Southeast Asian nations in the early 2000s[1] that resulted in the opening of new embassies and branches of numerous state-sponsored institutions across the region. With the launching of the Asia Anew Initiative in late 2019, Ankara has redoubled efforts to forge closer ties with the ten members of the Association of Southeast Asian Nations (ASEAN) and with ASEAN itself.

Building on a Foundation of Goodwill

Turkey has a considerable cultural influence in Southeast Asia owing to the region’s dense Muslim population and to historical links that date back to the Ottoman era. Turkey’s official relations with ASEAN members today are conducted through the dense network of bilateral and multilateral channels.

Turkey has maintained strong ties with with the Muslim-majority nations of Southeast Asia — Indonesia, Malaysia, and Brunei — through its membership in and activities carried out under the auspices of the Organization of Islamic Cooperation (OIC). At the bilateral level, Turkey has expanded its official representation in all ten ASEAN member countries.[2] Myanmar and Laos are the only ASEAN members yet to have opened an embassy in Ankara. In addition, and as discussed below, Turkey has become a sectoral dialogue partner of the 10-member ASEAN.

Turkish efforts to contribute to peace and stability in the region have earned goodwill. Together with Japan, Saudi Arabia, and Britain, Turkey has, as a member of the International Contact Group, helped facilitate peace negotiations between the Philippines government and Moro Islamic Liberation Front (MILF).[3] In its role as a non-permanent membership of the UN Security Council in 2009 and 2010, Turkey also played a part in solving the problems of Timor-Leste, which gained its independence from Indonesia in 2002. From 2006 to 2012, Turkey participated in the United Nations Integrated Mission in Timor-Leste (UNMIT), helped facilitate a constructive political dialogue within the country, and contributed to security sector reform.[4]

Turkey has positioned itself as a bridge between the developed and least developed countries of the world. Turkey hosted the First UN Conference on the Least Developed Countries (LDC-I, 2007) and LDC-IV (2011) as well as the World Humanitarian Conference (2016) — multilateral forums that provided venues to establish and maintain regular contacts with Cambodia, Laos, and Myanmar.[5] Acting on Turkey’s commitment to global efforts aimed at poverty eradication and sustainable development, TIKA, with resident offices in Yangon (Myanmar) and Manila (Philippines),[6] has provided project assistance that totaled nearly $148 million between 2005 and 2015.[7]

Trade Relations: The Promise and the Challenges

Although the trade volume with ASEAN countries was negligible in the early 2000s, trade relations later showed promising signs of growth. Turkey’s total trade with all ASEAN members had remarkably increased from $1.1 million in 2000 to $12.1 billion in 2017 before dropping to $7.9 billion last year. (See Table 1) The sharpest increases in Turkey-ASEAN member trade flows were with the so-called “ASEAN Five” (Indonesia, Malaysia, Thailand, Vietnam, and Singapore) —  the region’s most dynamic economies.

Yet, even in this period of robust growth, Turkey found itself facing a large and increasing trade deficit with its leading ASEAN partners, except Singapore, the Philippines, Brunei, and Laos. Turkey’s trade with Myanmar and Cambodia was on the rise in the past decade. Laos and Brunei have less trade with Turkey in the region. Nevertheless, Turkey’s highest bilateral annual trade volume with a regional country barely reached $3.5 billion. (See Chart 1).

Turkey has managed to reach free trade agreements (FTAs) with Malaysia and Singapore, in 2015 and 2017, respectively. [8] However, these breakthroughs have not yet significantly boosted the trade volume or narrowed the trade imbalance.

As Table 1 and Chart 1 show, the Turkey-ASEAN trade volume appears to have peaked in 2017, and then plummeted. Furthermore, no country in the Southeast Asia features among Turkey’s top-15 trading partners.[9] Additionally, Turkey’s FDI to ASEAN experienced 38% negative growth from 2018 to 2019, dropping  from $45 million to $28 million. In the same period, the number of tourist arrivals from Turkey to ASEAN countries fell from 81,000 to 54,000.[10] These declining figures likely stemmed from the depreciation of the Turkish lira to a record-low level against the US dollar.[11]

The launching of the Turkey-ASEAN Sectoral Dialogue Partnership represents a relatively new and promising vehicle for advancing Ankara’s objectives in Southeast Asia. Turkey first decided to establish institutional ties with ASEAN in 1999 but waited nearly a decade to take the first step. Turkey signed the ASEAN Treaty of Amity and Cooperation (TAC) on July 23, 2010 during the 43rd ASEAN Foreign Ministers’ Meeting (FMM) in Hanoi. The Turkish Ambassador in Jakarta was accredited to ASEAN in September of the next year. In 2014, Turkey obtained observer status in ASEAN’s multinational police force;[13] and three years later,  earned the status of “Sectoral Dialogue Partner.”[14]

ASEAN and Turkey convened the First ASEAN-Turkey Joint Sectoral Cooperation Committee (AT-JSCC) Meeting on May 30, 2018 in Singapore to mark the launch of the Partnership. The “ASEAN-Turkey Sectoral Dialogue Partnership: Practical Cooperation Areas (PCA) for 2019-2023” was accepted at the Second AT-JSCC Meeting in Bangkok on July 18, 2019. PCA serves as the overall framework and priorities for engagement and cooperation between ASEAN and Turkey..[15] The third meeting of the AT-JSCC held via videoconference on December 4, 2019 during which Ankara declared the establishment of an ASEAN-Turkey Fund  to support the implementation of cooperative activities.[16]

In a meeting with ASEAN Ambassadors in Ankara on January 6, 2021, the Turkish Foreign Ministry issued a statement reiterating the importance of improving ties with ASEAN countries. Ankara’s ultimate objective for developing its relations with ASEAN is to achieve “Dialogue Partnership,”[17] though there is little indication that this will occur anytime soon.[18]

Over the past two decades, Turkey has made remarkable progress in engaging Southeast Asian countries in the diplomatic and economic spheres, while institutionalizing its relationship with ASEAN. However, more recently, Turkey’s relationship with ASEAN has plateaued. Looking ahead, Beijing, whose influence in Southeast Asia has grown as a result of the forging of the Regional Comprehensive Economic Partnership (RCEP), might support Turkey’s efforts to consolidate ties with ASEAN, as a means of counterbalancing India.[19] Nevertheless, it seems unlikely, given Turkey’s declining material capacity, that its goal of becoming an ASEAN Dialogue Partner will soon be within reach.

[3]  Selçuk Çolakoğlu, “Can the Mindanao Peace Process end with a success story?” The Journal of Turkish Weekly, July 2, 2014.