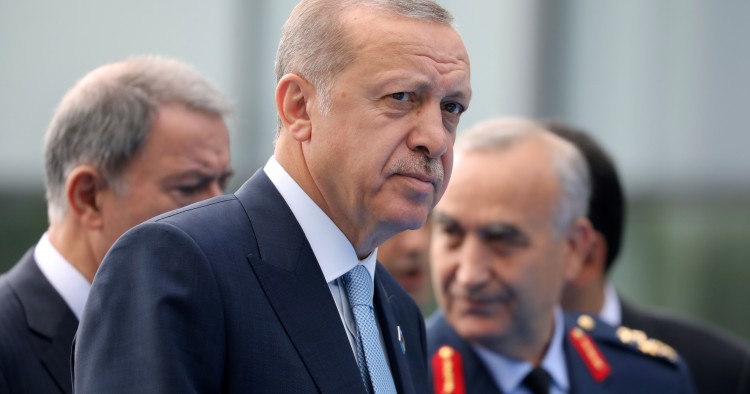 2019 will likely be an unhappy year for Turkey. Turkey-U.S. relations are as bad as they were in January 2018, when the U.S. announced a Kurdish self-defense force for Syria — or may even have gotten worse. The U.S. now wants a negotiated deal with Turkey that will protect the Syrian Kurds. President Donald Trump intended to give Mr. Erdogan a gift last month when he announced the pull-out of American forces. Instead, the gift he delivered actually went to Moscow, Damascus, and Tehran, which now will have even more to say about what the Turks do in Syria than the U.S. will. Turkey is still on the defensive with Russia over its failed promise to remove al-Qaeda groups in Idlib. Clearly the junior player in the peace process, Turkey will have to settle for whatever Russia, Iran, and Syria deem appropriate. In light of the recently announced withdrawal, there is little the U.S. could do to help Turkey in any case.

Even if Turkey and the U.S. were on the same page, serious issues would remain involving equipment, bases, the use of air power, and the possible return of U.S. forces if needed to fight ISIS. Turkey says it will continue the campaign against the terrorist group, but the center of ISIS’s strength lies hundreds of miles south of the Turkish border. Furthermore, the U.S. does not have any standing to promote a buffer zone along the border in the wake of the withdrawal announcement. It lacks the means to enforce such a deal; only Syria plus the Astana Three — Russia, Iran, and Turkey — could agree to such a zone.

The recent shakeup in the Turkish military leadership reflects a difficult internal debate over what Turkey can actually do in northeastern Syria. Does Turkey believe it has the capacity to take and hold territory in northeastern Syria against the expressed desires of Russia, Syria, and Iran? If Ankara is bluffing, a setback will highlight its inability to accomplish its goals.

Ankara’s current positive press statements belie its underlying rigidity regarding any opposition to the government’s plans. Turkey uses the word “terrorist” liberally; it has made a habit in recent years of labelling those with whom it disagrees as terrorists, even including opposition politicians, journalists, philanthropists, university faculty, and, remarkably, the Turkish NBA player Enes Kanter. Outside Turkey, few are confident that Ankara intends to fairly distinguish between “good” Kurds and “bad” Kurds once combat begins. Turkey has consistently denied any role for Kurds in a Syrian peace settlement, a position much broader than opposition to the People’s Protection Units (YPG). Yet, neither Moscow nor Damascus has labeled the Kurds terrorists, and both maintain negotiating links to the Syrian Kurdish leadership.

Mr. Erdogan, as he did with the incursion into Afrin, is also targeting the Kurds to gain support before the next elections, this time the municipal elections on March 31. With the country’s economy facing structural inflation and higher unemployment, especially for the young, the governing Justice and Development Party (AKP) risks further erosion of its base.

Nothing shows this more clearly than the government’s dependence on the right-wing Nationalist Action Party (MHP) to win the next elections and maintain power. Mr. Erdogan knows how to win elections and bends his policies, in foreign as well as domestic affairs, only to that end.

More broadly, as many have observed, the entire picture of Syria and the Middle East has changed since Mr. Trump’s withdrawal announcement. In his one tweet in December, Trump also effectively abandoned the UN and Astana peace process. Secretary of State Mike Pompeo gamely attempted in his recent trip to convince the world that U.S. policy has not changed, but, of course, it has. Today, Mr. Trump appears erratic, John Bolton seems confrontational, and Mr. Pompeo plays the conciliator. These three roles cannot continue to exist together, and the contradictions now are eroding American influence in the region. Whatever talks Washington holds at the working level with Ankara, this confusion will always provide the backdrop until U.S. policy is clear — and consistent.

Nor does the Middle East look forward to an expansion of Turkish regional power — politically or militarily. Mr. Erdogan adroitly has used the murder of Saudi journalist Jamal Khashoggi in October 2018 to weaken Saudi standing in the Middle East and to embarrass the U.S. over its continuing support for Riyadh. But he has not toppled the Saudi government. He has three military bases in the region, in Qatar, Sudan, and Somalia. No Arab country can say the same, and his Arab neighbors have taken due notice. His determined support of the Muslim Brotherhood, something he does not talk about internationally, is rejected forcefully by Egypt, Saudi Arabia, and the UAE, and continues to represent a minority movement regionally. Turkey’s economic wealth cannot match that of Saudi Arabia and the Gulf States. It is telling that the Gulf States now are courting Israel; they clearly see Iran as the greater threat, even as Turkey voices no objection to Iranian troops in Syria. Arabs remember Turkey as a colonial master, not as a benign friend, and have no desire to join a Turkey club.

Turkey, in Mr. Erdogan’s vision, is destined to become a kind of virtual Ottoman Empire, with the cultural, political, economic, and military power to enter the circle of the world’s top ten countries. He has aspired to a UN seat for the Muslim world, stating repeatedly that “five is not enough” for permanent membership on the UN Security Council. He has lamented the loss of Ottoman territory, calling Turkey’s 1923 peace settlement engineered by Mustafa Kemal Ataturk a failure. Throughout his career, he has never articulated his long-term goals, but his actions suggest what they are. His problem today is actually the same one that faced the Ottoman Empire in its later centuries: he lacks the resources to accomplish his goals. Normally, a leader in that position would befriend those who could provide him support. In today’s world, for Turkey that would ordinarily mean working with Europe and the United States within a broader global community. Turkey once seemed to be on that path. Mr. Erdogan insisted on a different direction, and now the task is considerably more difficult.