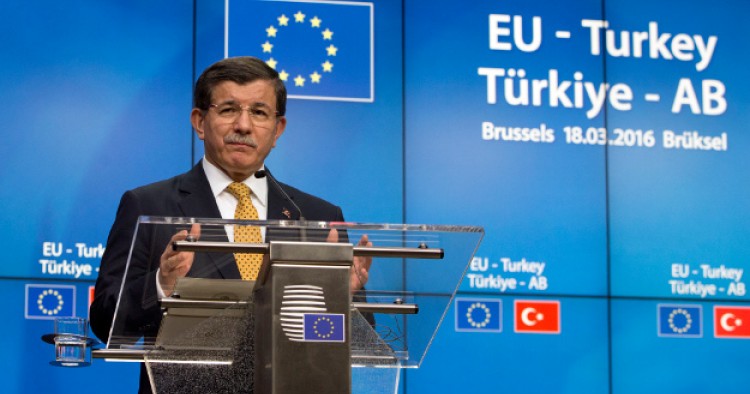 The European Union and Turkey agreed March 17 on a plan to address the Syrian refugee crisis. Under the deal any migrants arriving in Europe, starting next week, will be sent back to Turkey. Ankara, in exchange, will receive expedited aid intended to help Syrians in Turkey, as well as the promise of reignited E.U. membership talks.

Gönül Tol, director of the Center for Turkish Studies at the Middle East Institute, asked four experts to share their takes on the Turkey-E.U. deal. These experts assessed the positive and negative implications of the deal for Turkey and the European Union, including whether or not Europe’s desperation to end the refugee crisis will strengthen the chances of Turkish accession to the European Union.

The Turkey-Europe deal on refugees is in survival mode. The European Union is striving to concoct an internal consensus to move forward with an ambitious framework of cooperation. The Turkey-E.U. relationship stands to benefit from such a deal. Firstly, Europe’s promise to open at least one chapter of the accession talks will provide much-needed momentum to the Turkey-E.U. relationship. It would, at the same time allow the European Union to recuperate some of its former influence over Turkey. By the same token, the revitalization of the accession talks would enhance the credibility of the accession process and empower, after a long standstill, the pro-reform constituency in Turkey. Settlement of the Cyprus problem, a frozen conflict dating back more than a half century, would further strengthen this forward momentum.

But for the Turkey-E.U. relationship to be crowned with an eventual Turkish accession, more is needed. In Turkey, there needs to be a genuine effort for wholesale democratic reform. This can only be generated if the E.U. accession process remains on track and is devoid of uncertainty. At the same time, the European Union should eventually be in a position to rid itself of the ambiguity that has plagued its relationship with Turkey. For that, the European Union will need to overcome the manifold crisis that it currently faces so that it can develop the self-confidence to justly deal with a large candidate country like Turkey. ​

Aykan Erdemir, former member, Turkish parliament (2011-2015), and senior fellow at the Foundation for Defense of Democracies:

The European Union has designed its deal with Turkey with the hope of finding a mutually beneficial solution to the refugee crisis: rescuing both displaced Syrians and vulnerable European politicians, while also reenergizing Turkey’s E.U. membership talks. But what was supposed to be a win-win deal is likely to be lose-lose for all involved—harming not just Syrian refugees and European politicians’ careers, but also Turkey’s flailing democracy, and with it, its odds of joining the European Union.

Erdogan’s emboldened self-confidence from the deal, combined with the ongoing terror attacks in Turkey’s main cities, is a recipe for disaster, encouraging further breaches of rights and freedoms in the country. Nor is this the first time the Turkish leader has challenged his European counterparts at critical junctures: he also cracked down on media outlets critical of his government just days before the E.U.-Turkey summit of November 2015. Both then and now, Europe turned a blind eye to Erdogan’s authoritarian tactics and appeased him through offers of new rounds of accession talks, visa-free travel, and financial assistance.

Now, the European Union’s brewing Faustian deal with Ankara will turn out to be a catastrophic miscalculation for both sides. Brussels has not only lost its moral high ground in its relations with Ankara but caused Turkey’s further drift away from E.U. values. Ultimately, the deal will confirm to skeptical Turks that the bloc never intended to allow Ankara into its club after all.

The 2015 refugee crisis demonstrated that Turkey is an important partner for the European Union, even if it is not yet a member. The European Union saw a cooperation scheme with Turkey as the most likely choice for the protection of the European Union’s external borders. It is, of course, the inability of E.U. states to find a common solution to the refugee crisis that exacerbated the problem. The refugee crisis demonstrated that the E.U. depends on Turkish cooperation in controlling illegal immigration. The Turkish-E.U. deal showed that Turkey also has an important role to play in the field of justice and home affairs. This importance is illustrated by the decision to hold Turkish-E.U. bilateral summits. It needs to be noted that this is the first time that the European Union is holding bilateral summits with a candidate country, indicating a unique approach to Turkey’s candidacy.

An institutionalization of Turkish-E.U. summits also might mean that a new form of an ‘extended council’ might emerge for Turkish-E.U. relations, where the two parties could discuss and decide upon matters of common interest. This is an important development indicating that even without membership, a different form of cooperation might be emerging. It is for this reason that the European Union began to develop a new mode of integration with Turkey and adopt new institutional tools. However, one must note that this new modus operandi does not necessarily mean a fast track for Turkey’s E.U. membership. The main obstacles to Turkey’s accession—vetoes from Cyprus and France on the opening of some chapters, Turkey’s problems with regards to meeting the E.U. norms and criteria, and the European Union’s reluctance towards further enlargement—are still very much present, slowing down the negotiation process. The revitalization of Turkish-E.U. relations signals that even if membership has still a long way to go, Turkey plays a critical and multifaceted role for the European Union.

The Summer 2015 refugee crisis proved that despite calls by Commission President Jean-Claude Juncker and German Chancellor Angela Merkel for unity and fair distribution of refugee quotas, a strong sense of solidarity in Europe proved to be missing. Given the failure of E.U. countries to appropriately respond to the crisis, strengthened border control measures in and outside the European Union were proposed. This resulted in the E.U.-Turkey deal as a pragmatic and strategic solution.

Turkey aimed to use the E.U.-Turkey deal as an opportunity to reinvigorate accession negotiations. If managed skillfully, the E.U.-Turkey plan could have served this purpose and supported a major public policy campaign both within and outside Turkey. However, the negotiations at the latest summit presented a process of Grand Bazaar bargaining. They focused mainly on the financial side and visa-free travel instead of the revitalization of the E.U. accession process or providing a humanitarian refugees protection system in line with international legal obligations. This has definitely affected the credibility and the ethical aspects of these negotiations. If the parties fail to shift the focus of the deal to international refugee protection, the deal will be problematic in the long-term and negatively affect Turkey-E.U. relations. During the implementation of the plan, the European Union’s normative goals and aspirations should not be overlooked.

The European Union needs Turkish cooperation in the fields of irregular migration, human smuggling, terrorism, and organized crime. All of these issues require transnational action. If the values of democracy, human rights, fundamental freedoms, and the rule of law are undermined during the planning and the implementation of the deal, the legitimacy of the European Union will be questioned both within and outside its borders.