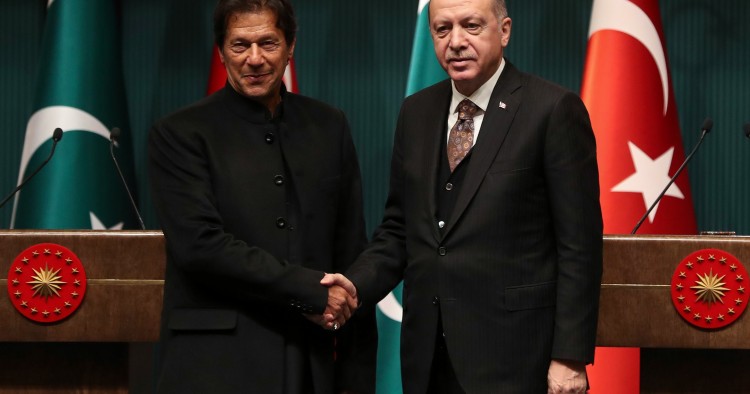 In the run-up to Turkey’s April 2017 election, the ruling Justice and Development Party (AKP) ran a big-budget commercial that fantasized about Turkey’s popularity in the Sunni world. It features idealized scenes of Muslims around the world extolling Turkey for its contributions both ancient and modern — including shots of Kazakh children staring in wonder as a village elder tells them of the vast conquests of the Turks, Palestinian children being taught about Saladin’s victories in the madrassa, and Bosnians celebrating a win by the Turkish national soccer team. The scene in Pakistan goes furthest of all. In it, a Turkish couple are sitting in a café. They ask for the check, and when it comes, the receipt simply says, “Erdoğan has paid the bill.”

Incredulity aside, the Pakistani segment of the commercial was meant to pay tribute to the strong relationship that President Recep Tayyip Erdoğan has forged between Turkey and Pakistan — a relationship that Pakistan has eagerly reciprocated. While Erdoğan has always enjoyed relatively warm relations with Pakistan, it was during the failed July 2016 coup attempt in Turkey that Pakistan displayed its unequivocal support for Erdoğan. In a show of solidarity, Prime Minister Nawaz Sharif called the embattled Turkish president in the midst of the coup and visited the Turkish parliament shortly after it was put down. Since then, eager for foreign support, particularly from the Sunni world, Erdoğan has doubled down on his efforts to establish closer ties with Pakistan.

By 2017, Turkish investment in Pakistan surpassed $1 billion, and Turkey has continued to pursue projects there, such as the export of its Metrobus rapid transit system. A proposed free trade agreement (FTA) between the two countries — still in the works — projects that bilateral trade will increase from $900 million to $10 billion by 2022. With the continued expansion of Turkish Airlines and the growth of Istanbul as a regional aviation hub, Pakistanis are increasingly flying on the airline and stopping in Turkey en route to the West. Although Pakistanis currently need a visa to enter Turkey, an FTA would also facilitate freedom of movement between the two countries, and Turkey, looking to boost tourism from Islamic countries to make up for a loss in Western European tourists in recent years, has much to gain from potential mass tourism from Pakistan.

Turkey has long been considered an economic and political model for Pakistan, albeit in ways that have changed over time. General Pervez Musharraf, a former Pakistani military leader and president, admired Mustafa Kemal Atatürk, the founder of the Turkish republic, for his secular reforms and strong-handed rule. Musharraf, who spent part of his childhood in Turkey, made clear his hopes that Pakistan would follow a Turkish path to modernity. However, Musharraf’s admiration for Atatürk came at a time when the era of military tutelage in Turkey was being challenged by the relatively democratic first decade of Erdoğan’s rule. Pakistan’s current prime minister, Imran Khan, has called Erdoğan one of his “political heroes” due to his besting of the 2016 military coup. For both Erdoğan and Khan, the justified fear of military coups is a significant source of solidarity.

On the international stage, Turkish-Pakistani solidarity has been strong for decades, and both countries have supported each other on internal matters as well as problems with their respective neighbors. Pakistan’s relationship with Turkey is also tied in with Azerbaijan, another significant ally, and this axis comes at the expense of Armenia — to the extent that Pakistan is the only country in the world that does not recognize its existence. Unsurprisingly, Pakistan also recognizes Azerbaijan’s claims over the disputed territory of Nagorno-Karabakh, a position which it shares with Turkey.

In return, Turkey has recently taken steps to more definitively assert its support for Kashmiri independence or a bilateral agreement between India and Pakistan regarding its status. During the recent skirmishes between the two countries in 2019, Khan and Erdoğan held frequent discussions on how to peacefully diffuse the situation, and Erdoğan praised Khan’s decision to release an Indian pilot who was shot down over Pakistani territory. Part of Erdoğan’s increasingly vocal support for Pakistan’s position on the Kashmir issue is due to his broader effort to style himself as the defender of Muslims worldwide, which is meant to shore up support at home just as much as abroad.

Turkey and Pakistan share similar problems with internal separatism and terrorism and have often offered assistance to each other to address these issues. Pakistan supports Turkey in its conflict with the Kurdistan Workers' Party (PKK), voicing strong backing for Turkey and Erdoğan when hostilities between Ankara and the PKK resumed in the summer of 2015 following the collapse of the peace process. Taking note of Pakistan’s experience in its struggle against internal insurgents, the Turkish military even requested Pakistani intelligence and material support as it ramped up its campaign against the PKK in the latter half of 2015.

One of the most pressing issues that has faced Pakistani-Turkish relations was that of PakTurk schools. Set up as part of a global network by Fetullah Gülen, an influential cleric and one-time ally of Erdoğan, PakTurk schools were dedicated to promoting Turkish culture as well as educating young Pakistanis about Gülen’s religious and political ideas. Following the 2016 coup attempt, for which Erdoğan blamed Gülen and his Hizmet movement, the Turkish leader began to demand that other countries follow his lead by branding Gülen and his supporters as terrorists and shutting down their schools.

The government of Pakistan first responded by refusing to renew the work and residence visas of the PakTurk schools’ Turkish staff, forcing many of them to leave; some were refused entry to other countries as asylum and subsequently returned to Turkey to face indefinite imprisonment. In early 2019, the Supreme Court of Pakistan declared the Gülenists to be a terrorist organization and ordered that PakTurk schools be handed over to the Maarif Foundation – an Islamic school organization established by the Turkish government to counter Gülenist influence — a clear nod of support to Erdoğan.

On Pakistan’s terrorism problem, which is deeply entangled with Afghanistan, Turkey’s support has been less straightforward and more tethered to realpolitik and ideological concerns, largely due to its own complex web of alliances in the region. While Turkey and Pakistan both supported the mujahedeen during the Soviet occupation of Afghanistan — due to their alliances with the United States and their natural preference for the Islamic actors in the conflict — their interests began to diverge with the ascendency of the Taliban, a movement which had its origins in Pakistan itself.

While the American invasion of Afghanistan in October 2001 would force Pakistan to reluctantly side with the international community on the issue of the Taliban, certain Turkish-backed Afghan rebels continue to harbor deep distrust and outright hostility toward Pakistan. This was most notable with Abdul Rashid Dostum, an ethnic Uzbek with close ties to Turkey. Upon becoming one of Afghanistan’s two vice presidents under Ashraf Ghani’s government, Dostum took a strongly anti-Pakistani stance, declaring in 2015, “If Pakistan is playing with us for many years, we must also cut our diplomatic relations with them.” While Dostum’s threats have not come to much, he continues to remain a thorn in Pakistan’s side, and Turkey has shown no sign of giving up its support for him — even sheltering him when he was exiled on several occasions.

Nonetheless, Ankara’s support for anti-Pakistani figures in Afghanistan has not reduced its diplomatic clout in the region, and recent developments show that Erdoğan’s close relationship with Khan has only enhanced Turkey’s role as a potential peacemaker in the conflict with the Taliban. In a joint conference with Khan, Erdoğan announced that following local elections in Turkey on March 31, Istanbul would host peace talks with the Taliban and the governments of both Afghanistan and Pakistan. It is unclear if and when those talks will take place, but were they to yield results, it would be a major victory for Erdoğan and enhance his much-desired reputation as a leading figure in the Islamic world.

Until recently, the close relationship between Pakistan and Turkey has largely been ceremonial in nature and has yielded little in the way of significant, concrete results. Under Erdoğan’s leadership, Turkey has actively worked to cultivate closer ties with the Sunni world, long neglected by his predecessors. While Erdoğan’s successes and failures with the Arab world have been much documented, his budding relationship with Pakistan could help make up for his losses elsewhere. With similar security concerns regarding foreign enemies and domestic insurgencies and a shared insecurity regarding military coups, Pakistan and Turkey are well placed to build closer ties in areas ranging from trade to culture. Should the proposed Istanbul peace talks or the FTA come to fruition, the Pakistani-Turkish relationship could take on even greater significance for both countries.

Philip Kowalski is a freelance writer and a research assistant intern at the Middle East Institute. He previously lived in Turkey from 2012 to 2016. The views he expresses are strictly his own.