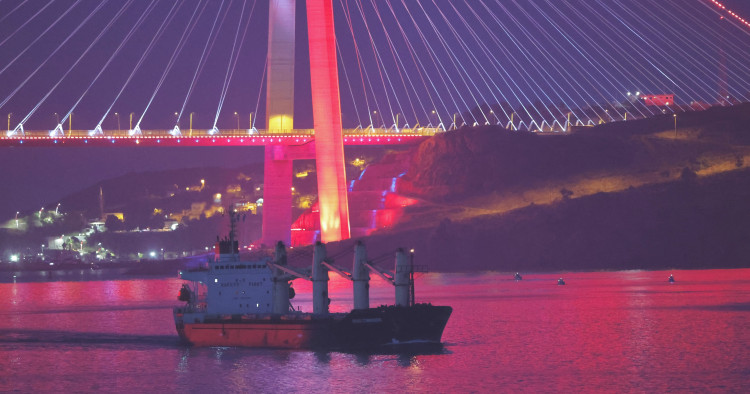 The Ukraine grain export deal, which Turkey helped mediate over the summer, was saved last week to much fanfare, apparently after Turkish President Recep Tayyip Erdoğan again intervened; but it is only a very small part of a much bigger problem. The central issue remains lifting Russia’s illegal blockade of Ukrainian ports, so Ukraine can freely trade with the world. That, not the grain deal per se, would do the most to resolve the global food crisis. The international community should not necessarily put energy into renewing the deal, because Russia has never truly engaged with it seriously and instead used those negotiations as a tactic to delay and distract from its wartime activities. Russia will almost certainly try to create a new crisis before the 120-day agreement expires on Nov. 22.

Russia’s veto over freedom of navigation in the Black Sea

While being on speaking terms with the Russians keeps the door to diplomacy open, it fails to address the critical underlying problem created by the grain export deal. The de facto situation is that Russia effectively has a say over who comes in and out of the Black Sea — an infringement of the fundamental law of the sea concept of freedom of navigation. The grain deal may be safe today, but it risks normalizing Russia’s blatant violation of international law in the Black Sea. Under the current arrangement, which Kyiv and Moscow each signed with the United Nations but notably not with one another, Russia is permitted to inspect international vessels of sovereign nations traveling to and from Ukraine’s Black Sea ports. Even though Ankara had helped to mediate this outcome, it is an outrageous situation that should not be acceptable to Turkey.

What the Turkish government seemingly fails to understand is that Russia’s full-scale aggression toward Ukraine upended the entire post-World War II European political landscape. And the idea that mediation may help Russian President Vladimir Putin sign a peace deal in Ukraine “on terms that would not be too shameful for him” may be a total misreading of the new landscape that came into being after Feb. 24, 2022.

Turkish pro-government media outlets have hailed President Erdoğan’s role in encouraging Moscow’s return to the U.N.-brokered deal on Ukrainian grain exports, after Putin suspended its participation on Oct. 29. Russia announced that this decision was purportedly in retaliation for a “massive” Ukrainian drone attack on the Black Sea Fleet headquarters in Sevastopol, in occupied Crimea.

“I called Putin; they opened the grain corridor,” Erdoğan said in a live interview on Nov. 2, broadcast on the pro-government channels A Haber and ATV, referring to his phone conversation with the Kremlin leader the previous day. Turkey’s president, who has sought to play a mediating role between Moscow and Kyiv since the start of Russia’s 2022 invasion of Ukraine, framed the revival of the grain deal as justification for his continued outreach to Putin.

Yet Ukrainian commentators saw Moscow’s about-face return to the grain export scheme as a sign of weakness amidst Ankara’s own growing role in the region. Serhiy Sydorenko, the editor-in-chief of the reputable foreign affairs website Yevropeyska Pravda, said on YouTube that Putin “fell flat on his face” by returning to the grain deal because he needs the Turkish president’s international support. “Erdoğan pressed an ultimatum to Putin: return to the grain deal.” Sydorenko continued, “…because the grain deal is everything for Erdoğan, he bet very much on it. For him, it is about international prestige, about relations with the Gulf and North African countries.” Whereas Putin, the Yevropeyska Pravda editor added, realized that the world was “not afraid” of his bravado and so was chastened into backing down. “ ‘Russia’s greatness’ was just enough for one smack on the head from Erdoğan,” an advisor to the Ukrainian presidential office, Oleksiy Arestovych, posted on Facebook.

The foundations of current Turkish-Russian ties

Ankara clearly condemns Moscow’s ongoing war of aggression, as it has since Russia’s original 2014 invasion of Ukraine — even as some other European allies were trying to formulate deals that would effectively hand Crimea to Russia. And it has notably sold and transferred weapons systems to Ukraine that have played a crucial role in defending against the Russian onslaught. Yet so far, Turkey has not joined the Western sanctions against Russia, and it has even sought to further deepen trade ties with Russia in recent weeks by discussing additional natural gas deals and construction of a second nuclear power plant.

The Turkish media and political landscape is also awash in uncritical parroting of Russian talking points and disinformation. This tendency begins right at the top. For example, Erdoğan contrasted his vision for bilateral relations with the Kremlin with the approach of leaders he met at the recent European Political Community summit in Prague, whom he rebuked for “badmouthing Putin.” “If you show such negative attitudes everywhere to the head of a state like Russia [...] it will retaliate. If you, as a leader, are attacked this way, would you approve of it?” Erdoğan asked rhetorically. He also said he and Putin had raised the issue of prioritizing grain transfers to “Djibouti, Somalia, and Sudan,” where, he asserted, “people are dying from hunger.” In fact, this year’s commodities crises across Africa and the Middle East were sharply exacerbated, if not outright sparked, by Russia’s unprovoked aggression toward its sovereign southwestern neighbor; and this precarious economic and humanitarian situation in the Global South can only be truly solved when Russia stops its illegal blockade of Ukrainian ports. The crisis is deepened and complicated further by Russia stealing Ukrainian grain and selling it on the world market as if it were its own. Once again, Putin the arsonist is acting as the firefighter.

The fragility of a personalized relationship

Erdoğan and Putin have met face-to-face four times in the past four months, at each opportunity pledging closer trade and energy ties amid the economic turbulence aggravated by Russia’s invasion of Ukraine. In particular, Erdoğan is counting on discounted energy offers from Putin ahead of key elections scheduled for June 2023, in the hopes that this can help resolve Turkey’s current financial crisis, which has featured the sharpest inflationary surge the country has experienced since World War II. Gönül Tol, the head of MEI’s Turkish Studies program, has also suggested that Putin could further interfere in Turkey’s internal politics by green-lighting a new Turkish military offensive in Syria just before next year’s elections.

However, as Kommersant business daily columnist Dmitry Drize warned last month, Russia’s bet on the Turkish president carries risks: Ankara could easily change course if Erdoğan loses the elections. This outcome would prove to be a serious blow for Moscow, as the relationship is more personalized than institutionalized, and it would harm Russia in both the economic and security spheres.

The value of Turkey’s imports from Russia more than doubled in the first nine months of 2022 compared to the same period last year, with trade ministry figures showing Russia topping the list of countries that Turkey imports from. Energy purchases accounted for most of the rise, especially since the re-invasion of Ukraine and Europe’s self-imposed embargoes on Russian hydrocarbons: Turkey has become one of the biggest buyers of Russian crude and coal.

The value of Turkish exports to Russia has also risen sharply, particularly now that Turkey has turned into one of the few remaining logistical links to the outside world for Russia. Indeed, reports reveal that likely dozens of Western companies are bypassing international sanctions by accessing the Russian market via Turkey.

There has additionally been an unusual uptick in capital flows of unknown origin to Turkey. The country logged a “record high” of $28.3 billion in “net errors and omissions” in the first eight months of this year, likely from Russian oligarchs looking for safe places to park their wealth or from Russia’s state enterprises, such as Rosatom transferring dollars to finance its construction of the Akkuyu nuclear power plant in southern Turkey. In either case, such inflows of liquidity are extremely welcome as Turkey seeks to finance its large current account deficit with questionable and unorthodox financial policies.

Finally, there are the military prestige considerations for the Kremlin. For Russia — which suffered major battlefield defeats in Ukraine since February and whose Black Sea naval forces are in worse condition than all four of its other fleets and flotillas — Ankara keeping the Turkish Straits closed represents an unintended lifeline of sorts. When the 2022 Russo-Ukrainian war began, Turkey quickly invoked its rights under the 1936 Montreux Convention and closed the Bosporus and Dardanelles to all naval traffic not home-ported in the Black Sea — Russian, Ukrainian, but also that of outside powers. By keeping out all extra-regional naval vessels, this continued closure of the Straits actually helps prevent Russia’s further humiliation in the Black Sea, were the North Atlantic Treaty Organization (NATO) to expand its presence in the region substantially.

Time for NATO to show its flag

So far, arbitration efforts and phone calls from Erdoğan have done little to change Putin’s political-military calculations. If Russia won’t respond to diplomacy, then it is time for NATO to put a meaningful defensive naval presence into the Black Sea to protect merchant traffic going to and from Ukrainian ports — and not just because the Alliance stands on the side of Ukraine. By keeping Ukraine’s ports open, the Euro-Atlantic community would address the larger question: maintaining freedom of navigation in the Black Sea, which has implications for all other littoral states, including NATO members as well as strategic partner countries like Georgia. But it would also go a long way toward easing the systemic pressures on global commodities markets that have so greatly harmed countries in the Middle East and across the Global South over the past year.

Yörük Işık is a geopolitical analyst based in Istanbul, where he runs the Bosphorus Observer, a consultancy analyzing maritime activity on the Turkish Straits. He is also a non-resident scholar with MEI’s Turkey Program.

The image is courtesy of the author.