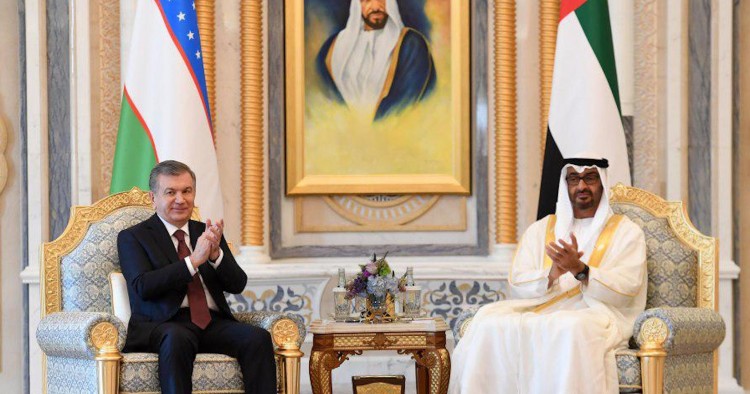 Until two decades ago, Central Asia was a Russian playground, first during the time of the czars and later as part of the Soviet Union. Then China, on its way to becoming the world’s second-largest economy, began investing in the region to obtain oil, gas, and minerals, as well as road and rail alternatives to shipping its products to Europe by ocean. In the past decade or so, Middle Eastern countries have begun to follow suit, and while other Gulf states are still laying the groundwork in the form of memorandums of understanding and initial framework agreements, the United Arab Emirates (UAE) is taking the lead in investing in Central Asia. The most recent round of courtship was the late March visit of several Central Asian leaders to the UAE, including the presidents of Kazakhstan and Uzbekistan.

Great power competition
The latest Gulf outreach comes at a time of growing great power competition in the strategically important region. The resignation of Nursultan Nazarbayev, Kazakhstan’s septuagenarian president, will increase that competition, as Russia, China, the United States, and the European Union woo his successor.

Both geopolitical and economic interests are driving the Gulf’s pivot toward resource-rich Central Asia, a region whose countries also aspire to become an indispensable part of China’s One Belt, One Road project.

When it comes to investment, Central Asia can use all the help it can get right now. Petroleum prices are far off their peaks of a few years ago, resulting in economic hardship across the region and prompting governments to take measures like Kazakhstan’s depreciation of its currency, the tenge, and Turkmenistan’s food rationing.

Central Asian governments have had little success diversifying their economies away from oil and gas. Although they have crafted ambitious development programs to achieve diversification, they are struggling to implement the costly projects because they lack the Gulf states’ financial resources.

In addition to cash to fund projects, the Gulf states can also provide Central Asia with guidance based on their own experience with diversification, increasing their clout. The UAE has been diversifying its economy for years, and Saudi Arabia created Vision 2030 several years ago to do the same. Moreover, above and beyond simply bolstering Central Asia’s economies, Gulf state investment could also have a broader impact by helping to counter Russian and Chinese influence in the region.

Russia and China
Although U.S. and European companies have poured billions of dollars into Central Asian petroleum production — particularly in Kazakhstan — Russia and China have the greatest influence because of their proximity and ability to move the region’s oil and gas to market. Pipelines in Russia deliver most of Kazakhstan’s oil to the West, while most of Central Asia’s gas exports travel through a 7,000-kilometer pipeline to China.

Russia used to handle more of the region’s gas exports, but it has failed to persuade Turkmenistan to send gas its way again after a three-year interruption stemming from a price dispute. Last year Russian Energy Minister Alexander Novak announced that imports would resume on January 1, 2019 — but so far they haven’t.

China plans to increase its Central Asian gas imports while expanding its economic presence in the region. A development that signaled how serious Beijing is about using Central Asia as a commercial corridor came in 2017, when the first goods-laden train from China roared through Kazakhstan on its way to London.

China’s growing influence in the region has hit a few potholes, however. One is the Kazakhs’ resentment of China’s mistreatment of ethnic Kazakhs and Muslim Uyghurs on Chinese soil. Another is Chinese companies’ attempts to dominate economic activity in the region. Still another is angst about Chinese plans to acquire or rent vast tracts of Central Asian farmland.

Kazakhstan
Kazakhstan has been the focus of most of the UAE’s Central Asian investment. As a key example, the Dubai-based ports operator DP World recently obtained a 49 percent stake in the Special Economic Zone in the Caspian Sea port of Aktau and 51 percent of the Special Economic Zone in the transshipment city of Khorgos, on the Chinese-Kazakhstan border.

DP World is already providing management services to the Port of Aktau, Kazakhstan’s main cargo and bulk terminal on the Caspian, and to Khorgos’ Inland Container Terminal. Its stakes in the two Special Economic Zones indicate that it plans to increase the amount of cargo going by rail and truck between Khorgos and the Caspian and on to Europe.

Meanwhile, the UAE's sovereign wealth fund Mubadala will build a gas-based chemical complex in another Kazakhstan port, Atyrau. The plan fits a UAE strategy of increasing the share of non-exploration and non-production projects in its energy portfolio.

Atyrau, Kazakhstan’s main industrial city, obtains oil and gas by pipeline from its inland Tengiz field and its offshore Kashagan field. The multibillion-dollar chemical-complex project will include construction of polyethene and polypropylene plants in Atyrau.

Mubadala already owns a coal operation in Kazakhstan as well, and the financing for the project came from the $500 million Al Falah Growth Fund, a joint initiative of the International Petroleum Investment and Kazakhstani companies.

Turkmenistan
The UAE has also invested in Turkmenistan's highly protected energy sector, where foreign companies are usually not welcome. Dubai-based Dragon Oil has been working in the country for 15 years. Besides being one of Turkmenistan’s largest international investors, Dragon is the only foreign producer that exports its oil to global markets.

Another example of the Gulf’s growing interest in Turkmenistan's energy sector is its support for the Turkmenistan-Afghanistan-Pakistan-India (TAPI) pipeline, the Turkmenistan stretch of which was finished last year. Although Saudi Arabia is financing part of the pipeline’s construction, TAPI’s operating company is based in the UAE.

Uzbekistan
Mubadala has also signed $10 billion worth of investment agreements in Uzbekistan as well, covering the energy, manufacturing, agriculture, infrastructure, and development sectors. In addition, Mubadala plans to start its own power company to invest in electricity generation in Uzbekistan, as the country’s current five-year development plan has opened the door by liberalizing the power sector.

Expansion and rivalry
Central Asia’s strategic location, vast resources, and predominantly Muslim population mean that Gulf states are likely to continue expanding their influence in the region, while Central Asian countries will benefit from reducing their dependence on Russia and China. This is fine with the United States and EU, which would like to see Central Asia more independent and more integrated into global markets.

But a larger Gulf state presence in the region also means rivalry with Russia and China. Saudi Arabia has established a unique collaboration with Moscow to stabilize global oil prices while at the same time competing with Russia for the lucrative Chinese market. The Gulf states will likely need to continue walking a tightrope to maintain good relations with Central Asia’s two big neighbors as they expand their presence in the region.