The UAE paves way for Syria’s return to the Arab fold, but plenty of hurdles remain 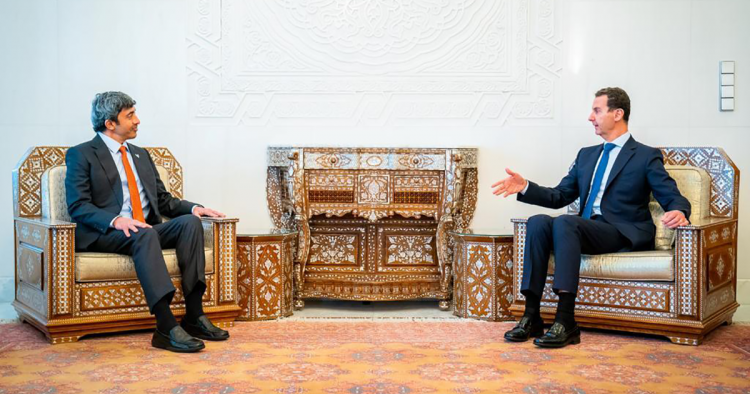 The UAE has made bold strides to normalize relations with embattled Syrian President Bashar al-Assad, opening itself up to criticism as many countries remain reluctant to reconcile with Damascus.

Despite this measured reintegration of Assad into the Arab fold, many serious complications and challenges lie ahead. The most important of these is the lack of support from a hesitant Saudi Arabia, which would impede the crucial next step of Syria’s restoration to full membership in the Arab League before its upcoming summit. Scheduled to be held in Algeria in March, the summit, which was already postponed, may be pushed back further due to COVID-19, although an alternative date has not yet been chosen.

The UAE has been at the forefront of normalization efforts, primarily to act as a potential counter-balance to Iran in the country. Abu Dhabi’s involvement seems like a play for the future, because in the present Iran and Russia strongly dominate the Syrian arena.

The recent trend of Damascus’s improving relations with its Arab neighbors has accelerated with several major diplomatic shifts, including Bahrain appointing its first ambassador to Syria in over a decade and Jordan fully reopening its central border crossing with the country to boost trade.

Nevertheless, with the murkiness surrounding Syria’s official role in the Arab world and the lack of any tangible political shift in Saudi Arabia’s Syria policy, the next potential steps in Arab normalization with Assad are crucial but complicated.

Moreover, incidents such as the recent Houthi attacks on Abu Dhabi also put Damascus in a tight spot with its new regional ally, where its resounding lack of condemnation has exposed the limits of its diplomatic positioning between Iran and the UAE.

There has been a clear roadmap for Assad’s reincorporation into mainstream Arab politics, yet the culmination of that — Syria’s restoration into the Arab League — is not a foregone conclusion.

Although efforts to strengthen Syrian-Arab relations are already being planned, with Damascus scheduled to host an Arab energy conference in 2024, Syria’s full reintegration still requires significant work at the regional level.

Luna al-Shebel, a Syrian presidential media adviser, stated in a rare interview in early January that “in fact, Syria is still a member at the Arab League,” referring to how it was only suspended, and not expelled. She added that “Damascus will return to the Arab League when they [the Arab League] reconsider the mistake that has happened.”

A report by the UAE-based newspaper The National suggested that Arab foreign ministers were assessing Syria’s return to the Arab fold, with one unnamed foreign minister stating, "The decision to suspend Syria's membership [in 2011] was hasty and contributed to the complexity of the situation in Syria."

Syria’s full readmission into the Arab League will be difficult without the support of Saudi Arabia, which has oscillated between hostility and warmth toward Damascus. For instance, the Saudi representative to the United Nations, Abdullah al-Mouallimi, was scathing in his reference to Syria at the U.N at the end of 2021, beginning his speech to the international body by saying, “Don’t believe it if they say that the war is over in Syria.” He discussed the killing of 2,000 people last year in Syria, before adding that countries should not prioritize reconstruction. Rather, al-Mouallimi declared, the goal should be to “reconstruct hearts,” before retorting, in response to Damascus’s claims of having won the war, “What victory did they achieve if their leader stands on a pyramid of corpses?”

Although this illustrates the current Saudi displeasure with the situation in Syria, when it comes to intelligence matters, there has been a clear improvement in relations. Assad’s chief of General Intelligence, Hussam Louqa, attended the Arab Intelligence Forum in Cairo in November, and was pictured seated next to his Saudi counterpart, Khalid al-Humaidan, with both men smoking cigarettes and appearing cordial. Months earlier, in May 2021, Humaidan reportedly visited Damascus, the first meeting of its kind since 2011.

Meanwhile, Syrian Minister of Tourism Rami Radwan Martini travelled to Saudi Arabia in May 2021 for a conference on tourism in the Middle East hosted in Riyadh. It was the first public visit of any Syrian official to the kingdom in over a decade.

The lack of a clear strategy toward Syria from Riyadh — which is facing its own dilemmas in the Middle East — casts doubt on whether Syrian-Saudi relations are strong enough to force through Damascus’s return to the Arab League.

A flurry of activity and measures led by the UAE has propelled Damascus back onto the regional scene. Not only has Abu Dhabi become “Syria’s most prominent global trade partner,” according to the UAE’s economy minister, Abdulla al-Marri — with non-oil trade estimated at $272 million for the first half of 2021 — but it is also aligning itself politically with the Syrian president.

The visit of UAE Foreign Minister Abdullah bin Zayed al-Nahyan to Damascus in November was a gamechanger in relations, with the UAE’s efforts praised by Syrian Foreign Minister Faisal Mekdad as “a courageous step and an advanced one.” Mekdad added, “We are looking to these visits with optimism and we are looking forward to these kinds of initiatives increasing in the coming days and weeks.”

The visit, however, incurred the wrath of Washington, with U.S. State Department Spokesman Ned Price affirming, “We will not normalize or upgrade our diplomatic relations with the Assad regime, nor do we support other countries normalizing.”

Josep Borrell, the European Union’s high representative for foreign affairs and security policy, categorically stated the EU’s position in January 2022: “The united EU position on Syria is no normalization, no lifting of sanctions, no reconstruction until a political transition as set out in UNSC Resolution 2254 is firmly underway.”

This remains the fundamental problem for Damascus: With other countries unwilling to normalize, how much can reasonably be done to make them change their minds, unless countries like Saudi Arabia become more involved in facilitating rapprochement?

The UAE lends a helping hand

The UAE’s economic assistance to Syria has ramped up as well, culminating in a deal for UAE based-firms to build a 300-megawatt solar power plant near Damascus in mid-November. The UAE also relaxed visa restrictions for Syrians in September, allowing visas for males of all ages for a period of three months, including health insurance.

The looming threat of U.S. Caesar Act sanctions has done little to ward off Abu Dhabi. In 2020, then-U.S. Special Representative for Syria James Jeffrey said that the U.S. would not exclude the UAE from punitive measures should it violate the terms of the sanctions, stating, “Anyone who engages in economic activities, whether in the UAE or in other countries, may be targeted by these sanctions.”

Although action has been limited to infrequent warnings in Washington, it remains to be seen whether the UAE's humanitarian efforts in Syria will run afoul of U.S sanctions at some point in the future. Abu Dhabi has provided a valuable lifeline during the COVID-19 pandemic, which has hit Syria’s battered health infrastructure hard. The UAE has sent four shipments of medical equipment and vaccines to Syria as Damascus has been struggling to come to grips with the pandemic.

Moreover, COVID-19 provided the perfect cover for Abu Dhabi’s slow political maneuvering toward Damascus, with Crown Prince Mohammed bin Zayed al-Nahyan stating on Twitter earlier in the pandemic, "I discussed with Syrian President Bashar al-Assad updates on Covid-19 and I assured him of the support of the UAE,” adding, ”Humanitarian solidarity during trying times supersedes all matters, and Syria and her people will not stand alone."

Despite its new relations — seemingly aimed at curtailing Iran’s long-term influence in Syria — Damascus has still found itself restricted in terms of balancing its few allies against each other.

The recent Houthi drone and missile attacks on Abu Dhabi drew condemnation from most countries, but Syria remained tight-lipped. In fact, in October 2021, the Houthi military attaché to Syria, Col. Sharaf al-Mawri, was pictured with Syria’s military intelligence chief in a meeting to address the latest field and military developments in Yemen. Such ties complicate Syria’s new relations with a key ally.

The next stages of normalization with the Arab world depend on a return to the Arab League and a marked improvement in the fragile relations with Saudi Arabia. Unless these two crucial developments take place, the UAE alone will not be able to bring Syria fully back into the Arab fold.

The potential intervention of Saudi Arabia, with its emphasis on Arab ties, could be the boost that Assad is looking for, at least economically. It won’t, however, come cheap in terms of policy, potentially pressuring Damascus to distance itself from Tehran, and as Saudi strategy toward Syria makes clear, it won’t come easily either.

Danny Makki is an analyst covering the internal dynamics of the conflict in Syria and a non-resident scholar with MEI's Syria Program. He specializes in Syria’s relations with Russia and Iran. The views expressed in this piece are his own.