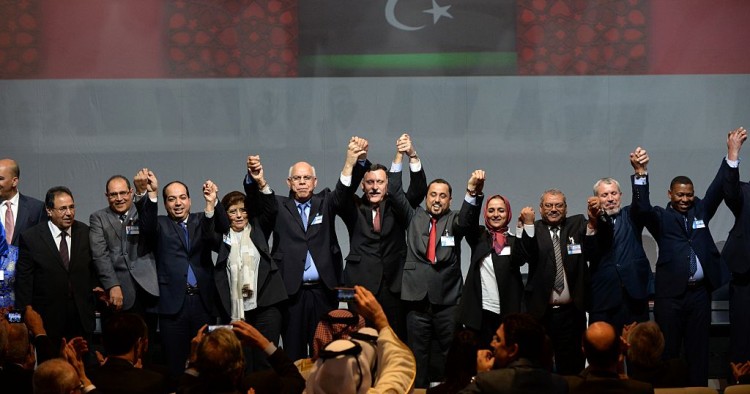 For many decades now, the United Nations has had a whole host of critics on the global right. Over the last few years, the rise of populist, anti-globalization political movements in many major world powers — such as the UK, the U.S., Italy, Brazil, India, and elsewhere — has led to a concomitant shrinking of the UN’s resources, manpower for peacekeeping missions, scope of action, and ability to formulate binding international law. As a result, these days, there are few global conflicts where the UN (and not NATO, the African Union, the GCC, the EU, or more frequently ad hoc coalitions of states) is still the primary mediator, peacekeeper, or forum for political negotiations.

Libya is an exception

Since the ouster of Libyan strongman Moammar Gadhafi in 2011, the UN has nonetheless remained the primary forum for action (or lack thereof) on filling the post-Gadhafi vacuum via state-building, humanitarian assistance, and political reconciliation. The UN Support Mission in Libya (UNSMIL) remains, from a legal and a practical perspective, the key body through which Western powers and the international community work together to try to mediate the conflict and offer carrots and sticks to bring together the various factions currently contesting the civil war.

We are currently in the only week of the year where the role of the UN in crafting novel multilateral approaches to global challenges takes centre stage. Yesterday, Libyan Prime Minister Fayez Serraj addressed the General Assembly, and yesterday and today, special sessions on Libya have been held at the foreign ministerial level for all permanent Security Council members plus the major regional players involved in the conflict — namely the UAE, Egypt, Turkey, and Italy.

To some extent the UN is just a talking shop, but on Libya, it is worth noting that the UN is likely to remain the primary forum for generating legally-binding international decisions pertaining to the crisis.

This is in sharp contrast to the state of affairs in the world’s other major civil wars in Syria, Yemen, and Ukraine, where UN discussion do not usually generate sufficient unanimity to become international law. As a result, Western countries (other than France and Italy) primarily conduct their foreign policy toward Libya by supporting UNSMIL’s actions and the UN’s legal architecture toward the conflict as established in various sanctions policies, UN Security Council resolutions, and treaties.

As explained, the UN’s pronouncements on Libya simply count for more than the body’s resolutions on Syria or Yemen — in those conflicts the UN is not the body “recognizing” which governments or institutions are legitimate and then all the world’s major powers claim to follow suit. But that is actually how things work vis-à-vis Libya. All countries pay lip service to the UN position and claim to uphold and recognize it as “international law.”

Nonetheless, the UN has not been unbiased in its approach to Libya. And the crux of today’s Libya problem in international foreign policy lies in an underappreciated UN misstep in the most important international treaty concerning Libya, the 2015 Skhirat Agreement.

In point 31 of the LPA’s “Preamble,” the Agreement requires all of its signatories (elected Libyan politicians from the House of Representatives and the General National Congress) to recognize the “importance of the continued independence” of Libya’s “economic and oversight sovereign institutions.” Annex 5 clarifies which institutions are intended by enshrining the economic institutions as fundamental and immutable aspects of international law pertaining to Libya. It does so in a way which subtly seems to be postulating a new Libyan social contract, whereby the institutions have signed a compact asserting their co-equality, rather than the mass of the Libyan people establishing their co-equality via a constitutional referendum.

Annex 5 reads, “Libya's sovereign institutions play an essential role in upholding the long-term interests of the Libyan people. The Government of National Accord will safeguard the Central Bank of Libya, Libyan Investment Authority, National Oil Corporation, Libyan Post Telecommunications and Information Technology Company, and other independent institutions, and will ensure that these institutions are permitted to fulfil their recognised role of safeguarding Libya's resources for the benefit of all Libyans.” Their recognized roles are not further spelled out in the document; therefore, the LPA appears to simply enshrine Gadhafian legal precedents about the various institutions of the Libyan economy as permanent and immutable for both the international community and Libya.

The ensuing inability of the government to coerce, control, summarily replace, or reconfigure the power relationships of the institutions is made crystal clear elsewhere in Annex 5, where it is postulated that the Government of National Accord (and hence the Libyan prime minister and the Presidential Council) are at best co-equal with other bodies, and may possibly in some ways be subordinate to them and legally required to follow their guidance:

“The Government of National Accord will pursue policies aimed at maintaining macroeconomic stability and fiscal sustainability. It will be guided by the following principles of fiscal policy and management of national assets in its internal working and in its dealings with other sovereign institutions including the Central Bank of Libya, the Ministry of Finance, the Ministry of Planning, the National Oil Corporation, the Libyan Investment Authority and the Libyan Audit Bureau, among others.”

Even a cursory study of the language of the LPA as conducted above demonstrates that the authors and translators intentionally vested sovereignty in the heads of independent and semi-independent sub-state institutions like: the Audit Bureau, Central Bank of Libya (CBL), National Oil Corporation (NOC), and even more surprisingly in the chairman of one of the utility monopolies, the Libyan Post, Telecommunication, and IT Holding Company (LPTIC). It is critical to note that none of the heads of the economic institutions were signatories of the Skhirat Agreement, nor were any of the signatories acting on their behalf. However, given the broad powers it grants them, it should come as no surprise that none of the heads of these institutions are vocal opponents of the LPA. These institutions lacked genuine independence under Gadhafi, but in the post-Gadhafi period they have used the vacuum of political authority to develop greater independence, becoming something akin to semi-sovereign institutions. But never in their wildest dreams would the heads of institutions like the Audit Bureau or LPTIC have claimed outright “sovereignty.”

Why did this happen? Many conspiracy theories exist pertaining to the LPA. There is reason to believe that the UN special envoy was initially biased toward the UAE and then reversed course just before the document was signed. Yet, it has been the UAE which primarily undermines the coherence and sovereignty of the CBL, NOC, and other Libyan economic institutions. The UAE most certainly cannot be blamed for the UN’s language in the Skhirat Agreement on this point. It is the Western countries that evidently shaped the UN’s perverse use of language here.

If aliens came down and read the Skhirat Agreement and were asked which Libyan factions or side it favored, they would conclude that UN negotiators were acting in cahoots with the heads of the Libyan economic institutions. Did the CBL, NOC, and LPTIC lobby the UNSMIL treaty drafters? There is no indication to suggest that and it is highly unlikely.

Although not stated, the rationale of the UN functionaries for this choice of language is fairly obvious to anyone with experience in the politics of Libyan business. International officials faced tremendous political pressure from member states to guarantee that UN diplomacy would ensure that Western businesses and government institutions would preserve a universally recognized head for each economic institution. This status quo preference for preserving “someone we can talk to” and “do business with” has been a common thread in Western diplomacy toward post-Gadhafi Libya.

Less cynically, some of the drafters of the LPA’s text appear to have believed that they could protect Libya’s wealth from disappearing into the power vacuum, if only they enshrined the heads of the economic institutions as “sovereigns” beyond political control with the sole prerogative to safeguard Libya’s wealth. This logic was naïve, as although “formal” power has rested with the semi-sovereign economic institutions, armed groups in control of the areas of Tripoli in which the economic institutions are based were always able to “informally” assure that decisions were not taken that harmed their interests. In fact, it was only in the wake of the Skhirat Agreement that the cartel of Tripoli militias came into being. That Tripoli is their epicentre is no coincidence. This is why General Khalifa Hifter and his opponents are fighting over Tripoli at present. It is only via control of Tripoli that pressure can be exerted over the heads of the most important economic institutions.

As foreign ministers and their retinues are currently discussing the Libya question in New York and will do so again at a proposed German conference envisioned for October or November, they are faced with an ideal opportunity to correct the insidious implications of this previous UN misstep. The Skhirat Agreement remains the be-all and end-all of international policy toward Libya. Each new UN three-step plan and each new peace conference is conceived as deriving its legitimacy from the Skhirat Agreement.

It is finally time we moved onto something new. Skhirat has failed on multiple accounts. Today’s discussions on the margins of the UN General Assembly and the follow-on diplomacy they lead to are finally an opportunity to create new legal precedents that invoke the legitimacy of the world’s premier international institution in trying to help Libya reform its economy, rather than in simply entrenching its existing dysfunctional institutions.

Jason Pack is Non-Resident Fellow at the Middle East Institute, Author of It's the Economy Stupid: How Libya's Civil War Is Rooted in Its Economic Structures, Former Executive Director of the U.S. Libya-Business Association, and Founder of Libya-Analysis LLC. The views expressed in this piece are his own.