The United States Should Prevent an Egyptian Shift to Russia 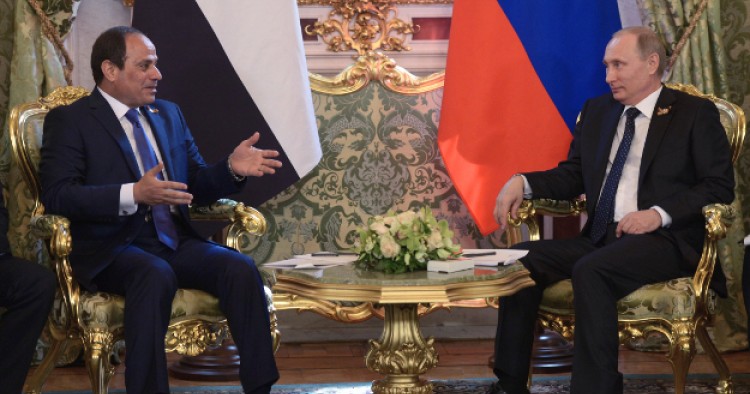 Roughly five decades since the Soviet foray into the Middle East vis-à-vis the Czech arms deal with Egypt in September 1955, Russia is reasserting its influence in Egypt. The deal marked the beginning of a brief period that saw Moscow serve as the primary military supplier for a number of regional countries that formed an ‘anti-imperialist front’, such as Egypt, Iraq, and Syria. Recent developments in Russo-Egyptian relations are reminiscent of Moscow’s dealings with Cairo during the mid-1950s, with the Russians hopeful of a similar outcome. While these developments do not present an immediate threat to the United States, Washington should not dismiss this ongoing strategic leveraging.

While the U.S. alliance with Egypt has largely been steady since the 1979 Camp David Accords, friction in recent years over the ouster of former President Mohammed Morsi and the increasing authoritarian style of President Abdel Fattah al-Sisi has strained this important relationship. Since 1987, the United States has supplied Egypt with $1.3 billion per year in military aid through Foreign Military Financing (FMF). The removal of Morsi, and a subsequent 18-month suspension of some military equipment, ultimately culminated in a decision to reform FMF to Egypt. Starting in 2018, FMF will be channeled through four categories—counterterrorism, border security, Sinai security and maritime security—and cash-flow financing (CFF), a perquisite that allowed Egypt to sign contracts for military equipment on credit, will come to an end.

The stresses in the U.S.-Egypt alliance have not gone unnoticed by Russia. Since assuming power in June 2014, Sisi has improved ties with Russia, making three trips to Moscow compared to none so far to Washington. Trade has been a key area of increased cooperation. During his visit to Egypt in February 2015, Russian President Vladimir Putin hailed “dynamic” bilateral relations, noting an 86 percent increase in trade in 2014. That month, Egypt agreed to establish a free trade zone with Russia’s Eurasian Economic Union. Recently, Cairo said it aims to replace Turkish goods restricted for import to Russia with Egyptian goods. Some analysts say that Egypt’s offer is not feasible, however, it nonetheless demonstrates Sisi’s intent to capitalize on opportunities to expand trade with Moscow. Energy has also been a sector of cooperation. Last month, Russia and Egypt signed an agreement to build Egypt’s first nuclear power plant, which Russian representatives called “a truly new chapter in the history of bilateral relations.”

Robust ties with Egypt offer Russia important strategic advantages, not least of which is enhanced regional influence as the Kremlin enmeshes itself in the Syrian civil war and the global Sunni-Shia rivalry. Ties with Egypt have bolstered Russia’s ability to act as a counterweight to U.S. interests in the region. Alignment on counterterrorism and mutually beneficial trade relations—Egypt serves as market for Russian goods amidst western sanctions and Russia as a source of much-needed investment for Egypt’s economy—provide a strong foundation for Russia’s strategic maneuvering.

It remains unclear whether Sisi’s cozying up to Russia reflects a genuine policy shift or a strategic signal of defiance meant to push Washington to increase support for Cairo out of concern that it will move into Russia’s orbit. But the Egyptian outreach to Moscow should not be understated given the current realignment of regional power structures. Discord with the United States comes not only as Russia seeks to expand its foothold in the Middle East, but as Sisi attempts to establish a foreign policy independent of Washington. The Egyptian president appears to be working toward that end, having already garnered substantial international support, both material and rhetorical, from European and Gulf powers. Egyptian-Israeli relations are and have been strong for decades, casting doubt on the need for an American mediator. And Russia is willing to provide military hardware to Cairo absent any democracy conditions, while the United States has demonstrated willingness to suspend weapons deliveries over human rights concerns dismissed by Egypt.

In the face of a possible Egyptian rebalancing towards Russia, the United States has three basic policy options. On one extreme, the United States could interpret Egypt’s warming to Russia as provocation by an entitled ally whose repressive behavior, which is contributing to the exacerbation of radical elements, flies in the face of U.S. democratic values. Under this option, the United States would impose strict democratization conditions on aid. However, the United States can ill-afford to threaten its relationship with Egypt in this way at a time of Russian resurgence. Furthermore, such a policy risks unravelling the foundations of Egyptian-Israeli peace.

On the other extreme, the United States could provide Egypt with unconditional military aid in an attempt to counter Russian influence. As this policy would overlook any repressive domestic behavior, it could embolden a regime unlikely to reform. Those troubled by this course of action must recognize that Egypt will have to go somewhere for military aid, and Moscow is Cairo’s most attractive alternative. Egypt would certainly be less likely to pursue democratic reform under Russian stewardship. However, while a policy of unconditional support for Egypt may make sense on purely strategic grounds, it would face fierce opposition from those concerned about the regime’s repression.

Several experts have advocated of late for middle of the road approaches that would maintain a strategic relationship with Egypt, but also avoid “coddling” a repressive regime. This third course of action recognizes the threats Cairo faces, notably ISIS, but also seeks to maintain strategic distance from Egypt’s authoritarian measures. The qualitative nature of security assistance could be changed from external defense-type capabilities to equipment and training more appropriate for counterterrorism missions. This would enhance the capability of the Egyptian armed forces to fight ISIS in the Sinai, Libya, and possibly elsewhere in the region. The decision to reform FMF to Egypt starting in 2018 is a positive step in this direction. Recent congressional authorities should also serve as a model for assistance. For example, section 1206 of the National Defense Authorization Act, which provides the authority for training and equipping foreign security forces for counterterrorism operations, focuses on equipment for internal security rather than external defense.

A centered approach recognizes that currently, the gravest threat to U.S. and Egyptian shared interests is not the lack of democratic progress, but the onslaught of groups like ISIS. The United States can employ such an approach as it eyes Egyptian and Russian rapprochement. For the time being, Sisi’s outreach to the Kremlin seems to be posturing. However, a balanced approach would allow the United States to maintain a strategic position of power should a hypothesized shift to Moscow materialize.