The unlikely marriage between Damascus and Tehran 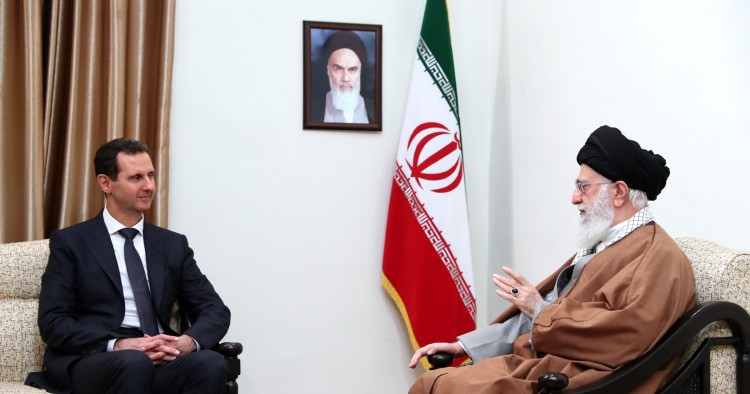 When asked to describe Syria’s close association with Iran, a senior Syrian minister wryly offered the following explanation to a mutual friend: “You don't have to love the woman you’re sleeping with.”

That the relationship between the Ba’ath regime in Syria and the ayatollahs of the Islamic Republic is one of loveless realpolitik is no secret to anyone with a passing familiarity with the history of Damascus-Tehran ties. Their strategic partnership may have been reaffirmed during the recent lightning visit of the Syrian president to Iran, but the end of the war in Syria — and with it the passing of any existential threats to the Syrian regime — has already begun to expose faults in the unlikely marriage between a militant secular Arab regime rooted in the independence politics of the colonial era and the revolutionary rule of the wilayat al-faqih.

Mutual if bloodless self-interest is at the heart of the relationship between Damascus and Iran, but Washington’s antipathy toward both regimes has strengthened, rather than frayed, their wartime alliance, setting the stage for the consolidation of a postwar Tehran-Damascus economic axis running through Baghdad. Those who oppose Iran’s overweening presence in Syria would do well to fortify Syria to restore the affair between Damascus and Tehran to its proper proportion. Instead, Washington has continued to push the ambivalent Syrian regime into the ayatollah’s ready embrace by undermining and retarding efforts to restore Syria’s equilibrium.

To be fair, the Assads, both father and son, have never seen much value, or reward, in encouraging Washington to pursue a different path. A stiff formality marked U.S.-Syrian relations, even during the many years when senior U.S. officials were regular visitors to Damascus.

Bashar al-Assad’s February visit to Tehran tempered hopes throughout the Gulf that he would quickly unwind relations with Iran after his victory.

“Syria’s victory,” declared President Hassan Rouhani during Assad’s short visit, “is a victory for Iran and the entire Islamic nation.” Assad, lionized by Iran’s supreme leader, Ayatollah Ali Khamenei, as “the hero of the Arab world,” returned the favor, assuring his hosts that relations between Tehran and Damascus were a “key factor in Syria’s and Iran’s resilience in the face of the plots of the hostile states, seeking to weaken both countries.”

The Trump administration’s policy of “maximum pressure” on Iran is accompanied by a reaffirmation of Washington’s — and, as a consequence, the international financial/donor community’s — boycott of Syria’s postwar reconstruction. Although this tactic serves Washington’s bipartisan interest in continuing to punish the regime for its victory, it comes at the high price of undermining its strategic objective of reducing Iran’s footprint in Syria.

Iran, subject to American and international sanctions, is increasingly desperate to establish economic opportunities not subject to such constraints. So too is Syria. Their shared predicament as objects of the American campaign against their “malign influence” has given them a compelling reason to pursue postwar economic cooperation. A wide range of mutual visits by all manner of economic delegations attest to this shared interest.

Syrian state news agency SANA reported that a recent visit to Iran by 24 Syrian businessmen working in the metal, food, plastics, cars, spare parts, tires, and construction industries “touched upon finding new mechanisms to remove obstacles facing investors on both sides, and informing Syrian investors about the capabilities and resources of Iranian companies.”

Such postwar economic cooperation, driven in part by the West’s sanctions, may well prove more effective than the military alliance in advancing Iranian interests. In January, Syria and Iran signed 11 agreements and memoranda of understanding, including the outlines of a deal on “long-term strategic economic cooperation.”

Iran’s rehabilitation of the port of Latakia was one of the agreements initialed. The opposition ANA press service has reported that talks began last month to transfer the container port in Latakia, 150 miles north of Damascus, to Iranian administration later this year.

Additionally, the completion of a railway link between Khorramshahr and Basra complements an Iranian presence in Latakia — establishing a maritime link between Iran and Syria in addition to a land bridge across Iraq. Latakia itself may soon be developed into an energy hub for Iranian gas exports as part of a broader trade integration with China’s ambitious maritime Silk Road.

“Iran needs an important and necessary outlet to the Mediterranean to access Europe, which opposes the American sanctions and is still maintaining the nuclear deal with Iran,” a member of the Syrian opposition explained. “If Iran succeeds in dominating the Latakia port, it will have made a major achievement in accessing the world through the sea.”

Syrians increasingly chafe at Iran’s outsized role in Syria. Rather than exploiting this opportunity though, the Trump administration continues to lead the campaign to deny Syria the ability to reestablish sovereignty throughout the country. U.S. efforts instead focus on consolidating the Syrian Democratic Forces’ rule in northeast Syria. Plans to train and equip a force of 40,000, initially mooted in December 2018, appear to be moving forward, albeit with a somewhat reduced complement of U.S. forces.

To the extent that the regime is blocked from regaining control over the rest of the country, it strengthens the rationale for Syria to look to Iran and Russia for assistance — the very opposite of what Washington intends.

For the Trump administration, Syria may well be viewed as collateral damage to secure the larger prize of exhausting Iran. Indeed, to the extent that there is a purpose to Washington’s effort to consolidate postwar ties between Tehran and Damascus, it may be to compel the Iranian regime to expend precious resources on its Syrian adventure.

A more nuanced policy would see Washington adopt the objective increasingly embraced by Syria’s Arab neighbors. Countries like the UAE, Jordan, Bahrain, and Egypt do “not expect Bashar to break relations with Iran, but they want[ed] Bashar to use the Iranians rather than be used by them,” a Gulf official recently told Middle East Eye. “The message was: ‘Return back to how your father treated the Iranians, at least as an equal at the table, rather than subservient to Iranian interests.’”

Schooled in the brutal politics of post-Mandate Syria, Hafez al-Assad was a tireless guardian of Syria’s hard-won independence and the “independence of Arab decision-making.” As such, he tamed efforts by both internal and external challengers to establish undue influence over Syria’s policies. This determination was reflected in his relationship with Iran, which was kept at arm’s length by the regime.

His son, Bashar, has succeeded in defeating an array of foreign and domestic opponents to retain his hold on power, but in doing so he has squandered his father’s legacy. Washington, for its part, would do well to reconsider its determination to deny Syria the ability to restore its sovereign authority throughout the country and to hinder the ability of its long-suffering people to rebuild their country and economy. A strong and united Syria is the best antidote to Tehran’s outsized aspirations.