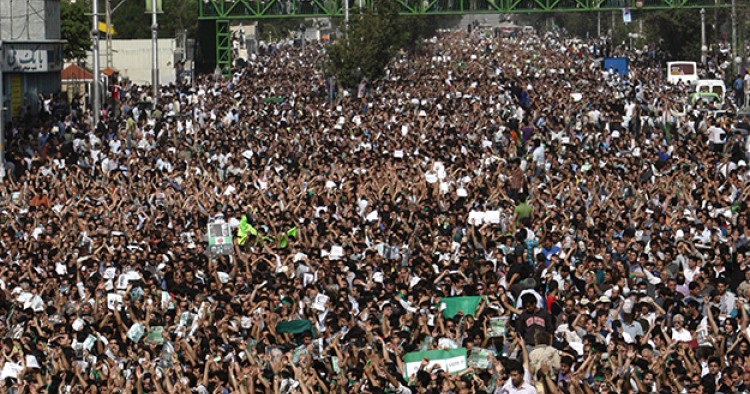 The MENA and Southeast Asia regions have undergone and continue to undergo massive political transitions. Differences in the process and outcomes of their transitions can be viewed through the lens of a “civil society infrastructure” and the qualitative differences in both these regions. This essay series engages a variety of issues regarding the roles and impact of civil society organizations (CSOs) in these two regions during the transition and pre-transition periods as well as in instances where the political transition is completed. Read more ...

Since the end of Mahmoud Ahmadinejad’s government in June 2013 and the election of the moderate Hassan Rouhani, Iran’s diplomatic activity has changed, specifically its engagement in nuclear talks. The possibility of an agreement[1] reignited enthusiasm for and attention to Iran’s civil society, which played an important role in supporting a diplomatic solution to the nuclear dispute. While many lauded Minister of Foreign Affairs Javad Zarif as the champion of the diplomatic breakthrough, others interpreted the progress in the negotiations to be the result of effective collective efforts by pro-democracy activists.[2]

This renewed attention to Iran’s civil society echoes old debates about the place and role of civil society in authoritarian settings. Does civil society activism lead to democracy? Or is civil society an instrument of regime strengthening due to the legitimacy that it can provide to authoritarian regimes at the international level, as well as its function in discouraging more radical activism? Although these questions remain relevant, the focus on democratization or its absence may lead scholars and observers to ignore more pressing questions about political and social activism taking shape and how it transforms state-society relations.

Although Iran has not undergone massive change or political transition since 1979, it has experienced recurrent though less disruptive change since the end of the war with Iraq in 1988. As a consequence, civil society activists have had to continuously adjust their approaches and activities. Given the highly securitized setting in which Iranian civil society activists have had to operate, it seems paradoxical that they have managed not just to survive, but in some ways even to thrive. But as we argue in this essay, repression and civil society activism have coexisted, thanks to coping strategies such as professionalization and “voluntary co-option” that civil society organizations (CSOs) have employed. In a sense, civil society activists in Iran have upgraded their tactics in order to adapt to, and resist, authoritarian constraints. These “survival actions” have enabled them to become indispensable to state institutions in policy-making processes and to negotiate their functions in society, albeit at the price of moderating their demands for change.

During the 1990s, for the first time since the Iranian revolution, non-public actors were officially considered potential partners for the government and other public economic actors, paving the way for successive political reforms in favor of civil society. During the same period, a number of socioeconomic transformations within society took place, with a new post-revolutionary generation taking center stage in domestic politics and demanding reform. These elements brought to power factions of the domestic elite that made pro-democracy reforms their flag. The Khatami government, elected in 1997 and reelected in 2001, linked its name to such reforms. One of the crucial points in its electoral program was the strengthening of an indigenous, Islamic civil society, which, according to the zeitgeist of the time, had the role of deepening democratic reforms in collaboration with the government.

Despite fierce opposition from conservatives, who were afraid of a Central Asian-style “color revolution” taking root in Iran under Khatami’s protection, Iran’s civil society flourished during the reform era. Crucially, NGOs were identified in legislation as legal entities, and including and consulting them in matters of local government was made compulsory.

While civil society was increasingly institutionalized in the form of NGOs,[3] measures of securitization were also put in place. This created a contradiction between the containment of civil society and its functions on the one hand, and its public exposure and full legalization on the other. This contradiction continued during Ahmadinejad’s two successive governments (2005-2013).

Growing securitization of the civil society sector originated with the fear of a “velvet revolution” taking place in Iran. The insistence on regime change and democratization, alongside the “axis of evil” rhetoric of the George W. Bush era, provided the regime with the necessary legitimization to crack down on civil society and NGOs, depicting them as internal enemies plotting to overthrow the Islamic Republic in tandem with the United States.[4]

During the reform era, civil society was repressed under the guise of national security by anti-reform forces, who denounced its positive support by the Khatami government. Needless to say, exceptions to this positive support did exist, such as when the government would characterize an organization as an ideological threat when it showed too much independence.[5]

Securitization continued after the end of the reform era with the election of Mahmoud Ahmadinejad. During this period, the terms “civil society” and “NGO” disappeared from public political discourse. Pressure was exerted on civil society activists to give up their political commitment, while the governance bodies of the non-state, non-governmental sector were taken over by personalities close to the new government or even absorbed by the Ministry of Interior. The activities of NGOs were also restricted by decreased funding and license issuance. The fear of a coup orchestrated from abroad intensified during the so-called Green Movement protests and the popular uprisings in 2009-2010, which were depicted by the government as a civil society plot against the regime. Extreme measures were taken, including expulsions from university, arrests, and imprisonments. Many activists were left with no other option but to seek asylum abroad, with the consequent loss to the country of valuable social capital.

Yet containment of civil society only tells a partial story. Activists explain how during the reform era, many of them experienced and learned how to navigate authoritarian constraints. An activist from Golestan Province, for example, held training sessions to teach lobbying and working-group techniques to ordinary citizens as well as to NGO activists. The sessions focused on how to approach local and municipal council members and how to write letters of complaint to local authorities. According to the activist, the workshops equipped people and NGO activists with the skills needed to keep pressure on politicians and the government—skills particularly necessary in times of heightened constraint.[6]

Professionalization has also played an important role in allowing civil society to survive, particularly because NGOs and other CSOs participate in matters of local government as consultants and can therefore extend their networks in both society and policy-making circles. One activist pointed out that in regard to environmental issues the government cannot eliminate NGOs from the domain of public policy because of the skills and know-how that they possess. Indeed, it is CSOs that often deal with ordinary citizens’ problems, as they have acquired the skills to do so―skills that are often not available to policy-makers. Furthermore, NGOs often provide a workforce for local governments by, for instance, cleaning forests, purging lakes, and other similar operations whose accomplishment would otherwise be more difficult.[7]

CSOs’ ties to society also make them crucial to policy-makers. In fact, CSOs not only enjoy popular support given their connection to ordinary people, but they can also serve political elites by providing a link to the wider public. This trait of CSOs becomes very important during electoral campaigns, and civil society activists in Iran report that they have been “invited” by candidates and incumbents to provide human resources and supporters during campaigns.[8] This has occurred regardless of the faction in power. For example, a notable case is that of the NGO Farzandan-e Paytakht―founded by the daughter of the well-known and respected reformist Abbas Abdi―which mobilized electoral support for the Mosharekat Party, the main reformist political organization in the lead-up to the 2004 parliamentary election.[9] These examples tell us not only about the pervasiveness of the Iranian state, but also that CSOs are regarded as useful resources by the political elite; CSOs’ position vis-à-vis the political elite is thus paradoxically strengthened. In fact, by making their networks available to elites, CSOs may count on the support of incumbents and candidates.

This function of CSOs, namely serving as a potential instrument for the strengthening of the political elite in power though its public presence and network opportunities, is so crucial that politicians themselves have established their own NGOs. Such is the case of Baran, an NGO headed by former President Mohammad Khatami, which launched the candidature of Mir Hussein Moussavi in the 2009 presidential election. Baran serves as a platform through which reformists can network with various organizations and enhance their exposure through conferences and other events.

Apart from building connections with the political elite, another survival strategy is to “migrate” from issues considered too controversial to issues seen as acceptable. For instance, many among the activists who survived the Ahmadinejad era shifted their focus to the environment. In fact, working on environmentalism enabled them to continue their civil engagement while shielding them from government intimidation during a time when social activism of any kind was dangerous.[10] A similar dynamic happened in the fields of humanitarianism, culture, and child protection, although these areas are considered to be more in line with Islamic and conservative activism.

Civil society in Iran is caught between two sides. On one exists a highly securitized state that wants to limit its functions, if not destroy it. On the other is survival, but at the cost of renouncing calls for fundamental political change in exchange for partial protection from harassment. In such a setting, it is not surprising that many Iranian NGOs and CSOs have perished, either because they did not adopt the strategy of “upgrading” or because they were considered too dangerous or radical by the political elite. Such a containment strategy has created an environment that is hostile to civil activism, with NGOs becoming suspicious of each other. It follows that those CSOs that have survived display a strong ability to adapt to ever-changing circumstances by “upgrading” their networking activities or their focus.

Although the current state of Iranian civil society may not tell us a lot about the prospects for democratization, it might contain the potential for change that is not evident at first sight. In fact, lineages of change and revolt may be concealed by an overly narrow focus on political institutions and the infrastructure of formal political participation, such as political parties; such an idea resonates with the most recent literature on activism and political change in the aftermath of the Arab uprisings. In this sense, less structured actors such as CSOs, and NGOs to a degree, might be an incubator of change, despite the fact that the necessity to survive authoritarian constraints has so far made them into service providers and consultants for local governments.

[3] According to official figures collected by the Interior Ministry, registered and active NGOS today number more than 10,000 in Iran.

[5] Paola Rivetti and Francesco Cavatorta, “Iranian Student Activism between Authoritarianism and Democratization: Patterns of Conflict and Cooperation between the Office for the Strengthening of Unity and the Regime,” Democratization 21, 2 (2014): 289-310.

[6] Interview with a member of the “Central Council of Iranian NGOs,” Gorgan City, Iran, June 2014.