The US-EU divide over Iran sanctions 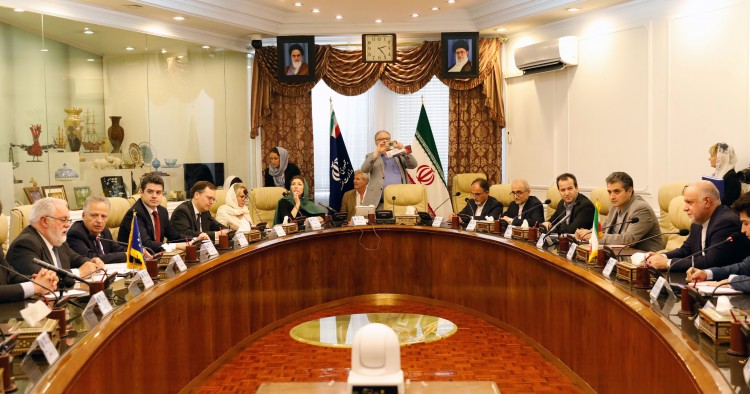 The U.S. administration’s decision to reimpose sanctions on Iran caught the European Union (EU) by surprise, illustrating the growing divide in transatlantic ties under President Donald Trump. The sanctions will reach levels not seen since the July 2015 signing of the Joint Comprehensive Plan of Action (JCPOA), as the Iran nuclear deal is officially known. President Trump’s decision will not have a major impact on American commercial interests as the U.S. economic presence in Iran is quite limited. It will, however, affect America’s allies in Europe, which have benefited significantly from growing trade with Iran since the agreement was signed and do not see eye to eye with Washington on sanctions.

Trade is one of the main points of contention between the U.S. and the EU on this issue. Since the JCPOA was finalized, a large number of European delegations have visited Tehran, and the EU supports Iran’s ambitions to join the World Trade Organization, a move the U.S. opposes. The EU was Iran’s largest trading partner before sanctions, and now it is the third. For the EU’s part, Iran is the bloc’s 30th largest trading partner, and trade has been trending upward: the year after the JCPOA was signed, EU imports from Iran increased by 334.8 percent and exports by 27.8 percent. In 2017 the EU exported goods worth more than $12.14 billion to Iran (mainly machinery, transport equipment, chemicals, and manufactured goods), while imports topped $11.36 billion (of which mineral fuels accounted for 88.7 percent). Ultimately, European companies, which have already invested billions of dollars in Iran, will probably lose most of that and be forced to cancel lucrative deals with their Iranian counterparts. Major European firms like France’s Total and Germany’s Daimler have already announced that they will cease operations in Iran in accordance with U.S. law.

Yet small and mid-sized companies will likely continue doing business in Iran as they have less exposure to U.S. secondary sanctions. On Nov. 6, EU High Representative for Foreign Affairs and Security Policy Federica Mogherini declared, “We are encouraging small and medium-sized enterprises in particular to increase business with and in Iran as part of something that for us is a security priority.” And it seems that it is just the beginning. EU institutions will likely turn a blind eye to European enterprises’ activities in Iran. They may even accept special purpose vehicles (SPV), established by European energy giants in third countries to secure Iranian oil.

The American decision to reimpose sanctions may result in a new wave of tensions between the U.S. and EU. At the next European Council summit in December 2018, some member states will likely try to secure their interests and strengthen the EU’s Blocking Statute, a regulation that “allows EU operators to recover damages arising from US extraterritorial sanctions from the persons causing them and nullifies the effect in the EU of any foreign court rulings based on them.” As a result, Iranian sanctions may become another front in a broader U.S.-EU economic war. The European Commission has already updated the Blocking Statute to mitigate the impact of sanctions on EU companies that want to continue conducting legitimate business in Iran.

EU enterprises that purchase Iranian oil or planned to sign new contracts with Tehran, like the Polish oil company Orlen, will have to find other suppliers. The first ship carrying Iranian oil only reached Poland in April 2017, but after sanctions take effect on Nov. 5, Orlen will probably cancel its short-term contract and halt negotiations on a long-term one. As a consequence, the company will probably have to buy more oil from Nigeria and the U.A.E. to meet current demand. Orlen intended to partly replace heavy sour oil from Russia with oil from the Middle East, including Iran. Now it will be forced to update its long-term strategy.

The U.S. administration is concerned that the EU is taking what it sees as a soft approach toward Iran. Yet it should be underlined that although the EU decided to lift nuclear-related sanctions against Iran after the signing of the JCPOA, it still extends sanctions in response to serious human rights violations. At present these sanctions include a travel ban and an asset freeze against 82 people, as well as a ban on exports of equipment that might be used for internal repression. Moreover, European states have sought reasons to exert pressure on Iran. In Jan. 2018, for instance, Germany considered introducing new sanctions to support the U.S. position and respond to Iran’s missile program as well as its ongoing involvement in conflicts in the Middle East.

While European powers do not support reinstating sanctions, they are keeping a close eye on Tehran’s actions. Regional peace and stability remain a significant interest, especially for key member states like France, Italy, and Germany. If Iran or its proxies take controversial actions in Yemen or against the Gulf states, or if Iran withdraws from the JCPOA, Brussels may be open to the Trump administration’s ideas. For the time being though, all signs suggest the EU would rather focus on cooperation with Iran, especially on the issues of terrorism and the refugee crisis.

While U.S. sanctions may not force Iran to limit its projection of power in the Middle East, it will negatively affect the delicate balance in transatlantic relations. Trump’s decision moves the U.S. closer to Israel and Saudi Arabia, but it will also severely dissuade European allies from supporting Washington’s regional policy. It may also bring the EU closer to the Russian Federation and China.

The EU could support imposing new non-nuclear-related sanctions, but not the U.S. withdrawal from the Iran deal. Europeans are satisfied with the JCPOA as well as Iran’s fulfilment of its terms. Even if European companies stop doing business with Iran, they will do so because of American pressure, not out of a sense of transatlantic solidarity. And going forward, EU leaders will likely think twice before they support any American initiative on an international dispute or conflict.