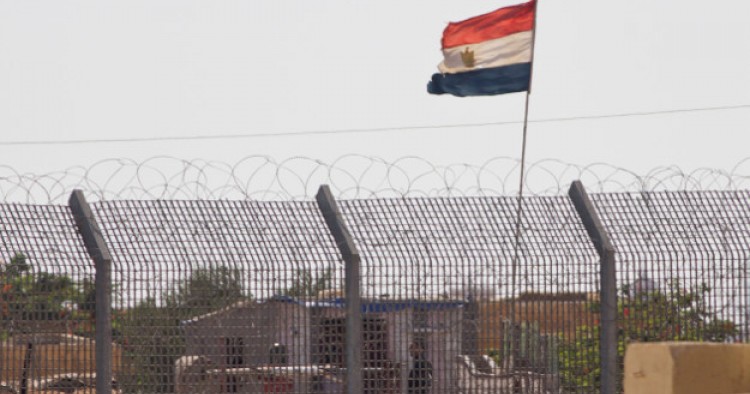 Despite its preferences, the United States is quietly increasing and modifying its military deployment in Egypt's Sinai Peninsula in response to the growing threat posed by ISIS.

In early September, the Pentagon announced that at least 75 soldiers—comprised of a light-infantry platoon and a forward surgical team, as well as support equipment including surveillance devices—will be added to the existing 600-plus U.S. contingent of the Multinational Force and Observers (MFO) serving in the Sinai.

The decision to increase U.S. troop numbers was made in the wake of a September 3 attack on MFO forces in North Sinai by the local branch of ISIS, Wilayat Sinai, which injured two Fijian peacekeepers.

"We're going to continue staying in contact with the MFO and adjust force protection capabilities as conditions warrant," explained a Pentagon spokesman. The addtional troops will bring the total U.S. force level in the Sinai up to about 725 of a total deployment of close to 1,700 from 12 countries.

The September incident highlights the transformed environment in which the MFO now regularly operates, an environment now defined by a hot and growing insurgency led by ISIS.

The current security challenge is prompting a rethink of the MFO’s purpose. Created in 1979, the MFO was originally established as a symbol of international support for the then newly-minted peace treaty between Israel and Egypt. It was a key confidence-building part of the new relationship between two critical U.S. allies.

The MFO is charged with monitoring the adherence of both parties to their deployment and limitation of forces in and around Sinai, which had served as the primary theater of military operations in both the June 1967 and October 1973 wars.

The forces manning the MFO—in the U.S. case civilians, ex-military and units from the National Guard—were never intended to be peacekeepers, but rather an all-but-unarmed peace-observing force. The MFO was built to reflect rather than administer the absence of conflict between Israel and Egypt.

That mission was performed without incident for almost three decades. But for all practical purposes, the MFO today is being dragged into a conflict it wasn’t designed to fight, and is playing catch up as it seeks to adapt to the challenges presented by ISIS.

Sinai is ground zero in the ongoing insurgency against the Egyptian government led by ISIS. The military tools Egypt is deploying to confront the revolt have—with Israel's consent—shredded the limitations outlined in the 1979 treaty and monitored by the MFO. The everyday series of regular inspections and routine observations that comprise the core of the MFO's mission place a premium on transparency and regularity—practices that are dangerously out of place in Sinai today.

Instead of observing and certifying continuing adherence by both signatories to the terms of the treaty, the MFO is increasingly preoccupied with expensive actions aimed primarily at enhancing force protection in an active military arena.

In recent months, these changing circumstances have forced Washington to address issues related to the MFO's mission, protection and staffing.

Beginning last summer, the U.S. quietly initiated internal deliberations aimed at reducing the exposure of MFO forces by closing isolated outposts, reducing the overall number of forces, and changing their composition to reflect the current warlike environment that exists in Sinai, particularly in the environs of the MFO's main North Camp.

Reaching a consensus among the 12 nations that comprise the MFO on desired modifications is a challenge in itself, let alone obtaining consent from Israel and Egypt. According to one Egyptian official quoted by Reuters, at a review meeting held in Rome in late November, "the MFO said they want to reduce the force now, but we and Israel refused."

Reuters revealed that the MFO proposed withdrawing some 400 troops over six to nine months and replacing them with remote surveillance equipment. In Rome, the U.S. faced not only Egyptian but also Israeli opposition to its proposal to downsize the MFO contingent.

Israel is a full partner in Egypt's counter-insurgency campaign in Sinai as it is also in ISIS' crosshairs. On November 10, Wilayat Sinai released a video threatening attacks on Israel: “We will renew the punitive attacks on Um Rashrash [Eilat] soon, very soon. You’ll be sorry for everything you have done to the Muslims ... You’ll be amazed to discover that the [Islamic] nation that you have tried for decades to eliminate has awakened in order to fight you and annihilate you.”

Although Israeli officials have stated the MFO is not a primary target for ISIS, there have been incidents where North Camp, MFO patrols and its airbase at al-Jura have come under fire. The town of Sheikh Zuweid nearby was even briefly overrun by a well-coordinated ISIS assault in July.

The MFO, and in particular the United States, must now confront the unwelcome prospect of a kinetic engagement with ISIS in Sinai. The Obama administration’s original proposal to reduce the MFO force in Sinai suggests it has a key interest in reducing its exposure to ISIS attack, but this is weighed against the insistent demands of Egypt and Israel not to alter the status quo.

While the U.S. undoubtedly does not want to see Wilayat Sinai expand in the region, and potentially into Gaza and other parts of Egypt, it would prefer not to have its forces as ripe pickings on the front line.

The Obama administration, thus, finds its options narrowed by the demands of its allies, increasing rather than reducing the number of boots on the ground, and hoping it will not be drawn into another open front with ISIS.