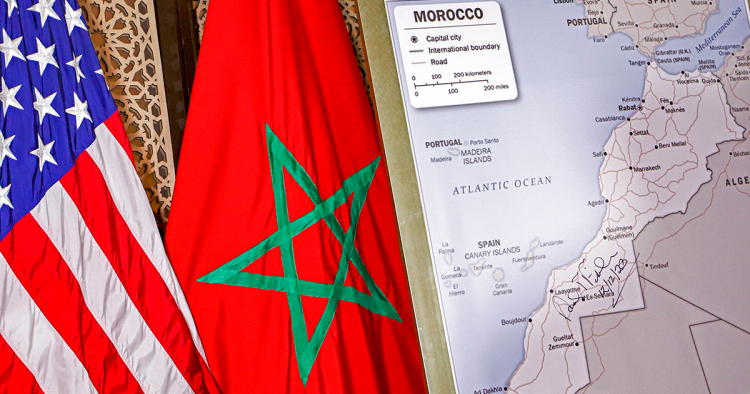 The recent exchange of quid pro quos between the U.S. and Morocco has been handled well by both sides, despite the ritual carping to be expected from opponents of the quid and the quo. It was the proponent of the deal in general who once announced, “Quid pro quo? That’s just what negotiation is about.”

The U.S. got another endorsement of the “Abraham Accords,” made by a state that already has quiet relations with Israel, but in this case carefully phrased as a future intention, to dampen domestic opposition. (The dampening was not particularly effective, but nonetheless.) Morocco got an American endorsement of its claim over the Western — now Moroccan — Sahara, an endorsement that it has hoped for for almost half a century. This element of the exchange has brought little reaction in the U.S. (other than a petulant Foreign Policy commentary from a former White House staffer, John Bolton, who has long been opposed to Morocco’s national policy). So this requires some explanation.

Morocco recovered the Spanish part of the historic kingdom (which by the International Court of Justice in 1952 continued to exist despite colonization) in 1956, along with the French protectorate over the main part of the country, in 1958 and 1969. Spain maintained the southernmost part as the Spanish Sahara until 1975, when dying dictator Francisco Franco handed it over to Morocco and Mauritania, and the U.N. recognized its administrative control. As in French African colonies, members of a territorial council approved the move, but other members opted instead for an independence movement, the Liberation Front for Saguia el-Hamra and Rio de Oro (Polisario Front), the two administrative sectors of the colony.

In the ensuing military conflict, Mauritania gave up its claim (and its government), the Polisario retreated to camps in western Algeria with offices in Algiers, and Morocco completed military control of 85 percent of the territory by constructing a fortified sand wall close to its eastern border. When the conflict stalemated along that sand berm in 1991, the U.N. Security Council instituted a cease-fire with the promise of a referendum. The U.N. Mission in the Western Sahara (MINURSO) was unable to schedule a referendum because of a broad dispute over voter lists, and various proposals have been offered for negotiation, with no agreement.

In 2007, Morocco, on U.S. urging, presented a draft plan for autonomy in the region, the first and only proposal made by either side that was halfway between the two extreme positions of undifferentiated integration into Morocco and independence. Subsequently, the U.N. has declared the position realistic, credible, and serious, and privately or publicly, UN secretaries-general from Boutros Boutros-Ghali onward have favored the autonomy solution.

Although running under Algerian control, the Polisario can be both ingenious and frustrated: 50 years in camps in the desert breeds both impatience and disillusionment, especially among the increasing numbers of youth. In October, the Polisario organized a civilian roadblock at Guerguerat in the southwest corner of the territory, cutting strategic and commercial ties with Mauritania and Senegal beyond. A few weeks later, the Moroccan army moved in to break the roadblock, leading the Sahrawi People’s Liberation Army to declare Morocco had broken the truce, and the war was on again. Nothing much more than shelling along the berm occurred, but one wonders whether the renewed activities were carried out with the knowledge, approval, or instance of the new Algerian government, currently undergoing some serious instability.

Morocco has long made support for its irredenta, along with loyalty to the king, Mohammed VI, one of the two pillars of allegiance to the regime, and analysts generally agree that reversal on the Saharan issue would put the monarchy in danger. The king weathered his version of the Arab Spring in 2011 rather adeptly, bringing out a new constitution that it took time to implement. Morocco has been a solid collaborator on issues important to the U.S. for decades, including the Mideast Peace Process, and it has looked for reciprocal support of equal importance to it. One thing that might bring together support in the U.S. would be a greater insistence on Morocco to clear up its act domestically in the Sahara, where it has sent large amounts on money (mainly Saudi) and carpetbaggers for economic development, but has not been gentle in its treatment of local populations who have real social and political grievances.

Like all futures, the impact of the quid pro quo is not clearly indicated. While the “war” has not exploded, Algeria may be heating up relations with Morocco to gather domestic support, although the issue is of greater appeal to the army than to the Algerian people. It would consummate the shift of the Saharan issue if some of the Friends of Morocco, above all France but also Britain and Italy, and by a long stretch Spain were to join in the recognition. The Biden administration could undo the executive order with its own executive order, adding to post-Trump policy uncertainty, and it may not want to make a fight in Congress over this one. In the end, the issue, having taken a major step toward normalization, may simply settle down again since it holds little importance for anyone but Morocco, Algeria, and the local Sahrawi people.

N.B.: On the background see “Conflict in the Sahara” in I. William Zartman, Ripe for Resolution: Conflict and Intervention in Africa, Oxford University Press, The Council on Foreign Relations, 1989.

Chinese Health Diplomacy and the Maghreb in the COVID-19 Era