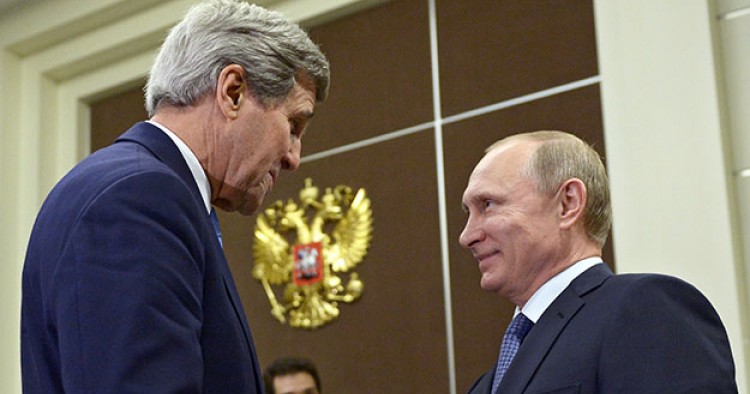 The announcement of a meeting between Vladimir Putin and John Kerry related to Syria, as well as the subsequent visit to Moscow of Daniel Rubinstein of the State Department’s Near East Bureau, may have stunned some pundits on the outside, but for those who have been following the evolution of leadership opinions on Syria in both countries, the surprise is that these official meetings have not come sooner.

On the U.S. side, enthusiasm for any steps that would increase U.S. involvement in or even hint of U.S. “ownership” of the Syria conflict has been and remains decidedly restrained. Despite repeated demarches from the Turks, Saudis, Qataris, and Jordanians for years and calls from some quarters in the United States that the Syria conflict is one of “pay me now or pay me later,” with the cost with each passing year higher and higher, Obama resisted being drawn in.

Though reversing the rapid rise of ISIS became a top U.S. national security priority, Syria took a back seat. The military campaign has been and remains “Iraq first,” with only modest steps to arm Syrian opposition forces and bombing primarily aimed at destroying ISIS’s infrastructure and economic assets.

But in recent months, key military and civilian analysts have stressed that the Syrian regime cannot win, that it can in fact “lose,” and that the winners will almost certainly be a combination of those the United States labels as extremists. U.S. alarm has been fed by the Turkish move to open the spigots to the flow of foreign fighters and resources to support them. The recent Turkish-Saudi partnership appears determined to ensure Bashar al-Assad’s demise with little concern for the day after.

This has prompted fresh looks at what might be done.

On the Russian side, the evolution of opinion has proceeded more rapidly. When a senior Russian analyst came to the United States early this year, he stated pointedly that for Russia, Syria is a peripheral issue, that the rise of extremism there is of no great interest, that Assad would stay until his last breath, if necessary—and that could be many years away, if ever.

Lately, however, in informal talks involving Russians and Americans, there has been increasing recognition that the rise of extremism in Syria, including and especially ISIS, is of direct concern to Russia. There has also been growing concern over the number of Muslim Russians and those from the former Soviet Union countries rushing to join ISIS in Syria. What will happen when they return?

In addition, the Russians have moved well beyond the United States in believing that an extremist victory in Syria is inevitable, and may be already on the horizon. What would that victory look like? Videos of packed vehicles carrying jubilant, gun-waving fighters hoisting extremist banners as they ride into Damascus will be broadcast as “breaking news” on every channel throughout the world. Such an image will send shock waves globally, including and especially inside the Beltway and the Kremlin.

This last factor is key to understanding why the Russians are now prepared to talk officially with the Americans. To be sure, these talks will be contentious. To begin with, Kerry cannot talk to the Russians about anything without at least throwing Ukraine on the table. In this case, he will do his best to slip it under the door, but he cannot avoid it. This could easily sidetrack discussions and muddy the atmosphere.

The two countries will agree privately that an extremist victory is likely, if not inevitable, and will acknowledge that fear is the primary motivation for launching a dialogue between them with the goal of finding a pathway to political resolution of the conflict.

The fact that this meeting is taking place is of great significance. The Syrian government will see it as a great power collusion that cannot in any way be in its interests. All other proxy countries and movements, including and especially Iran, Turkey, and Saudi Arabia, but also Iraq, Jordan, Qatar, Israel, Hezbollah, and the Syrian opposition of all stripes, will all wonder if their equities are being digested by the two great powers and about to be spit out. Where will they stand in any decisions taken by Russia and the United States?

Fear will also motivate each of these players. To date, the proxies and most of the opposition have seen Syria as a playground without any serious international referees—not the UN, and certainly not the great powers. They will view U.S. and Russian talks as a possible game changer that could lead to new actions, ranging from serious negotiations to military intervention, with the results affecting their interests.

Speaking off the record, one analyst forecast that the talks will have such a strong impact in Damascus that they could in time spark a coup against Assad on the basis of regime survival. His comments were based, he said, on reliable inside information, and he predicted that such a change may well lead to strong calls by the new government for political inclusion, words that will be soundly rejected by many in the opposition but will ring well with the UN, the United States, and the Europeans.

Is all of this too little, too late? Many will take this position, and it will be hard to counter this conclusion. So little serious work has been done on acceptable, sustainable political transition that it is hard to conceive that a political settlement is feasible. At the same time, unless Iran, Turkey, and the Gulf states are on board, any of them could be a significant spoiler to an agreement.

Finally, and perhaps most importantly, is the region and the world ready to “own” a new Syria? Would the United States be willing to commit a stabilization force of some kind in certain key locations? Would the border states be willing to exercise firm border controls? Are the hundreds of billions of dollars needed for the reconstruction of Syria and for meeting massive humanitarian needs even available?

Fear can drive countries to great lengths. The fear of an extremist takeover in Damascus will almost certainly prompt some intervention by the great powers, but will it go so far as to do what is necessary to build a stable, sustainable situation in Syria? Russia-U.S. talks are a start, and they should be welcomed. But they are only a start, and the United States should keep in mind that its own fear of “owning” Syria will constrain how far it is willing to commit.