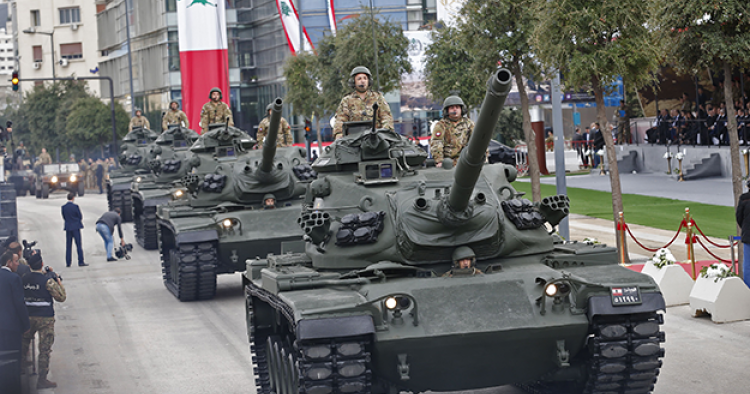 In May 2007, the Lebanese Armed Forces (LAF) faced one of its greatest challenges to date as it battled the dangerous terrorist organization Fatah al-Islam in the Palestinian camp of Nahr Elbared, one of the most densely populated areas in northern Lebanon.

Lacking air support, intelligence, surveillance, and reconnaissance (ISR), and appropriate means of communication, LAF succeeded in seizing the camp after three months of combat. It eradicated around 400 terrorists, at a cost of 174 soldiers killed and approximately 500 wounded.

A decade later, in August 2017, LAF launched operation “Dawn of the Outskirts,” a successful military offensive against 600 ISIS militants hiding in bunkers, caves, and tunnels across a barren mountainous area near Arsal, a remote Lebanese village on the eastern border with Syria. This time around, however, LAF was far faster and more efficient, and it took just 10 days to reestablish the authority of the Lebanese state in the border area. LAF also incurred significantly fewer losses than in 2007 because it was able to make good use of precision guided munitions, ISR by means of air surveillance platforms, air support, and coordinated ground maneuver.

The difference in performance between these two cases is mainly the result of LAF’s greater experience, training, and willingness to fight, coupled with steadfast security assistance from America that has continued uninterrupted since 2006. U.S. security assistance played a decisive role, by covering for most of the conduct of combined arms maneuvers, aerial reconnaissance, and integrated fires, and was instrumental in ensuring LAF’s victory.

The U.S. and LAF have a mutual interest in maintaining U.S. security assistance. The U.S.-LAF partnership is best explained by the following three statements summarizing the rationale provided by Gen. Joseph Votel, then commander of U.S. Central Command (CENTCOM), during his testimony before the House Armed Services Committee on Feb. 27, 2018 and Feb. 5, 2019:

During his visit to Lebanon on July 8, 2020, Gen. Kenneth McKenzie, the current commander of CENTCOM, reaffirmed the importance of preserving Lebanon’s security, stability, and sovereignty, while also underscoring the need for a strong partnership between the U.S. and LAF. All of this clearly shows the strong U.S. commitment to support LAF and the deep-rooted belief in the partnership.

The U.S. military has also assisted LAF in training generations of officers. This has had a great professional impact and resulted in strong military performances, as has been demonstrated in LAF battles against terrorism, such as “Operation Dawn of the Hills” against ISIS in 2017.

And this is not to forget the DIB program, which promotes LAF’s institutionalization and modernization by restructuring defense governance management with the aim of achieving the following objectives:

For its part, LAF is embracing its partnership with the U.S. Lebanon stands at the center of a turbulent Middle East that has suffered for decades from destructive wars. The ongoing conflicts in the region, the threat of terrorism, and the Syrian conflict next door compel Lebanon to effectively manage the challenges and risks emerging across its borders.

The threats to Lebanon’s national security extend over the land, air, sea, and cyber domains, and thus call for cooperation and coordination across multiple domestic and international agencies. In this context, Lebanon must capitalize on the contribution of the international community to counter terrorism.

Although the power of a military force is in the hands of its soldiers, it is also becoming increasingly clear to military organizations like LAF that fighting terrorism, preventing conflict, and maintaining security and stability are transnational efforts that require more than just traditional strength.

A strong LAF that is bolstered by partnerships can operate across a wide range of environments and circumstances. LAF acknowledges the importance of having the U.S. as its top security assistance partner, with a consistent, long-term commitment to training its forces until they become self-sufficient. Moreover, the U.S. and LAF continue to deepen their robust military-to-military ties. Coordination with CENTCOM and other U.S. security agencies has successfully contributed to modernizing and strengthening LAF as a fighting force.

Additionally, the U.S. and LAF are seizing opportunities with great strategic impact and consolidating constructive steps to improve security and stability for Lebanon and the region, securing shared U.S. and Lebanese interests and forging a better outcome for all. Border security and control is a case in point.

LAF is becoming a capable partner in the fight against terrorism with improved land border security and control. However, the fight against cross-border illegal activities and violent extremism is not yet over. Preventing terrorist infiltration into Lebanon remains a priority for both the country and the international community, as there are concerns that a resurgence in terrorist activities in Lebanon could ultimately spread elsewhere.

In order to prevent spillover from Syria, Lebanon has two main priorities in regard to its border security: counter-terrorism and consolidating state authority in border areas in the aftermath of LAF’s victory. It has been possible to pursue these objectives only because there is a strong framework for land border security.

Initially, the border security program is based on the provisions set out in 2006 by U.N. Security Council Resolution (UNSCR) 1701, a resolution that led to a cease-fire of the 2006 war between Israel and Hezbollah.

Paragraph 14 of the resolution: “Calls upon the Government of Lebanon to secure its borders and other entry points to prevent the entry in Lebanon without its consent of arms or related materiel etc.” To fulfill this objective, LAF must maintain effective control over national border areas between the legal points of entry (PoE), and protect those PoEs

Nevertheless, in order for border control to be effective, there is a need to address the complexities in the PoEs’ established procedures. These are related to corrupt practices and incompetence, as well as the lack of both a unified command and control structure and an effective mechanism for coordination. The objective is to effectively manage and control the missions of the diverse border security agencies, such as the Internal Security Forces (ISF), Customs, General Security, and the Ministry of Transportation. Combating corruption lies beyond the scope of LAF’s responsibility, but is of great security and economic concern and impact. The Port of Beirut explosion on Aug. 4 is an example of how tragedy can result from the negligence, corruption, and mismanagement that plague Lebanese PoEs.

In addition, the implementation of UNSCR 1701 entailed restoring the authority of the Lebanese state over national border areas between the legal PoEs, where illegal activities had been taking place for years. To that end, LAF deployed four land border regiments along 212 miles of Lebanon’s border with Syria. These regiments are stationed at pre-existing permanent checkpoints and other fixed positions along the border, such as protected border observation posts, and forward operating bases that were constructed with the support of the U.K.

Nevertheless, Lebanon’s border security mission poses unique geographical, socio-economic, military, political, and budgetary challenges for LAF. The geographical risks include difficult terrain in a barren, mountainous area, exacerbated by harsh weather conditions and a lack of infrastructure for electricity and water. The main socio-economic challenge is that border communities depend on cross-border criminal activities like smuggling for their livelihood. From a military standpoint, spillover from the Syrian crisis poses considerable risks to Lebanon’s internal stability, ranging from the influx of displaced Syrians to smuggling to insurgents and terrorists seeking safe haven.

As for the political challenges, they are related to the following:

Budget restrictions must also factor into the considerations of any security institution. With the current economic and financial crisis in Lebanon, funding is becoming a greater challenge for LAF, which negatively affects its sustainment efforts and operational readiness.

Furthermore, the above-mentioned challenges are easily translated into strategic and operational threats at the domestic and regional levels. They are complicating the execution of LAF tasks, especially those related to the UNSCR 1701 requirements, border control, internal security missions, and fighting terrorism, increasing the need for U.S. security assistance.

US assistance for border security

Collaboration on border security and control is one of the brightest examples of the U.S.-Lebanese partnership. The U.S. has demonstrated a long-term commitment to help Lebanon enhance its already significant border defense and surveillance forces; secure the border from terrorist infiltration; curtail illicit trafficking of drugs and weapons; and manage internal security challenges Consequently, the U.S. security assistance to LAF is instrumental in fostering a proactive border strategy and strengthening LAF capabilities in border security and control.

Lebanon’s border security program exemplifies strategic and operational best practices for program development. It comprises the establishment of a concept of operations based on risk assessment and analysis for effective border operations planning and execution, sustained by equipment procurement for border defense and training programs to gradually reduce dependence on foreign assistance.

To that end, a tailored concept of operations has been established in conjunction with relevant U.S. agencies to address the challenges arising from a variety of identified threats, categorized as terrorist, criminal, state-sponsored, accidental, and natural, across the air, sea, land, and cyber domains.

Perpetrators range from hostile nations that threaten the country's national security to non-state actors bent on smuggling weapons and explosives, including WMDs, for terrorist attacks or subversive activities. In that perspective, LAF is answering the call with unwavering commitment. It is putting stock into U.S. and other international partnerships, while using military power and, when building trust with border communities, soft power. By these means, Lebanon is advancing toward the end state of totally controlling and securing its borders.

The U.S. assistance to LAF for the border security program is helping to mitigate the threat of terrorist infiltration and cross-border smuggling. This was recently demonstrated in the detection of many infiltration attempts by smugglers and cases of illegal immigration across the land border with Syria. U.S. support in equipping the existing border defense and surveillance forces with radars and cameras played an important role in this, facilitating the detection of suspicious activities.

While land border measures continue to yield positive results, the anticipated downsizing of the U.N. Interim Forces in Lebanon-Maritime Task Force increases the likelihood of maritime security threats. These threats, which are largely transnational in character, comprise four broad areas:

There is a growing need to address the central challenge of maintaining order at sea. Consequently, Lebanon must ensure freedom of access to maritime commons by all lawful actors and inhibit the activities of illegal or hostile ones.

To that end, an assessment of the maritime security environment and an identification of the most likely strategic and operational maritime challenges is underway. Once completed, this should lead to the adoption of a new modus operandi that considers how to counter smuggling activities through waterways in general, and most importantly how to prevent, detect, and interdict the entry of WMDs and dual-use materials. LAF can achieve this by developing its maritime surveillance capabilities, interdiction assets, and infrastructure. This should be a future area of cooperation for U.S.-LAF partnership.

The U.S. security assistance program to LAF is delivering tangible results because it is focused, timely, and appropriate to LAF needs. U.S. support is contributing greatly to the consolidation of Lebanese state authority, undermining terrorist activities, and securing Lebanon, all of which benefit regional security and stability.

By remaining committed to strengthening LAF, the U.S. is making Lebanon more resilient as it continues to fight against terrorism and prevent WMD proliferation. This is especially important because Lebanon’s geostrategic position makes it an advanced line of defense against the spread of terrorism throughout the region and around the world.

Rear Admiral (ret.) Joseph Sarkis retired from the LAF after a 37-year career, during which he held a variety of command and staff positions, including most recently, deputy chief of staff for planning from August 2017 to December 2019. He is a Non-Resident Scholar with MEI's Defense and Security Program. The views expressed in this piece are his own.