Vaccine diplomacy in the MENA region 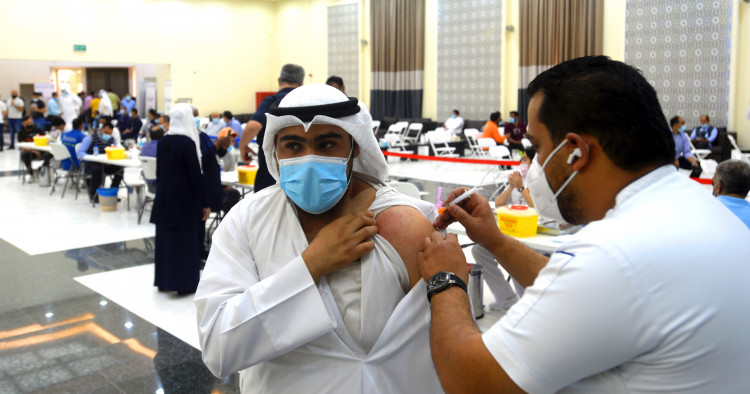 Vaccine diplomacy, or the use of vaccine supplies as a tool of soft power projection, has entered the political dictionary. In a world where COVID-19 has been taking a terrifying human and financial toll, vaccine supplies promise relief and interact with pre-existing politics and foreign policy priorities. China and Russia have sought to enhance their influence in the Middle East and North Africa (MENA) region with a number of high-profile vaccine deals. This has drawn the ire of a beleaguered European Union, whose self-professed goal is to become a more geopolitical union even while its domestic vaccination effort lags behind the U.S. and the U.K.

In a strongly worded statement the president of the European Council, Charles Michel, sought to regain the initiative on March 9. He criticized Chinese and Russian initiatives as “highly limited but widely publicized” operations of “regimes with less desirable values than ours.” Rather than “lagging behind in a sprint,” Europe ”is well placed to lead the field in a marathon,” he argued. He pointed out that alongside the U.S., Europe is the largest producer of vaccines globally and has a technological edge in mRNA vaccines that can be adapted flexibly to future virus mutations. In this context, he pointed to the multilateral COVAX initiative that aims to provide 20% of the world’s population with affordable vaccines and lauded the role of the EU in launching and financing it — about a quarter of its almost €3bn in funding comes from the EU and its member states. There were no official reactions from Moscow and Beijing to Michel’s comments, but Russia has previously accused the EU of politicizing the issue of vaccines.

What is the position and agency of countries in the MENA in the emerging field of vaccine diplomacy and how does it interact with prior political trends? We can discern three groups: (a) leaders with their own attempts at regional vaccine diplomacy (Israel, the UAE, Turkey, and Morocco), (b) a middle group with less expertise than the former that may catch up over the medium term (e.g. Saudi Arabia, Egypt, Iran, Tunisia, Algeria, and Jordan) and (c) countries that are severely challenged in launching successful vaccination campaigns for lack of state capacity, financial wherewithal, and political stability (Syria, Yemen, Libya, Sudan, and possibly Iraq).

The Chinese Sinopharm vaccine forms the cornerstone of vaccination campaigns in the UAE and Morocco, and that of Chinese Sinovac in Turkey. Sinopharm has also made inroads in Egypt, Bahrain, Iraq, and Algeria. The Russian Sputnik vaccine has been distributed in the Palestinian Territories, Syria, Iran, the UAE, and Egypt. The mRNA vaccine of BioNTech/Pfizer is already used in the more “Western-leaning” countries of the region such as Israel, the Gulf countries, Tunisia, Lebanon, and Jordan, but apart from Israel (that cut a deal early on), supplies are still limited, as much of the production is allocated to the U.S. and Europe at this stage. The mRNA vaccine of Moderna does not yet play a larger role in the region apart from some deliveries to Saudi Arabia and Qatar. Like Sputnik, the Astra Zeneca vaccine is based on vector technology. It is cheaper and can be stored in a simple refrigerator, unlike the mRNA vaccines that require sophisticated cooling chains. As such, it is easier to deploy in developing countries. Larger quantities have already been delivered to Morocco, Egypt, and some Gulf countries.

China and Russia have made considerable investments, while their domestic vaccination efforts still lag behind. China has successfully managed to suppress the pandemic at home, but this is not the case with Russia. As a result, the emphasis it places on vaccine diplomacy is all the more remarkable. The Russians, like the Chinese, use their vaccines to bolster relationships with allies, forge new partnerships, and embarrass Western countries for their lack of action. Thus, they try to present themselves as the saviors of the developing world and as relevant powers in a changing world. The strings that are attached to such vaccine diplomacy are already discernible. In Turkey, it coincided with the possible ratification of an extradition treaty with China. This prompted accusations from opposition lawmakers that the Turkish government was cracking down on Uighur refugees, a prosecuted Muslim minority in China, in exchange for vaccines from China.

China is also pushing its vaccines by providing preferential visa regulations for those vaccinated with the China-made COVID-19 vaccine Sinovac. More than 20 Chinese embassies around the world issued new visa policies over the past weeks with this condition, including in the U.S., U.K., Israel, the UAE, and more places where Chinese vaccines are not even available. This Chinese decision essentially says “if you want to visit us, to do business with us, or to maintain any kind of bilateral relationship, you should take our vaccine.” Chinese policy can be seen as a reaction to developments at the recent Quad summit, which brought together leaders from the U.S., Japan, India, and Australia. At the summit, U.S. President Joe Biden announced that the four countries would join forces to finance, manufacture, and distribute at least 1 billion vaccine doses for the Indo-Pacific by the end of 2022.

During his recent visit to six countries in the region (Iran, Saudi Arabia, UAE, Turkey, Oman, and Bahrain), Chinese Minister of Foreign Affairs Wang Yi highlighted a joint venture for vaccine production in the UAE. During his visit, Wang said that his country works with all nations in the region to combat the virus and also said “China will deepen vaccine cooperation in light of the needs of regional countries and discuss with them trilateral vaccine cooperation with Africa.”

Russia, for its part, is in the long process of expanding its influence in the MENA region. Vaccine diplomacy is yet another tool and helps revamp Russia’s image as a benevolent scientific and technological power. The Sputnik vaccine was used as transaction currency in a Russian-brokered prisoner exchange swap between Israel and Syria. Russia also provided the Palestinians with Sputnik, as a "generous grant" from Abu Dhabi, organized by exiled Palestinian leader Mohammed Dahlan. These two cases demonstrate the unique position of the Sputnik vaccine in attempts to enhance Russian influence in the region.

Both China and Russia offer licensing deals that have not been offered yet by Western companies and imply long-term pharmaceutical cooperation, such as the participation in clinical control trials. Russia has cut a deal for its Sputnik vaccine with Egypt, where production facilities will be built. In cooperation with Sinopharm, the UAE will set up a vaccine production facility in Abu Dhabi with the declared intention of becoming a regional trading hub for vaccines. For example, the Sinopharm vaccines that Egypt and the Seychelles received were provided via the UAE. Egypt, in turn, hopes to become a distribution hub for the Sputnik vaccine into Africa. Similarly, Morocco plans to produce the Sinopharm vaccine locally after initial deliveries from China and hopes to develop into a vaccine distribution hub for West Africa, where it has pursued intensive diplomatic and economic outreach activities over the past decades. Turkey seems to have similar plans for Sinovac. Turkey’s ambassador to China, Abdulkadir Emin Önen, said: “We hope to deepen our cooperation with China with respect to the goal of ensuring fair and equitable access to COVID-19 vaccines across the world, especially for those in need in developing countries.” Beyond the redistribution of foreign vaccines, Israel and Turkey are also developing their own vaccines, as is Iran. Turkish officials linked the planned third phase trials of the Turkish ERUCOV-VAC vaccine to the ambition of attaining increased self-dependency, possibly playing a role as a regional vaccine provider.

Vaccine diplomacy also has an impact on domestic politics. Successful vaccination rollouts can strengthen the position of beleaguered incumbents, such as Prime Minister Benjamin Netanyahu in Israel, President Recep Tayyip Erdogan in Turkey, and King Mohammed VI of Morocco. Thus, they could reinforce pre-existing trends toward populism or authoritarianism and personalization of politics in these countries. Israel for example has developed its own version of vaccine diplomacy, sending smaller surplus doses of Moderna vaccines to friendly countries such as Honduras and the Czech Republic. The highly personalized nature of the distribution process prompted Israel’s attorney general as well as Defense Minister Benny Gantz to criticize the unilateral and non-institutionalized decision-making process of Prime Minister Netanyahu. “This is not the first time that significant security and diplomatic decisions are made behind the back of the relevant officials,” Gantz stated, adding that these acts would cause “possible harm to the security of the state, foreign relations, and rule of law.” Another bone of political contention across the region is inequalities of vaccine access on a local level. In Turkey, Kurdish areas in the Southeast lag far behind the rest of the country, Israel’s record-breaking vaccination rollout has excluded Palestinians under its sovereignty in the Occupied Territories, and in some Gulf countries like Kuwait blue-collar migrant workers were given reduced priority of vaccine access, adding to the challenges of their precarious social status.

Against this backdrop, it is understandable why Charles Michel has felt compelled to highlight the substantial vaccine exports of the EU at a time when it faces growing backlash for a tardy vaccine rollout at home and the U.S. and the U.K. prioritize domestic supplies. Until late summer, Western countries will likely be preoccupied with their domestic vaccination campaigns. As long as they are unable or unwilling to contribute more to international vaccine distribution, through words and through actions, there is a window of opportunity for China and Russia to expand their influence. Under these circumstances, the multilateral COVAX initiative that the EU sponsors and that the U.S. joined later under the Biden administration is promising. However, it could run the risk of being perceived as too little too late. Ultimately, MENA leaders are keen to see the U.S. and the EU play a more active part in international vaccine distribution and administration. The latter must reconsider their vaccine policies if it wishes to maintain its significant influence in the region and counter a trend of democratic backsliding and authoritarian restoration. If not, relations of MENA states with Russia and China could emerge stronger in a post-pandemic world. While the EU’s achievements in vaccine development are laudable in principle and can play a significant role in equitable vaccine access in the region and beyond, overt politicization of such efforts can only be avoided if the EU and the U.S. are leading multilateral efforts to provide alternatives.

Eckart Woertz is the Director of Middle East Studies at the German Institute for Global and Are Studies (GIGA). Roie Yellinek is a researcher at the Begin-Sadat Center for Strategic Studies and a non-resident scholar at the Middle East Institute. The views expressed in this piece are their own.

Photo by Xinhua/Asad via Getty Images