Vengeance, repression, and fear: The reality behind Assad’s promises to displaced Syrians 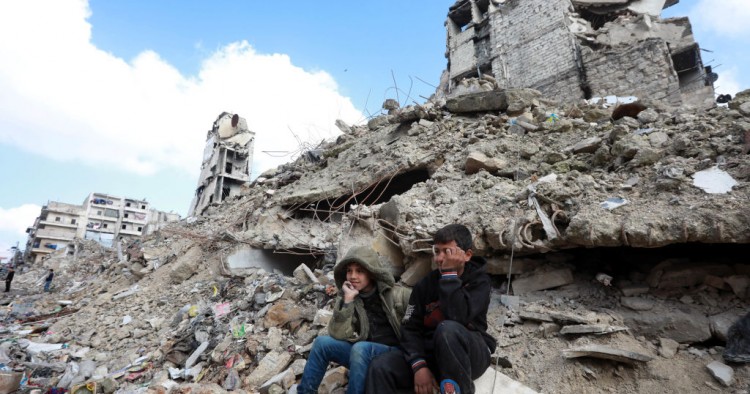 The team of researchers from the Syrian Association for Citizen’s Dignity (SACD) worked for months under extremely challenging conditions to interview 165 people in Homs, Damascus countryside, Dara’a, and Aleppo to document the security situation of returnees and those living in areas covered by “reconciliation agreements” in parts of Syria under the control of the regime of Bashar al-Assad. The resulting report and its underlying research comprise an unprecedented effort, considering that no international organization, including the UNHCR, has real, uncensored access to all areas under Assad’s control. It is virtually impossible to publicly gather information in these areas, especially when it comes to the security situation, threats facing returnees, their access to basic services, and their views on the return process and other relevant issues. That is why this report provides unique insights into one of the most relevant issues for the future of Syria.

The main conclusion of this research is that it is not safe for displaced Syrians to return to Assad-held areas. Widespread and systematic human rights violations continue to be committed against Syrians in these areas by the regime, its security apparatus, militias, and foreign forces. Arbitrary arrests, forced recruitment, extortion, and the absence of basic services are the main factors driving this fear and the returnees’ desire to leave their homes again, this time permanently. Nearly 60 percent of the interviewees (and 73 percent of those living in areas the regime seized by force) reported that they would seriously consider leaving if an opportunity presented itself. Out of this number, a third stated they would try to reach Europe, with Turkey, north Syria, and Arab countries identified as other destinations. Returnees overwhelmingly asserted that they regret their decision to return, regardless of the hardship they faced in displacement; 63 percent are actively seeking a way to flee again.

The most destructive pattern of abuse is the indiscriminate arrests and detention without a charge by the security services. More than a quarter of those interviewed had been detained themselves or had a family member arbitrarily arrested by the security services. Of those, 75 percent had been arrested within the last 18 months. More than 70 percent of those arrested had to pay a bribe to be released. Beatings and torture are common practices in detention. Several interviewees’ relatives were taken to unknown locations, after which they were never heard from again.

Forced conscription is rampant, especially in areas integrated under “reconciliation agreements,” where up to 75 percent of those interviewed said they or their family members were wanted for recruitment into Assad’s forces. Conscripted fighters are almost inevitably sent to the most dangerous frontlines; many, especially young men, have been killed either in battle or in murky circumstances. Many of those wanted by the security branches for being perceived as “anti-Assad” are forced into the military, sent to the frontlines straight from detention, and are never seen again.

Two-thirds of the interviewees stated that they live in constant fear of arrest or harassment from the security services and various militias that run a maze of checkpoints — particularly those in or from areas under “reconciliation agreements.” Corruption and extortion by the regime and militias permeate every aspect of life for returnees. Interviewees reported having to pay bribes to carry out the most menial of activities, such as obtaining documents or transporting produce to the market. Two-thirds of the returnees have lost their former source of income and are now unemployed or engaged in manual, temporary work that cannot provide a basic standard of living for their families.

Most interviewees from areas covered by the regime’s “urban development laws” consider themselves to be affected by the discriminatory laws and decrees governing the destroyed areas. They are systematically denied the right to their property in an openly retaliatory manner, especially in areas where the regime has seized control by force. Returnees to these areas are particularly affected, as regime officials know that one of the key reasons they returned was to officially document their property to ensure it is not lost.

This report clearly demonstrates the need for decision makers in host countries and at the international level to re-examine their positions and policies regarding Syrian refugees, who are increasingly being forced to return to a situation of widespread insecurity and uncertainty. Sending displaced people to Assad-held areas is almost certain to expose them to further persecution and harassment, which in turn is likely to drive more displacement.

The data collected in this research provide empirical evidence in support of a long-held position of SACD: the return of displaced Syrians is impossible without a comprehensive political solution that guarantees the rights of returnees, including their rights to be free of persecution, discrimination, and harassment, their rights to safety and dignity, their rights to their property and protection under the law, and the freedoms guaranteed to them as citizens and human beings. This research gives international and regional decision makers working to help displaced Syrians a unique insight into the real consequences of ill-conceived policies, especially those that accommodate the Syrian regime and Russia’s policy of forced return. The report’s findings reinforce the need to protect the rights and dignity of Syrian refugees and to provide adequate living conditions in their places of displacement to protect them from forced return, and to ensure their wellbeing and dignity as a prerequisite for a lasting political solution and any hope of genuine stability in Syria and the region.

Fadi Nzhat is a SACD trustee from the Damascus countryside. He currently lives in Atme, in north Idlib, and serves as the director of Iradati, an education and relief foundation. The views expressed in this article are his own.