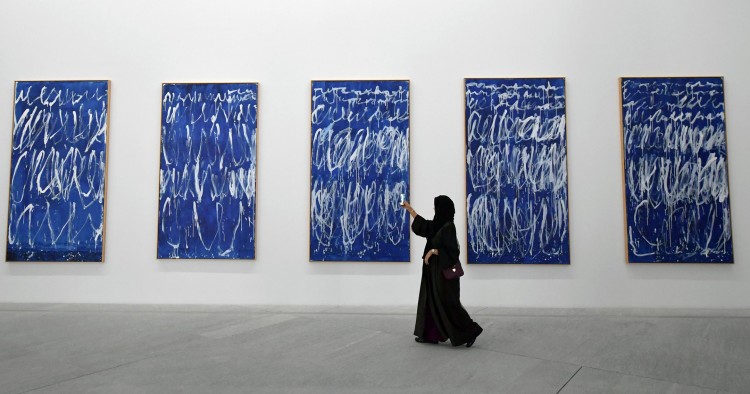 The countries of the Middle East are using art to remodel their national identities. Billions of dollars have been spent on colossal building efforts and massive acquisition programs in an effort to expand the cultural sector in the Middle East, especially in the Gulf. Art acquisition now appears to be part of a geopolitical strategy by Gulf countries to use their hydrocarbon money to purchase cultural clout and establish themselves as international cultural centers.

Developing national art collections that aim to challenge those of traditional art hubs such as London, Paris and New York is part of a two-pronged strategy: Gulf countries’ cultural initiatives aim both to drive national development with increased investment in and attention to creative industries, and to redefine their relationship with the wider global community. The absolute monarchies have the financial means to proactively push their transformation from dependence on the hydrocarbon sector to a knowledge economy.

While state-led initiatives showcasing the interdisciplinary practice of national art conservation is the strongest factor driving national art scenes, the responsibility for increasing access to museums and collections still belongs with independent royal and wealthy patrons.

Institutions like the Qatar Museums Authority streamline the national agenda of combining resources for museum development with establishing a platform for global power. Qatar's quest to collect artwork and preserve artifacts strategically places the monarchy at the forefront of the global art community. Qatar’s collection has the world’s largest accumulation of modern and contemporary Arab art; the collection ranges from modern to post-war and contemporary pieces of art. Additionally, in building their national collections the Qataris have made headlines by setting art-market records, among them the $250 million paid for Cezanne’s “The Card Players” in 2012.

The Qatar Museums Authority (QMA) has overseen the development of the national art collection under the direction of Sheikha al-Mayassa, the sister of the ruler of Qatar and one of the top collectors in the region. As the chairwoman of Qatar Museums, her annual acquisition budget is estimated to be $1 billion. QMA centralizes resources and provides a comprehensive organization for the development of the country’s museums and national and international cultural projects.

Another regional example is the Sharjah Art Museum, which was inaugurated in 1997 as the first dedicated art museum in the Gulf, and has since had regular exhibitions. The museum holds a collection of modern and contemporary art made by Emirati and other Middle Eastern artists. The museum regularly exhibits art from the personal collection of the ruler of Sharjah, Sheikh Sultan bin Mohammed al-Qasimi.

Additionally, Barjeel Art Foundation, founded by Emirati Sultan Sooud al-Qassemi, is a museum and cultural institute operating from a permanent base in the Maraya Art Centre in al-Qasba, Sharjah. The foundation’s permanent collection consists of over 1,000 pieces of modern and contemporary art from Arab artists and is the most comprehensive, publicly accessible art collection in the Middle East. The permanent collection is actively loaned out to international exhibitions as part of outreach programming and education initiatives.

In the UAE, a new outpost of the Louvre exhibits not only loaned pieces but also artwork owned by the UAE. Abu Dhabi Louvre, which is funded by the Abu Dhabi Department of Culture and Tourism, amassed a collection of more than 600 artworks for the museum’s permanent collection. The exhibition does not necessarily have a strong thematic narrative but rather illustrates the UAE’s wide holdings of art objects.

Various levels of regional cooperation are evident in the art world, including the recent example of Saudi Arabia’s purchase of “Salvator Mundi.” The Saudi prince who purchased the piece has reportedly scheduled the loan of the artwork to the emirate’s culture ministry for the planned Leonardo exhibition at Louvre Abu Dhabi in 2018.

Saudi Arabia has recently captivated the art world’s attention with its increasingly strong art scene and focus on art initiatives, diverting the spotlight from Qatar, which has dominated the sector for years. Saudi Arabia’s Crown Prince Mohammed bin Salman has put creative initiatives at the forefront of the kingdom’s Vision 2030 plans. The crown prince recently announced the creation of the Misk Art Institute, an artist-led organization operating under the state-funded Misk Foundation and directed by Saudi artist Ahmed Matar. The Misk Art Institute has planned future locations in Riyadh and Abha and plans to launch regional cultural programs to promote art in the Middle East and the country.

In 2015, the Al Mansouria Foundation for Culture and Creativity collaborated with the Bahrain's culture ministry to display an exhibit of modern and contemporary Saudi art. Bahrain’s information ministry has been a major patron of local arts, and has organized solo and group exhibitions as well as a prominent annual group art exhibition at the Bahrain National Museum, inaugurated in 1988. The museum also houses a permanent contemporary art collection showcasing Bahraini masters.

National acquisitions and support for regional art scenes are just the first step in a series of serious overhauls. Genuine support of an art scene mandates support for freedom of expression, and while the regional taboos on certain themes are routinely confronted, the struggle is still an uphill one. Part of the long-term strategy of national art collections are fundamental changes in perspectives.

While cultural diplomacy is a vital currency for the region and a fundamental part of soft power, part of the Gulf countries’ long-term strategy for economic diversity mandates an element of local focus. The region views museums, and by extension a strong cultural sector, as an important part of expressing a national and regional identity.

Billions of dollars, colossal building efforts, and the massive acquisition programs blend in revelatory ways in the Gulf. Combating cultural stereotypes projected onto the oil-rich countries, creating landmarks that increase tourism and tourist income, and developing national creative economies has a restorative impact. The cultural landscape of the Middle East is changing, and the art acquisitions are all part of national social development plans.