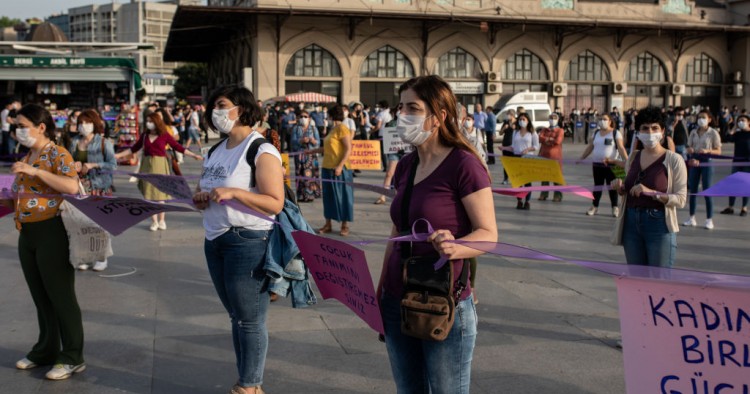 “I urge all governments to put women’s safety first as they respond to the pandemic.”

In April, UN Secretary-General António Guterres called for urgent action to fight violence against women during the COVID-19 lockdown. In the UK, Home Secretary Priti Patel said, “You will not get away with your crimes,” sending a clear message to perpetrators. In Austria, pamphlets with support information for victims of domestic violence became available in markets. Turkey, where domestic violence is very common, largely stayed silent, however.

The Turkish state has never been transparent in declaring the numbers on domestic violence to the public, but surprisingly they shared official figures in May. 81 women were killed, according to the police data. The Turkish Ministry of Interior also claimed that contrary to the increase in domestic violence in other countries, during the lockdown there has been a decrease in Turkey in reported cases of violent crimes against women compared to the same period last year. Law enforcement officers recorded a total of 88,491 domestic abuse-related incidents between January 1 and May 20. But this raises an important question: How is the system handling victims’ complaints?

Home has never been a safe place for women who are subjected to violence by their partners or family members. The global lockdown triggered an upsurge in domestic violence and exacerbated the existing socio-economic vulnerabilities of women all around the world. In Turkey, access to protective and preventive mechanisms is one of the great challenges for victims of male violence. Supporting women victims of abuse has never been a priority for the Turkish government. This did not change during the pandemic. Despite the legal framework, the challenges facing women in Turkey today stem from the implementation of the laws. Women can apply directly or through a prosecutor for an order from a family court to place them under surveillance against perpetrators. Nonetheless, insufficient implementation of legislation is putting women’s lives in danger every single day.

In March, the Turkish Council of Judges and Prosecutors left women unprotected from domestic violence during the lockdown. The council decided that necessary legislative measures, such as vacate and stay-away orders, pursuant to “Law No. 6284 to Protect Family and Prevent Violence Against Women,” should be evaluated in a way would not threaten the perpetrator’s health. Under the Istanbul Convention, ratified by Turkey in 2011, measures taken in accordance with Article 52 (Emergency Barring Orders) should give priority to the safety of victims or persons at risk. In a legal context, the council’s decision is therefore an explicit violation of the law.

“We cannot take any protective measures since you are not married”

As of October 2019, there are 144 women’s shelters with a bed capacity of 3,454 in Turkey. The law, however, requires metropolitan municipalities and every municipality with 100,000 or more residents to provide a shelter for women, meaning the total number of shelters is falling short of expectations. Mor Cati (“Purple Roof”) Women’s Shelter Foundation of Istanbul is the oldest foundation dedicated to providing shelter for female victims of abuse. They have released monthly reports on coronavirus and domestic violence. In one of the reports, a college student’s experience is shared. A young woman, after being beaten by her father and brother, went to the police and made a complaint against them. “We cannot take any protective measures since you are not married,” the officer said. Then the police called the Violence Prevention and Monitoring Centers (SONIM), which provide health, judicial, and psychological support for victims. “Unless the abuse is reported, they cannot put you in a shelter,” the police told her. It is important to note that the law applies to all women regardless of their marital status and providing refuge does not necessarily require abuse to be officially reported.

In another case during the COVID-19 lockdown, a woman, escaping an abusive marriage, went to a police station and was sent to a shelter. Unluckily, the police officer she filed a complaint with was her husband’s friend and he shared the address of the shelter she was staying at. After this unlawful act, women’s rights activists started asking on social media if any legal action was taken against the police officer who broke the law by revealing confidential information. There is an ongoing investigation about the officer.

Despite the heightened concerns over violence against women during lockdown, the Turkish political system has showed no interest in using the existing mechanisms at its disposal efficiently. KADES (Woman Support Application) is an app developed by the Turkish National Police and launched in 2018. Any woman can download it for free on iOS or Android smartphones and activate it by using their national ID number. In case of an emergency, women can seek police assistance simply by pressing a large button on the screen. This life-saving but little-known application has not been promoted in public spaces during the lockdown. Even though the country is now back to the “new normal,” violence against women continues — and so too do the challenges faced by women in Turkey.

Burcu Karakaş is an independent investigative journalist based in Istanbul, Turkey. She is a Non-Resident Scholar with MEI's Turkey Program and the Turkey correspondent for Germany’s international broadcaster Deutsche Welle. The views expressed in this piece are her own.