The war in Syria is far from over, but its nature is changing 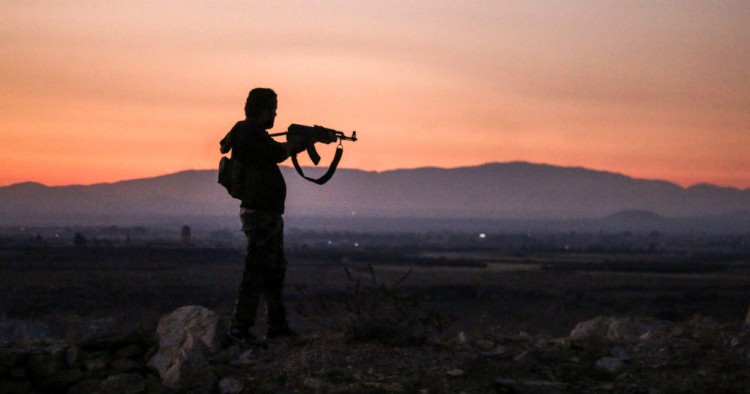 Since the beginning of 2018, the Syrian regime has expanded its control of territory across the country from approximately 52 percent to 62 percent. That 10 percent of territory gained was a crucially important 10 percent, encompassing opposition-held areas in Syria’s southwest, rural Homs, and eastern Ghouta, as well as a small pocket of northern Hama’s countryside. That territorial expansion — in part facilitated by increasing international fatigue with the crisis in Syria — saw opposition holdings decline from approximately 13 percent to 10 percent. As ISIS’s territorial “state” was simultaneously rolled back and then defeated, an international consensus increasingly emerged that claimed Syria’s war was “winding down.”

There is no doubt that the geographic scope and intensity of conflict is not what it was at the height of hostilities in 2014 and 2015, but it is certainly not finished either. In fact, the Syrian regime’s most important test case for capturing and then stabilizing “reconciled” territories — in the southwest governorates of Quneitra, Deraa, and al-Suwayda — has not been a success. In fact, it continues to destabilize in dangerous ways, with more than 160 attacks reported in the last six months — ranging from drive-by shootings and assassinations, to armed raids, organized assaults, and bomb attacks and ambushes. The scale and sophistication of these attacks has increased over time, as evidence of an armed insurgency is becoming ever more obvious.

When pro-regime forces took control of Syria’s southwest, they did so under the guise of “reconciliation,” a process through which civil and military components of the opposition were offered the chance to “reconcile” through an “amnesty” and remain present in their home areas. While guarantees of aid and humanitarian assistance mostly failed to materialize, the regime’s near-constant violation of the amnesty clauses appear likely to have been the most significant catalyst for renewed resistance. Arbitrary arrests, frequent disappearances, and forced conscription sharply eroded confidence in the “reconciliation” process and despite the presence of 100 Russian military police in the region, this repressive situation has only worsened over time.

In addition to the abandoned promises of “reconciliation,” a dramatic influx of pro-regime checkpoints controlled by a wide array of different, often rival or competing security bodies and factions has generated deep discontent. Notwithstanding the intimidating presence of Syria’s Air Force, Military and Political Security directorates, as well as the Fourth Mechanized Division, locals have become increasingly aware, fearful, and hostile to a proliferating network of positions controlled by Syrian proxies for Hezbollah.

Indeed, as Syrian and Russian attention has drifted elsewhere, Iran and Hezbollah have invested heavily in re-establishing a presence in Syria’s southwest, in close proximity to Israel. Whereas two years ago Iran’s strategy encompassed a substantial non-Syrian component, the mission today appears to be almost entirely Syrian. In fact, just as they are in Syria’s eastern desert, Iran and Hezbollah are recruiting heavily from within the local Sunni and even Druze communities. Until now, Iran’s southern strategy appears to be centered around four key military facilities: in Deraa city (managed by Hezbollah); in the al-Lajat region; in the Brigade 52 base (run by Hezbollah commander Eyad Qassem); and in the al-Sabr base (commanded by Hezbollah figure Mustafa Mughniyeh).

All of this and more — including corruption, unemployment, insufficient humanitarian aid, and negligible stabilization assistance — have created conditions for a resurgence of insurgent activity. In simple terms, none of the root causes of the war have been ameliorated. In fact, by remaining unaddressed, most of the root causes have worsened. According to three separate sources who have been deeply involved in southern Syria’s opposition since 2011, a substantial portion of attacks in recent months were part of a fledgling organized insurgency whose roots date back to the earliest days of armed resistance in Deraa in the spring and summer of 2011. Based primarily along tribal and familial lines, small numbers of cells have begun to form semi-autonomously from each other and for now remain dependent on secret caches of weapons, ammunition, and explosives hidden by the Free Syrian Army’s Southern Front before “reconciliation” in July 2018. There has been no formal attempt to unify or centralize the efforts until now, though some cells are aware of each other’s existence and operations.

While it’s extremely unlikely that such localized insurgent activity will become anything like what we witnessed in Syria in years past, it is far from insignificant. In fact, while the Syrian regime continues to suffer from a crippling manpower shortage and conflict in Idlib and potentially later in eastern Syria sucks up valuable resources, any level of sustained insurgency will prove a serious challenge to Syrian stability. Without a meaningful and just political process and settlement and the implementation of real change, this is a virtually inevitable eventuality. The war in Syria is far from over — it has merely changed nature. The fact that neither al-Qaeda nor ISIS has managed to re-emerge as an equally serious player in Syria’s south is reassuring, but it is by no means a long-term guarantee.