Water and Conflict in the Middle East 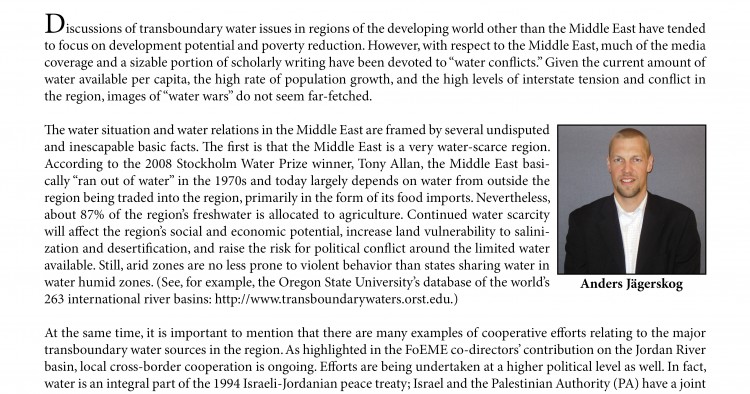 Discussions of transboundary water issues in regions of the developing world other than the Middle East have tended to focus on development potential and poverty reduction. However, with respect to the Middle East, much of the media coverage and a sizable portion of scholarly writing have been devoted to “water conflicts.” Given the current amount of water available per capita, the high rate of population growth, and the high levels of interstate tension and conflict in the region, images of “water wars” do not seem far-fetched.

The water situation and water relations in the Middle East are framed by several undisputed and inescapable basic facts. The first is that the Middle East is a very water-scarce region. According to the 2008 Stockholm Water Prize winner, Tony Allan, the Middle East basically “ran out of water” in the 1970s and today largely depends on water from outside the region being traded into the region, primarily in the form of its food imports. Nevertheless, about 87% of the region’s freshwater is allocated to agriculture. Continued water scarcity will affect the region’s social and economic potential, increase land vulnerability to salinization and desertification, and raise the risk for political conflict around the limited water available. Still, arid zones are no less prone to violent behavior than states sharing water in water humid zones. (See, for example, the Oregon State University’s database of the world’s 263 international river basins: http://www.transboundarywaters.orst.edu.)

At the same time, it is important to mention that there are many examples of cooperative efforts relating to the major transboundary water sources in the region. As highlighted in the FoEME co-directors’ contribution on the Jordan River basin, local cross-border cooperation is ongoing. Efforts are being undertaken at a higher political level as well. In fact, water is an integral part of the 1994 Israeli-Jordanian peace treaty; Israel and the Palestinian Authority (PA) have a joint water coordinating committee; and over the years there has been cooperation on the Nile River through the Nile Basin Initiative (See www.nilebasin.org). Marwa Daoudy’s article on the Euphrates-Tigris waters also points to the ongoing efforts to identify ways to move forward collaboratively on issues concerning those particular water sources.