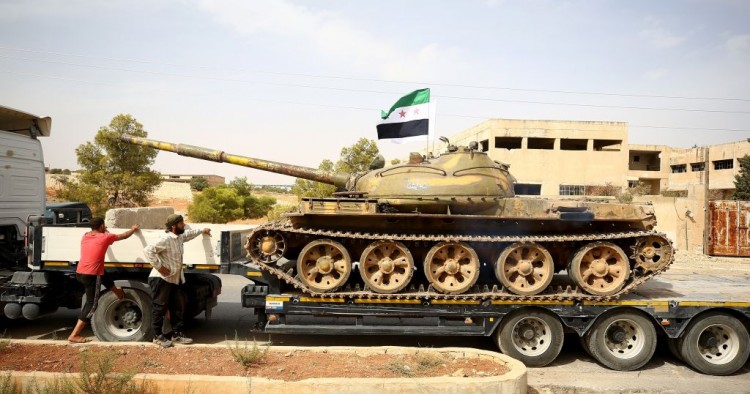 Since May, the Idlib region in northwestern Syria has seen a spike in armed conflict and a spiral of violence as Russia has tried to pressure Turkey to implement the 2018 Sochi deal, under which both sides agreed to set up a demilitarized zone in the area. Turkey has not backed down, however, and has responded harshly to Russia’s actions, reminding Moscow of the potential costs of a major military operation. While the violence threatens the 3.5 million civilians in Idlib, the instability also represents an opportunity for both countries to revive the Sochi deal, which was previously torpedoed by both the Assad regime and the Salafist-jihadist group Hayat Tahrir al-Sham (HTS). Since the start of the regime’s military campaign last month, the National Army, a group of Free Syrian Army factions that fought alongside Turkish soldiers, has gradually entered the region. This development may balance the HTS presence and ultimately help to force the group out of the demilitarized zone, ensuring a continued Turkish-Russian consensus on Idlib.

Over the past six months, the internal dynamics within Idlib have changed dramatically. As part of a two-step campaign launched at the beginning of the new year, HTS has consolidated its control over the area, targeting Turkish-backed factions and eliminating or containing its rivals. As Murat Yeşiltaş and I have argued, this development will likely prompt Turkey to wait for a new window of opportunity to implement the Sochi deal, instead of taking military action itself, rebranding HTS, or accepting a devastating regime military campaign.

The Assad regime has bombed Idlib in a bid to prevent a real ceasefire and gradually escalated to recapture the region with the aim of taking back every inch of Syrian territory. On May 6, the regime, backed by Russian airpower, launched a ground assault toward the Ghab Plains, violating the Idlib de-escalation zone and carrying out airstrikes on civilian targets — including UN demarcated hospitals. This operation made Russia’s role in the escalation clear, as it has been carried out exclusively by Russian-backed units like the Tiger Forces, the 5th Corps, and the al-Quds Forces. Perhaps contrary to Russian expectations, however, Turkey has not yielded and has made clear the cost of working against its interests in Syria. It has supplied opposition groups with anti-tank and Grad missiles, facilitated their use against regime assaults, and encouraged counter-attacks, ultimately leading to the capture of an area of around 38 square kilometers.

Since the beginning of May, reinforcements have bolstered Idlib’s defense. Factions of the Turkish-trained National Army in Afrin and the Euphrates Shield areas, namely Jabhat al-Shamiya, Firka Hamza, 9th Division, Jaysh al-Islam, Authenticity and Development Front, Ahrar al-Sharqiyyah, Jaysh al-Sharqiyyah, Ahrar al-Sham, 20th Brigade, Liwa al-Samarkand, Hasakah Shield, and Liwa 112, have joined the fight in rural Hama, adding more than 1,000 fighters. This was the first time these factions had entered Idlib since HTS’ rise to dominance. Indeed, Jabhat al-Shamiya was evicted by Jabhat Fatah al-Sham, HTS’ predecessor. The fighters of Ahrar al-Sham from the Ghab Plains were similarly forced out by HTS to Afrin and have now returned and regained control over the region. Even the Firka Hamza militia — formed and equipped by the Pentagon to fight ISIS — has entered Idlib, marking a major blow to HTS’ ambitions of “cleansing” it of potential rivals. This represents yet another significant change in dynamics within the region and could have important longer-term consequences.

Beyond simply testing the waters with troop movements, anti-HTS groups also brought their religious scholars like Jabhat al-Shamiya’s Shari Mohammed Khatib, known for his close ties with Sufis. The arrival of such figures offers an alternative to HTS’ Salafi teachings and may help to change the ideological balance of power. As the National Army units continue to fight on the frontlines against the regime, they have boosted their credibility in the eyes of both locals and the Turkish-backed National Front for Liberation (NLF).

These developments have undermined HTS both militarily and rhetorically. Tactically, to repel the regime, the group has had to allow its rivals to enter Idlib, breaking its dominance and eroding its hegemony. This has also undercut HTS’ arguments about the National Army — that they are border guards for Turkey, deserters from the Syrian revolution, or even apostates to some. This could represent a real opportunity. The current escalation has changed the power dynamics in Idlib, challenged HTS’ propaganda, and underlined the importance of Turkey. HTS has long claimed to be capable of defending Idlib by force, but it is now clear that is not the case, and only assertive Turkish action can prevent the regime’s advance.

The first attempt to implement the Sochi agreement failed, but this should not preclude a second try, especially with Turkey signaling its resolve. Factions of the National Army, together with the Turkish-backed NLF, can balance HTS in Idlib and force the extremists out of the demilitarized zone. In the past, only parts of the NLF confronted HTS, and ultimately lost. But today, with the active support of the National Army, the factions of the NLF have the capacity to win in a fight against HTS, as they have proved before. Critically, HTS may also be reluctant to attack the National Army, fearing a direct confrontation with Turkey.

Improved coordination between the two armed opposition structures and a Moscow-Ankara settlement on de-escalation will have an impact on Idlib’s internal dynamics. When fighting against the regime subsides, the potential for infighting among extremists and other opposition groups increases. HTS has always found a pretext to attack the Syrian opposition when it felt threatened or saw an opportunity to expand its control. To enforce the demilitarization zone, the opposition presence must grow gradually or a confrontation with extremists will be inevitable. A good starting point would be a Russian concession of areas recently captured by the regime to factions of the National Army.

The latest developments represent a very real opportunity, but only if Russia is serious about the Astana process and the Sochi deal. However, if Moscow is only using HTS as a pretext to pursue a military solution in Syria, rather than a political one based on the Geneva and Astana processes, then Ankara has made it abundantly clear that Idlib will become a very costly battle for Russia and it will do whatever is needed to force the pro-regime bloc to the table once more. For the sake of both parties, it’s worth trying again.

Ömer Özkizilcik is an analyst and writer in the Security Department of the SETA Foundation. The views expressed in this article are his own.