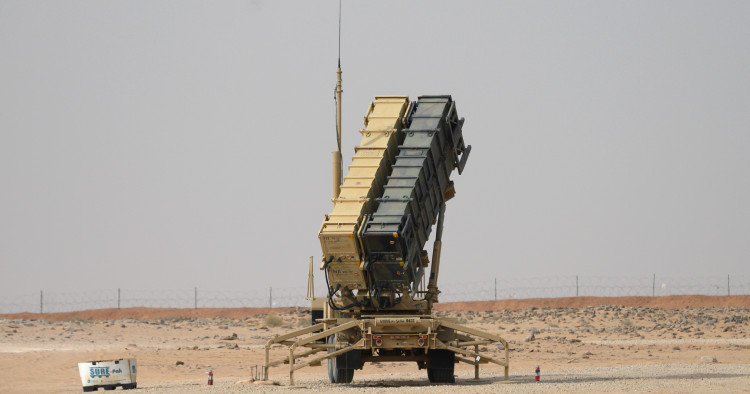 The Middle East is a region in constant flux, but there are some things one can always rely on. First of all, the various Gulf states feel threatened by ongoing regional developments, be it Iranian expansionism, terrorism, or unpredictable political movements such as the Arab Spring.

Another constant is that the countries of the region prefer to buy advanced military equipment, particularly the latest Western equipment, as their go-to method to meet and counter these threats. In some areas, this equipment-based view of military capacity building is downright unhelpful. The early tactical failures of the far more numerous Russian forces at the hands of the fewer and mostly poorly equipped Ukrainians point to the importance of developing the entire range of military capacity factors, not just equipment. Effective military capacity is not something that one can buy off the shelf.

One area is more equipment dependent than others, however. Ground-based air defense does require competent, agile, and critically thinking leaders to be effectual, but it is more reliant on advanced and working equipment than most other areas of ground combat. The Royal Saudi Air Defense Forces, for example, are probably the single most effective branch of any Arab military service. They have intercepted hundreds of drones, missiles, and cruise missiles in real-time combat. And they have adopted some tactics that are a standard above even those used by the U.S. Army. Most notably, there are no reports of fratricide or accidental shoot-downs by Saudi ground-based air defense, a problem which has bedeviled American forces in combat.

But the Saudis will be unable to continue intercepting missiles without their Patriot air-defense batteries. At the end of 2021, after shooting down hundreds of incoming Iranian missiles, mostly fired from Yemen, the Saudi air-defense missile inventory was severely depleted. It is worth noting here that standard practice is to fire two Patriot missiles at each incoming target; so the Saudi inventory was being rapidly depleted by continued Iranian provisions of missiles to the Yemeni Houthis attacking from across the border.

Patriots: Everybody wants them

We were all raised in the industrial age and tend to view production of any modern item as an assembly line process: We envision multiple workers (and increasingly machines) performing a small adjustment to an item that moves rapidly from station to station until it emerges as a finished product. The major components of missiles — such as circuit cards and fabricated metal parts — are, indeed, made this way. But the ultimate assembly is much more artisanal. Putting together modern missiles and radars requires skilled craftsmen and is much more complex than simply hiring more workers and running the line longer (the same applies to automobiles, as Tesla CEO Elon Musk discovered).

In normal times, the entire annual production run of most sophisticated missiles, such as Patriots, is in the hundreds, not in the thousands. And these are not normal times. The Russian re-invasion of Ukraine, increased Chinese aggressiveness in the Pacific, and accelerated North Korean missile testing on the peninsula have combined with the ongoing Iranian proliferation of missiles to spur a global re-examination of air-defense capabilities and a natural increase in demand for the battle-proven Patriot system. So there are many potential customers for a product that is produced at an artisanal pace.

In the short term, Saudi Arabia dealt with its Patriot shortage by turning to partners. The United States facilitated the transfer of Patriot PAC-2 missiles from other Gulf states (thought to be Qatar and Kuwait) in March 2022, and earlier cooperated in the Greek transfer of an entire Patriot battery to the kingdom.

In the long term, Riyadh would need a new supply of Patriot missiles from the United States. But there was a wrinkle: As a candidate, President Joe Biden had famously vowed to stop selling weapons to the kingdom and make it a “pariah” over the murder of Saudi journalist Jamal Khashoggi. And the most energetic and media-savvy part of his party introduced bills seeking to restrict weapons transfers to Saudi Arabia. What was normally a routine sale of (what most would consider to be) a defensive weapon system was thus caught up in complex issues related to the president’s earlier campaign promises, his desires to placate the Democratic Party, and his imperative to renounce the controversial weapons sales policy of the previous administration.

The world is a complicated place

The February 2022 Russian invasion of Ukraine has both changed matters and complicated them. Suddenly, Saudi Arabia could not be viewed in isolation: It was now a key player if global oil prices were to be brought down. Key Biden administration personnel adopted a “realist” position toward Saudi Arabia and pushed for a reconciliation. Ultimately, President Biden visited the kingdom and met with the controversial Crown Prince Mohammed bin Salman in an act viewed by some Saudis (and members of the U.S. president’s party) as a capitulation but was in reality a necessary act of realpolitik.

Weeks later, the announcement was made of a proposed sale of 300 Patriot missiles to the kingdom as well as two launchers and 96 missiles of the more advanced Terminal High-Altitude Air Defense (THAAD) system to the United Arab Emirates. These sales, worth an estimated $5 billion, would have been vetted with relevant congressional committees before the announcement and were probably delayed only by the ongoing debate on Capitol Hill over adding provisions to the National Defense Authorization Act restricting U.S. weapons sales to the kingdom.

So will Saudi Arabia get its missiles? Almost certainly. But it will probably not receive them as fast as it might wish. China is currently incentivizing East Asian neighbors to maximize their own missile defenses, and Russia’s ongoing use of cruise and ballistic missiles in Ukraine is motivating U.S. allies in Europe to upgrade their Patriot stocks as well.

Others in the Middle East are taking note and will probably seek to upgrade their missile defenses too. The other Gulf states that sent missiles to the kingdom earlier this year will expect to be backfilled (probably out of the Saudi purchase), while NATO states simultaneously seek to upgrade and restock their air defenses.

Most countries that have already fielded Patriots will seek to upgrade their associated radar systems to the new Lower Tier Air and Missile Defense Sensor (LTAMDS) configuration, which is currently in prototype operations with the U.S. Army. In contrast to the existing Patriot radar (utilizing 1980s technology), the new LTAMDS will have the ability to operate in a 360-degree field of view instead of just 120 degrees and feature a greatly extended range due to the use of miniaturized gallium nitride elements. These advanced radars will cost about $60 million each. When they are approved for export, every country that currently fields Patriot batteries will likely rush to upgrade.

So we face a possible run on limited air-defense resources. Normally, if a Gulf state is unable to purchase American equipment, it may turn to Russia — the only other global supplier of battle-tested missile defense systems, in the form of the S-300/S-400s. But Western sanctions on Russia’s defense industry may rule that out. Other systems, such as the European Aster, may appeal to countries that feel they need an immediate defense capability but are not deeply invested in Patriots.

The most probable outcome is that the United States will continue in its missile defense backstop role in the Gulf. The U.S. response to the 2019 Iranian attacks on the Saudi Abqaiq refinery will probably serve as the model: In times of extreme risk or distress, Washington will dispatch batteries of American Patriots for a period of time to bolster its partners or deter an aggressive foe. But this will be limited. The main effort in the Gulf will continue to be training and provisions of the material to develop an indigenous missile-defense capability.

We can expect ongoing prioritization efforts to produce and ship new air-defense weapons to the region, with the U.S. likely to make up temporary shortfalls in various high-threat areas while equipment is being produced. The long-standing U.S. aim of developing a truly integrated air- and missile-defense network in the region is still unlikely to be achieved — there is a threat, but it is not that great of a threat. We will probably see more frequent and realistic multinational air-defense exercises, possibly to include Israel.

The battlefield success of the Patriot and THAAD systems is undeniable. These are truly game-changing weapons. But they still rely on trained and adaptable operators who can sense and understand developments in warfare and minimize the confusion of the battlefield. As always in warfare, the victory is dependent upon the soldier as well as his equipment. Hopefully, the professional development of regional air-defense forces will continue to keep pace with equipment improvements.

DB Des Roches is an associate professor at the National Defense University’s Near East South Asia Center for Strategic Studies. His remarks do not reflect the views of any U.S. government agency or body.