What are the implications of the passing of Kuwait’s emir, Sheikh Sabah? 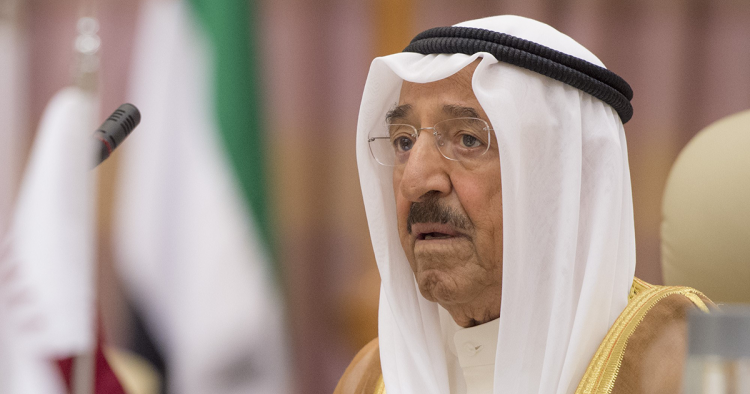 With the announcement that Kuwait’s long-time ruler, Sheikh Sabah al-Ahmad al-Sabah, had passed away, on Sept. 29, at the age of 91, the Gulf states lost their second senior statesman of 2020 following the death of Sultan Qaboos of Oman at the beginning of the year. Like Qaboos, Sheikh Sabah played an outsized role within the Gulf Cooperation Council (GCC) as well as in regional and international affairs. Kuwait’s crown prince, Sheikh Nawaf al-Ahmad al-Sabah, 83 years old, has been sworn in as the new emir this week. His age and his ascension, which breaks a long-standing tradition within the ruling al-Sabah of alternating between the al-Jaber and al-Selim branches of the family, will spark debate over the selection of the next crown prince.

The leadership transition, not unanticipated, comes at a moment when Kuwait, like its neighbors and, indeed, the world, is struggling with the fallout of the COVID-19 pandemic. Ninety percent of Kuwait’s foreign exchange earnings come from the sale of oil, which is struggling to break out of a narrow price band of approximately $40/barrel, straining Kuwait’s budget. Reports from earlier in the year found that nearly half of businesses in Kuwait had closed their doors because of the pandemic, while another quarter suffered revenue falls of over 80 percent. The economic impact was exacerbated by low levels of government support to the private sector compared to the rest of the Gulf region as well as the rise of nativist resentment of guest workers accused of being the vectors for the spread of the coronavirus. These issues are likely to keep the domestic scene roiling as the country moves closer to parliamentary elections scheduled for later in 2020.

But Sheikh Sabah’s passing will be felt most significantly in the area of foreign policy, which he has dominated for nearly the entirety of Kuwait’s independence as a state. Prior to his elevation as emir, Sheikh Sabah served as Kuwaiti foreign minister since 1963. Like Sultan Qaboos, Sheikh Sabah will be remembered as a Gulf leader who steered his country along a moderate course in regional and global affairs, emphasizing the peaceful resolution of disputes. Notably, that emphasis included Sheikh Sabah’s careful oversight of a process of normalization with Iraq following the first Gulf War beginning with the resumption of diplomatic relations in 2004. Sheikh Sabah’s emphasis on reconciliation with Iraq extended to the Kuwaiti decision to suspend Iraqi reparations payments in 2014, allowing Baghdad to absorb the economic fallout from its struggle with ISIS. Those payments have only recently been resumed.

Sheikh Sabah has also been a key voice in efforts to guide his fellow GCC leaders on a constructive approach to addressing their challenges, both internal and external. He was entrusted by the GCC leadership to engage Iran on their behalf to assess possibilities for reducing cross-Gulf tensions. Repeatedly, Sheikh Sabah has served as mediator and peace-maker within the GCC to resolve conflict among the member states. In 2014, he was successful, working closely with the Obama administration, in bringing Qatar back into the GCC fold. Nevertheless, differences among the GCC member states were not resolved, erupting again in 2017 with the announcement by Saudi Arabia, the UAE, and Bahrain of a full economic and political boycott of Qatar, hobbling the organization at a time of maximum tension in the Gulf region. Although the emir was again called on to use his good offices to resolve the intra-GCC tension, his last diplomatic mission has come to an end without reaching fruition. It will fall to others, perhaps Sheikh Nawaf or Omani Sultan Haitham, to pick up Sheikh Sabah’s baton.

The issue of normalization

Sheikh Sabah’s death also raises the question again whether Kuwait will join the UAE and Bahrain in normalizing relations with Israel. Despite Kuwait’s understandable fury over Yasser Arafat’s support for the Iraqi invasion of Kuwait in 1990, Kuwait remained a staunch supporter of Palestinian rights and the two-state solution. As long as Sheikh Sabah was alive, the Kuwaiti position in support of the Arab Peace Initiative linking normalization with Israel to a peaceful resolution of the Israeli-Palestinian conflict, was unchanged. Indeed, Kuwait has not been mentioned as a potential target in the Trump administration’s efforts to push normalization in advance of the U.S. presidential election. Notwithstanding the change in leadership in Kuwait, it appears still unlikely that the Kuwaitis will alter their stance on normalization.

Despite differences in perspective on elements of the regional situation, especially prior to the Iraqi invasion of Kuwait, Sheikh Sabah remained a staunch partner of the U.S. in later years and the two countries worked closely together on issues of regional security and stability, GCC cooperation, and energy security. All signs are that these essential pillars of Kuwaiti foreign policy that Sheikh Sabah established in his over half-century of leadership will continue to guide Kuwait into the future.