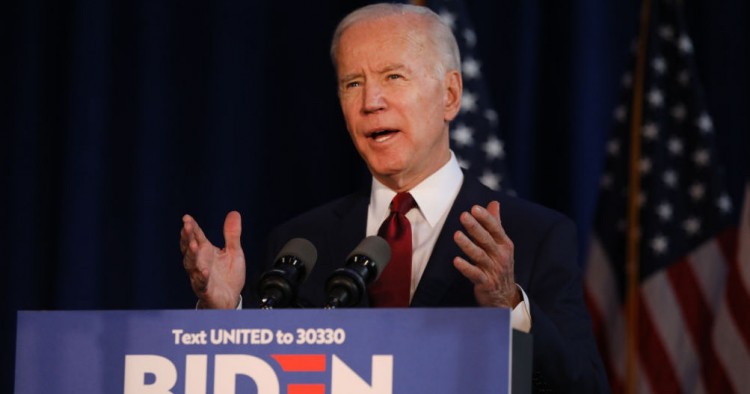 If elected, Joe Biden and his administration will face a wide range of foreign policy challenges. Possibly none will be more vexing than what to do about the clerical regime in Iran. Biden’s statements over the last year indicate the former vice president would likely re-enter the Joint Comprehensive Plan of Action (JCPOA), which President Donald Trump abrogated and replaced with a “maximum pressure” campaign aimed at forcing Tehran back to the negotiating table. Biden has also said that he will work with U.S. allies in Europe to extend the deal’s nuclear constraints and push back more effectively “against Tehran’s other malign behavior in the region.” The devil will be in the details. It can be argued that both the Obama-Biden JCPOA and the Trump “maximum pressure” campaign swung too far in opposite directions — one largely appeasing Iran to solve the nuclear problem and the other risking an escalatory conflict to the point of war with no diplomatic off-ramp. Both approaches were flawed and based on faulty assumptions. At least some of Obama’s advisers believed the signing of the JCPOA would not only limit Tehran’s nuclear program but also lead to improved relations, while the Trump administration assessed that its economic sanctions would either force Tehran to negotiate or lead to the ouster of the regime.

A possible Biden administration must learn the lessons from both policies and find a balanced, eyes-wide-open approach, while realizing that the region has changed much in the last decade. U.S. credibility in the Middle East is now at an all-time low. This is not just because of Trump’s inconsistent responses to Iranian provocations in the Gulf and his attempt to hastily withdraw from Syria, which left our Kurdish allies vulnerable, but also because the Obama-Biden administration beat a hasty retreat out of Iraq and failed to follow through on threats to punish Syrian President Bashar al-Assad for his use of chemical weapons. The Obama-Biden administration also only offered half-hearted measures to assist the moderate opposition in Syria, which left the field to hardline al-Qaeda-aligned militias, eventually creating conditions for the emergence of ISIS and thereby inviting Russia and Iran to play an outsize role. These actions have led regional partners to conclude that the United States is a less than reliable partner more interested in scoring domestic political points and following through on unrealistic campaign promises to bring the troops home than in protecting our national interests in the Middle East and standing by our partners in times of unprecedented regional turmoil.

The JCPOA and “maximum pressure”

The JCPOA proffered that by easing sanctions on Iran it would halt its nuclear program, which it largely did, but it did not address Iran’s destabilizing regional activity, its ballistic missile program, and attacks on U.S. allies and their interests, usually through proxies. Most importantly for our Gulf partners, the agreement failed to address the elephant in the room — Iran’s malign activity. True believers in the JCPOA thought that once sanctions were lifted, the clerics would curtail their malign activity so as not to jeopardize sanctions relief and the resultant improved economic conditions. In fact, the Iranian regime did the opposite. Iran took off the gloves in Yemen, sending advisors and advanced weapons, including ballistic missiles and armed UAVs, to their Houthi client, enabling them to ratchet up the conflict with deep strikes into Saudi Arabia. Tehran also stepped up its involvement in the Syrian civil war, with its proxies in Iraq, its provision of advanced weapons to Lebanese Hezbollah, and threats to Israel along the Syrian-Israeli border.

By contrast the Trump administration has pursued its campaign of “maximum pressure” with tenacity, essentially offering Tehran no viable course of action other than escalation and conflict, or capitulation. Former Secretary of Defense James Mattis had urged the administration not to abandon the JCPOA but rather to seek to revise it to address its noteworthy deficiencies: Iran’s destabilizing regional posture and its increasingly accurate and long-range missiles. He lost this battle to former National Security Advisor John Bolton and others in the administration who appeared principally interested in regime change. As appealing as regime change might seem, it underestimates the regime’s iron grip on its own population and its willingness to use almost any means to suppress opposition. While the Obama-Biden administration had rose-colored glasses, Trump clearly didn’t and discarded his glasses and a nuanced understanding altogether. Neither approach has resulted in regional stability.

So what is needed is a policy that resuscitates the JCPOA but enhances it to address the three noted deficiencies: Iran’s destabilizing regional activity, its ballistic missiles, and the sunset clauses that lift restrictions on Iran's nuclear enrichment program after 2025. To bring Iran back to the negotiating table we will no doubt have to offer some real sanctions relief. This might equate to 20 percent of the sanctions piled on by Trump. For its part, Tehran will demand the ability to sell its oil on the world market without restriction.

While the Obama-Biden administration’s regional policies failed, some of Biden’s senior foreign policy advisors, including Tony Blinken, Jake Sullivan, and others, seem grounded on Iran and the Gulf, which is encouraging. Some of these advisors have recently stated that a Biden administration would not support rolling back Iran sanctions or reinstating the JCPOA without major modifications. So while at times Biden’s campaign rhetoric on Iran and Saudi Arabia seems more tied to domestic politics than our national interests, his advisors seem to see the leaders of the Iranian regime as who they are, not as who we hope they will become. It will also be critical to consult with our long-term regional Gulf allies, which was not done with the JCPOA, and most of them felt sold out as a result. What we can most hope and ask for in a Biden administration’s Iran and Gulf policy is a willingness to learn from past mistakes and strike a balance between our interests and values — not a policy that is ideologically driven, but rather one that is centered on maintaining and leveraging our long-standing relationships and alliances in the region.

Joseph Rank is a retired brigadier general in the U.S. Army, former acting deputy assistant secretary of defense for Middle East policy (2017-18), a non-resident scholar with MEI's Defense and Security Program, and the chief executive of Lockheed Martin Saudi Arabia.

Richard Baffa is the deputy director/director of analysis at Circinus-UAE, a defense company providing open source analysis in the UAE to multiple organizations. He was previously a senior international/defense policy researcher at RAND and served in a variety of positions at the Defense Intelligence Agency. The views expressed in this piece are their own.