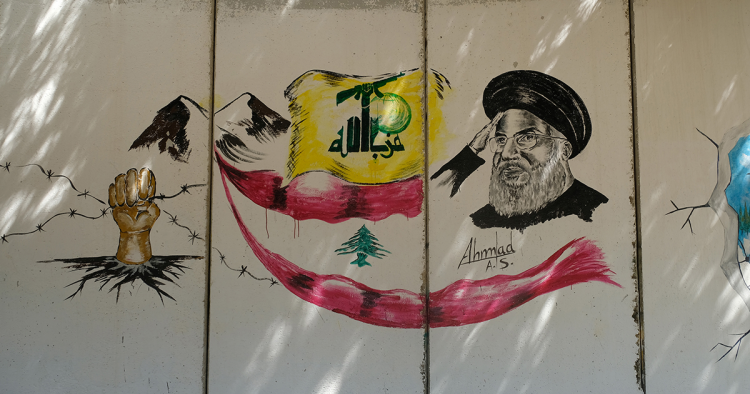 Despite fresh comments from Hezbollah’s leader Hassan Nasrallah that Joe Biden’s victory in the U.S. elections would not dramatically alter America’s pro-Israeli foreign policy in the Middle East, Hezbollah appears largely optimistic of its future under the new administration. The Party of God seems wary of the next few months, however, until President Donald Trump leaves the White House in January. While Hezbollah will certainly benefit from a reboot in diplomatic relations between the U.S and Iran, which could translate into much-needed liquidity for the organization and a strengthening of its internal position, it still faces numerous domestic challenges that money alone cannot solve.

In Dahieh, the party’s stronghold in the southern suburbs of Beirut, Hezbollah supporters and militants alike appeared to rejoice at the news of Biden’s election. “People believe that Biden will be more lenient on Iran and will go back to making a deal with Tehran, which will be consequently good for Hezbollah. Less sanctions on Iran and Hezbollah will mean more money for the group, which in turn will be able to reinstate services and aid it had to cut in the last few years because of Trump’s ‘maximum pressure’ policy,” adds a source close to Hezbollah commanders who spoke to the author. Trump’s policy has seriously hindered Hezbollah’s money laundering activity, severely cut Tehran’s yearly $700 million allocation to the group, and shut down Lebanese banks that dealt with the organization, while also designating the group’s political allies for abusing their government position.

Similarly, Nasrallah seemed to celebrate U.S. President Trump’s loss, describing it as “the humiliating downfall” and his administration as “among the worst, if not the worst.”

Hezbollah’s media has adopted a tone of cautious optimism. In one article in Al-Akhbar, Hezbollah’s mouthpiece, titled “Cautious optimism in Iran,” the author explains that Biden will be a more reliable negotiator than Trump given his contrarian relationship with Saudi Arabia and Israel, Iran’s nemesis. However, another article in the same paper warns that the new Biden team will include “hawkish” figures from the Obama administration, namely Susan Rice and Tony Blinken. Susan Rice is a former U.N. ambassador and Obama national security adviser, while Tony Blinken is a former deputy secretary of State, deputy national security adviser, and a longtime Biden adviser.

What appears to worry Hezbollah the most is the transition period. In another article from Al-Akhbar, titled “Two uncertain months,” the author warns of an American attack against Iran. Recent reporting by The New York Times suggests President Trump has considered the idea. This is a theory that sources close to Hezbollah say is possible, given that Biden’s win has emboldened the group. They are now more likely to respond to any new Israeli attacks, given Biden’s less sympathetic position toward Israel, but Trump still holds power until January.

Generally speaking, Hezbollah experts close to the organization are bullish about its prospects under the new administration.

“Biden’s victory benefits Iran and Hezbollah,” says Kassem Kassir, an expert on Hezbollah who is close to the party. “A Trump victory would have been catastrophic and would have translated into military escalation and possibly into a (Middle East) war,” he adds.

For Brahim Beyram, a Lebanese journalist and analyst close to the group, Biden will definitely come back to the Joint Comprehensive Plan of Action (JCPOA), as the Iran nuclear deal is officially known. “This opens a new horizon for Hezbollah and Iran, because any new negotiations will result in relieved pressure on Hezbollah,” he explains.

Engineered by the Obama administration, the JCPOA was a deal reached by the P5+1 — the U.S., Russia, China, France, Germany, and the U.K. — in 2015 that aimed at curtailing Iran’s nuclear activity. In May 2018, President Trump announced that the United States would withdraw from the JCPOA and reinstate U.S. nuclear sanctions on Tehran. Biden has stated that he would end Trump’s “maximum pressure” policy against Tehran and re-enter the JCPOA. A revisited deal with Iran would allow it to sell oil on international markets, and Iranian dollars would eventually trickle down into Hezbollah’s hands. Currently, the organization is strained for cash because of U.S sanctions and Lebanon’s disastrous financial situation, making this a very welcome change.

The group has been hard hit by the economic crisis in Lebanon, which has gone from bad to worse over the course of 2020. In March, the country defaulted on its debt of $90 billion. Since then, currency devaluation has disproportionally affected the poor and middle class, and over half of the population is now under the poverty line. Moreover, since October 2019 a large protest movement has denounced political parties, including Hezbollah and its closest allies.

A new deal with Iran and relief from sanctions would mean a boon for Hezbollah. An improvement in Iran’s financial situation, even minute, would provide it with a big advantage compared to its political rivals, whose economic means have shrunk due to the state’s bankruptcy. This economic trouble also reflects on their limited ability to maintain a base, as people are disenchanted by years of mismanagement and corruption. In the short term, Biden’s victory emboldens Hezbollah politically and will make it less willing to compromise on forming a new government, especially when it comes to its allies’ demands for certain ministries. Sanctions imposed by President Trump on Hezbollah’s ally, former Minister of Foreign Affairs Gebran Bassil, will only make the organization more receptive to his demands for certain ministries.

However, Biden’s election may conversely give Hezbollah a false sense of confidence. Any return to the negotiation table with Iran will take time and may not result in the removal of sanctions, given that this issue has garnered bipartisan support in the U.S. Additionally, Lebanon has also been affected by sanctions under the Caesar Act, which mainly targets the Assad regime in neighboring Syria, but also indirectly impacts its Lebanese partners, who are often close business associates of Hezbollah and its political allies. As such, sanctions independent of Iran will continue to further choke the organization and its cronies financially.

At the national level, Hezbollah faces another set of obstacles that money alone cannot solve. The party has largely been discredited due to multiple governance scandals since it and its allies won a comfortable majority in the Lebanese Parliament. In the last three years, the country has gone broke and corruption scandals have multiplied, focusing on the party’s two main allies, Bassil and Speaker of Parliament Nabih Berri. The organization is now perceived as the guardian of a deeply corrupt political system, which has been denounced by a large portion of the Lebanese population in what was dubbed the October revolution in late 2019. Furthermore, wealthy members of the party’s base who had deposited millions in the banking sector have now lost their savings due to the country’s financial meltdown, which resulted from banks’ exposure to the bankruptcy of the state. Moreover, Hezbollah’s raison d’être, the war against Israel, appears to be more and more a thing of the past, as the movement has failed to engage in a conflict with its southern neighbor for nearly 15 years and has avoided responding to hundreds of attacks in Syria and Lebanon, despite numerous threats. Together with Arab normalization with Israel and Gulf countries’ efforts to capitalize economically on fresh ties with Tel Aviv, this is slowly making Hezbollah’s supposed fight against the “Zionist enemy” irrelevant.

While a Biden presidency and the return of support for the JCPOA might appear like a godsend for Hezbollah, this is not 2015. Lebanon and its people are not in the same situation, nor is Hezbollah, or even the region. Five years have passed and a lot has changed — and not necessarily in the party’s favor.

Mona Alami is a French Lebanese journalist who writes about political and economic issues in the Arab world. The views expressed in this piece are her own.