What can Turkey's left learn from Europe? 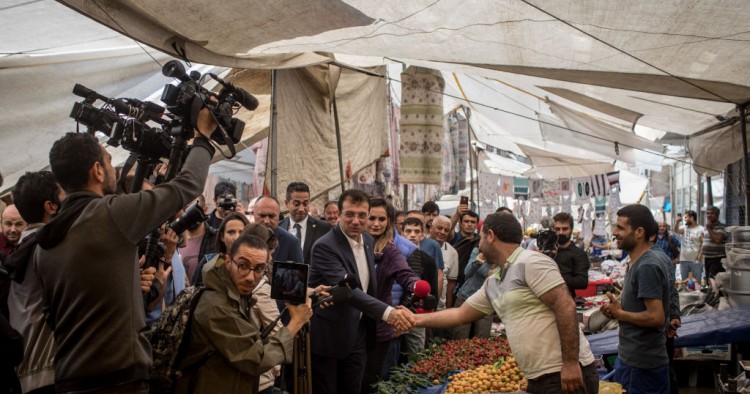 European Parliament elections were seen as a test of strength for the far-right populism that has been enjoying a surge for the past few years throughout the continent. The populists increased their share of seats in the European Parliament, the only European Union legislative bodies whose members are directly elected by EU citizens, but it was not exactly a sweep. The center left and the center right lost their absolute majorities for the first time since the very first European Parliament elections back in 1979. The European center left’s poor showing in the elections might teach a thing or two to Turkey’s main opposition, the center-left People’s Republican Party (CHP).

The CHP has been in an uphill battle against Turkey’s right-wing populist President Recep Tayyip Erdogan. Like his European counterparts, Erdogan has blended economic and cultural resentment to expand his power. His Justice and Development Party (AKP) swept to power with 34 percent of the vote in 2002 shortly after a devastating financial crisis.  The newly established AKP was a breath of fresh air to Turkish voters who had had enough of the fighting among the country’s old political elite. The anti-elite sentiment which is central to populist parties across Europe was loud and clear in Turkey’s 2002 parliamentary elections. All other center-left and center-right parties, except for the CHP, were left out of the new parliament. Erdogan, who was banned from politics at the time for reciting a poem with religious imagery, became the perfect anti-elite crusader. He represented the country’s “Black Turks,” the long-ignored, largely rural underclass that Turkey’s secular elite scorned. He frequently speaks about growing up in a working-class neighborhood and becoming a second-class citizen due to his piety in once-secularist Turkey, contrasting it with the supposedly privileged lives of coastal secular Turks. Like other populists in Europe, Erdogan became the voice of the working class by linking socioeconomic frustration to cultural concerns.

Erdogan’s success in appealing to working-class voters does not just lie in his charisma but also in the putatively social democratic CHP’s failure to prioritize social democratic issues since its inception. The CHP was the founding party of modern Turkey, and it ruled a single-party regime from 1923 to 1946. Due to its status as the founding party and the number of state officials in its cadres, the party became synonymous with the state and attracted the support of the elite rather than the people. The radical secularization and Westernization reforms enacted during this period further alienated the masses who remained deeply pious. The CHP’s policies were based on identity rather than social and economic issues. The party consigned itself to protecting the nation-state instead of fighting for the rights of the working people. Its policies were marked by its attempts to deny any religious visibility in the public realm and nationalist policies aimed to curb Kurdish demands. Except for a brief period in the 1970s, the party remained aloof to social policies, the welfare state and income redistribution, which in Western European countries has been the main source of legitimacy for social democratic parties. Right-wing parties stepped in to fill the void.

The Welfare Party, the Islamist faction that preceded the ruling AKP, was particularly successful in appealing to low-income voters by linking economic frustrations to cultural concerns. The economic liberalization of the 1980s had transformed the country’s economy and society. The urban poor, low-wage earners and the pensioners had become the losers of the new economic order. The proliferation of private media in the 1990s and rapid globalization and liberalization dislocated the traditional values and deepened the sense of cultural and economic insecurity among the large conservative segments of society.  The Welfare Party capitalized on these insecurities. The party’s narrative focused on the dispossessed, the economically marginalized as well as the pious Muslims who had been turned into an underclass by the country’s secular elite. It pledged to bring social justice by confronting what they saw as the morally corrupt capitalism. It promoted the establishment of an Islamic common market as well as multi-ownership companies and heavy industries under state-led development strategies. These ideas were particularly appealing to the urban poor.

While the CHP failed to devise new social and economic policies and became a party of the upper middle class, the Welfare Party’s successor, the AKP, gained further ground among the country’s poor by capitalizing on the twin economic crises of 1999 and 2001. While maintaining fiscal discipline dictated by IMF-led economic liberalization, the AKP still managed to adopt an anti-establishment image by molding religious populism with neoliberal economic reforms.  It proved to be a winning formula.

But today, as the economic tide is turning, Erdogan is losing hold over poor segments of society, particularly in big cities. In the last local elections, in March, the AKP lost almost all major cities, including Istanbul, the country’s economic powerhouse. CHP candidate Ekrem Imamoglu won Istanbul’s mayorship, and the party did particularly well in the city’s poorest districts. On Erdogan’s orders, however, the electoral board annulled the vote and ordered a rerun on June 23. This could be a pivotal moment for the CHP to reinvent itself and Europe can provide valuable lessons.

What can the CHP Learn from the European Experience?

After the Second World War, European left embarked on a democratic fight for the rights of the working class. Parties of the left played a crucial role in the construction of European welfare regimes by building universal, state-run welfare systems. These parties relied on working-class electorates who were defined by a strong sense of class consciousness. Yet globalization and the rise of a new neoliberal economic consensus rapidly challenged the traditional left. With the advent of a new kind of working class, mostly made up of unskilled service workers with short-term or part-time jobs, and an increase in cross-border flows of goods, services and people, the left has become increasingly out of touch with its historic working-class constituency. The workers’ unions, party-associated organizations and social clubs that once defined working-class subculture and strengthened the political and social bond within the working class are no longer in place.

The new working class is composed of atomized individuals difficult to organize and fragmented by different ethnic and religious identities. Increased cross-border flows have dislocated both domestic goods and laborers. Anxiety about immigration in particular, adopted by right wing parties as a major campaigning platform, has radically altered the norms of political debate. As populist right-wing parties took the flag of protecting the working class, the progressive left found itself increasingly defending multiculturalism, minority rights and oppressed identity groups. As a result, the left abandoned the working class and became a party of the upper middle class, allowing the new working class to fall toward the populist radical right.

Right-wing populism thrives on economic and cultural resentment of voters who feel “left behind” and threatened by immigration. Populist leaders exploit people’s fear that their culture is under attack and their frustration over economic inequality. By linking socioeconomic frustrations to cultural concerns, the populist right has become the voice of the new working class.

The recent European elections are the latest wake up call to the left. If it wants to counter rising radical right wing populism, it has to shift its agenda from questions of identity to politics centered on creating broad economic equality. Turkey’s left should draw a lesson from the European experience. Instead of fighting the cultural war against Islamists and Kurds, it should connect with the country’s “left behind” and adopt an agenda focused on addressing the country’s economic woes. The Party has recently taken steps in that direction.

Opposing the public visibility of religion and Kurdish demands for greater rights and autonomy have been the two main pillars of the CHP’s cultural agenda. But, in last year’s presidential election, the CHP fielded a candidate, Muharrem Ince, who often spoke about his religious upbringing and declared he had no problems with women wearing headscarves in universities and public institutions. The Party’s Istanbul mayor,  Ekrem Imamoglu, has been touted as a new generation of the CHP, someone who can recite the Quran during a campaign visit to a mosque and reach out the secular liberals and conservative Turks alike. The CHP even formed an alliance with the Felicity Party, an Islamist party with even stronger religious credentials than the ruling AKP, to rival Erdogan in last year’s presidential and parliamentary elections, a move that would have been rejected in the past by the party’s secularist base. The CHP has come a long way in coming to terms with the country’s conservative majority.

Moderation on the Kurdish question might prove to be more problematic. The CHP has recently made overtures to Kurdish groups to curry support from Kurdish voters. The chairman of the CHP recently said that legislation must be prepared for the Kurdish language to be officially recognized. But the party has a dominant Turkish nationalist wing that has opposed many Kurdish concessions. The pro-Kurdish, left-wing Peoples’ Democratic Party (HDP) was excluded from the alliance forged by the CHP in order not to alienate the party’s nationalist base. But getting Kurdish support remains the key for the CHP to move beyond identity politics and reinvent itself as a true left-wing party that prioritizes social and economic policies.

The CHP’s new Istanbul mayor has been doing just that. In the run-up to March’s local elections, he tried to appeal to all voters—Turkish and Kurdish, pious and secular. He focused his campaign on addressing the city’s pressing problems such as wasteful spending, transportation and infrastructure. During his brief time as the mayor of Istanbul, he cut water utility charges and reduced public transportation for students. Imamoglu says if the city is managed well, it could contribute to lifting the troubled national economy. He spends most of his time in the poorest neighborhoods, strolling through local markets and talking to street vendors and shopkeepers. His mild-mannered temperament and his ability to connect with voters have won over voters in low-income neighborhoods.

Meanwhile, the Turkish economy is officially in recession. Unemployment is high. Food prices have spiked nearly 30 percent. President Erdogan has not offered a viable solution to the country’s growing economic problems. Instead, he blames “foreign outside powers.” This is a perfect time for the CHP to recapture the hearts and minds of the country’s working class. The fall of the European center-left should tell the CHP that left’s preoccupation with identity has diverted attention from the serious problems of lower classes and strengthened radical right-wing populism. To fight back against that, the left has to reconnect with lower classes and tackle the question of socioeconomic inequality.