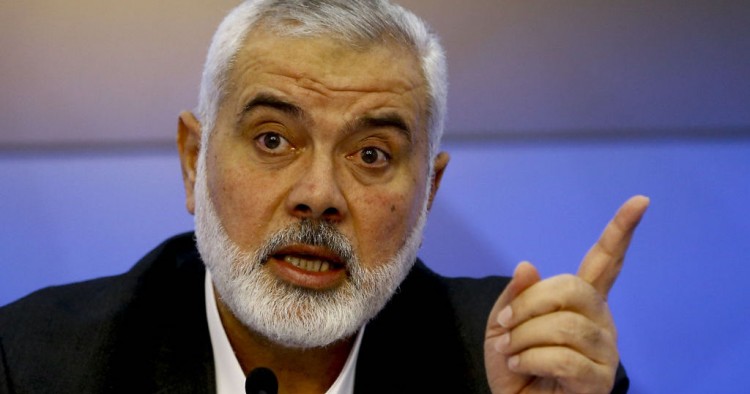 When President Vladimir Putin became Russia’s leader just over two decades ago, Moscow was not a major player in the Arab world. U.S. hegemony in the Middle East and North Africa (MENA) was strong and no major power posed a credible threat to Washington’s geopolitical position. Yet since September 2015, when Russia intensified its direct military intervention in the Syrian crisis, regional perceptions have changed and many state and non-state actors now recognize the reality of Russian power in their region. While much of the focus on Russia’s foreign policy toward the MENA region is on Syria and Libya, the dire situation in Gaza is another area where Moscow seeks to play a growing role.

From Putin’s perspective, Moscow must involve itself in the Palestinian cause in order to further facilitate Russia’s “return” to the region. In practice, this has entailed Moscow and Hamas improving their relations, underscored by numerous visits and communications between high-ranking Russian government officials and Hamas representatives in recent years.

Although Putin’s government maintains close relations with Israel, Moscow and Tel Aviv have never seen eye-to-eye on Palestinian-related issues. Russia’s rapprochement with Hamas has irked Israel and the U.S., both of which accuse the Kremlin of legitimizing a “terrorist” organization. This development has also upset the Palestinian Authority (PA), Hamas’ main Palestinian rival.

Yet Washington, Tel Aviv, and Ramallah’s objections have not stopped Russia from engaging in greater dialogue with Hamas, which Moscow does not recognize as a terrorist group. Instead, the Russian government believes that Hamas must be recognized as an influential Palestinian faction with a critical role to play in the Palestinian cause. In fact, Russian officials have been receiving the group’s leaders in Moscow ever since March 2006, shortly after the Palestinian parliamentary elections that Hamas won.

But in 2006, the context was different as Russia was a far less influential player in the MENA region. Today, however, Moscow is challenging Washington’s traditional role as a “mediator” (albeit an extremely imbalanced one) between Israelis and Palestinians. The Russian response to the Trump administration’s outlandish “deal of the century” has highlighted this point. As the Chairman of the State Duma Committee on International Affairs Leonid Slutsky said, the Trump-Kushner plan “is blatantly pro-Israeli and fails to take the interests of the Palestinian side into consideration.”

One reason why Russia is keen to improve its standing with Hamas is Moscow’s interest in pushing the Palestinian faction toward a renormalization of relations with the Syrian government, which were severed after the uprising broke out in 2011.

On March 4 it appeared that Russian efforts to facilitate a Damascus-Hamas rapprochement might prove successful. Ismail Haniyeh, the leader of Hamas, spoke at a press conference in Moscow and declared that Syria’s government and citizens had for years been major backers of his group. “We cannot forget this history. There is no policy or any decision by Hamas to engage in the Syrian issue, and I firmly deny the presence of any fighter or martyrs of Hamas in Idlib, or before the [events] of Idlib, or even in the Syrian revolution.”

Haniyeh issued this statement following a meeting with Moscow’s chief diplomat, Sergey Lavrov, and other Russian officials in which he explained that Hamas is ready to play a constructive role in terms of ending the Syrian crisis. Russia is likely to continue to attempt to ease any lingering tensions between the government in Damascus and Hamas, which sided with the Syrian Muslim Brotherhood and other rebel factions against the Assad regime early on in the crisis.

From Hamas’ perspective, a growing partnership with a major power like Russia, which sits on the UN Security Council and is playing an ever-greater role in the Middle East, can help counter Israeli and American efforts to isolate the Palestinian group. By virtue of Hamas’ growing contacts with Moscow, the faction aims to enhance its standing in the global arena and gain a growing number of state partners and sponsors, which already include the main players at the Islamic summit held in 2019 in Kuala Lumpur: Turkey, Iran, Qatar, and Malaysia.

Hamas is banking on the fact that growing Russian influence in the region will lead to improvements for Palestinians. It hopes that a Hamas-Russia rapprochement could prompt Putin to exert his leverage over Israeli Prime Minister Netanyahu to pressure Israel into lifting its blockade on Gaza. At a time when COVID-19 cases are being documented in the besieged coastal strip, Gaza’s health and humanitarian crises have the potential to seriously worsen in the days, weeks, and months ahead if the pandemic spreads throughout one of the world’s most densely populated areas.

How Gulf states enter the equation

Interestingly, there is a potential role for Gulf Cooperation Council (GCC) member states to play. The fact that Qatar, a state which prides itself on being “pro-Palestinian,” hosted a Russia-Hamas meeting in February underscores how Doha is helping facilitate Moscow’s rapprochement with Hamas, which continues to try to find new ways to undermine American and Israeli efforts to isolate the Palestinian faction.

In addition to Qatar, Kuwait is another GCC member that maintains good ties with Russia and has also used its diplomatic cards to defend the Palestinian cause in many international forums. Notably, in May 2018, Hamas praised Kuwait for preventing a Washington-sponsored UN Security Council draft resolution, which would have condemned Hamas for firing rockets at Israel from Gaza, from moving forward. The following month, Hamas’s spokesperson, Fawzi Barhoum, stated that “Kuwait's genuine stance in support of Palestine and the Palestinians in the Gaza Strip is something to be proud of” and that “we hope that other Arab states will follow Kuwait's lead in reconstructing the Gaza Strip and supporting the Palestinian people.”

If Moscow can pursue initiatives in tandem with the Gulf sheikdoms, Hamas would welcome such a development as beneficial for the group’s agenda, which is aimed at reducing Washington’s regional influence. Ultimately, within this context, Hamas has a favorable view of Russia’s “return” to the Middle East with Putin at the helm. Like many state and non-state actors in the Arab world that oppose American hegemony, Hamas sees Russia as a go-to power that can serve as an alternative to the U.S.

What remains to be seen is just how reliable Russia will prove to be, especially in the longer term. Also unclear is the extent to which Hamas could succeed in convincing Moscow to apply sufficient pressure on Netanyahu’s government so that Israel softens its policies — policies that have made Gaza a “big prison” where daily life has been difficult under a cruel, years-long siege. While it is clear that Russia and Hamas see much to gain from their rapprochement and continued dialogue, Moscow is not about to join Tehran in embracing an anti-Israel agenda. Instead, Putin will continue aiming for Moscow’s foreign policy to balance Russia between opposing sides in the MENA region while also being cautious about addressing issues that directly impact Israeli interests, such as Hamas in Gaza.

Giorgio Cafiero (@GiorgioCafiero) is the CEO of Gulf State Analytics. The views expressed in this article are his own.