What Does Trump’s Visit to Saudi Arabia Mean for Russia? 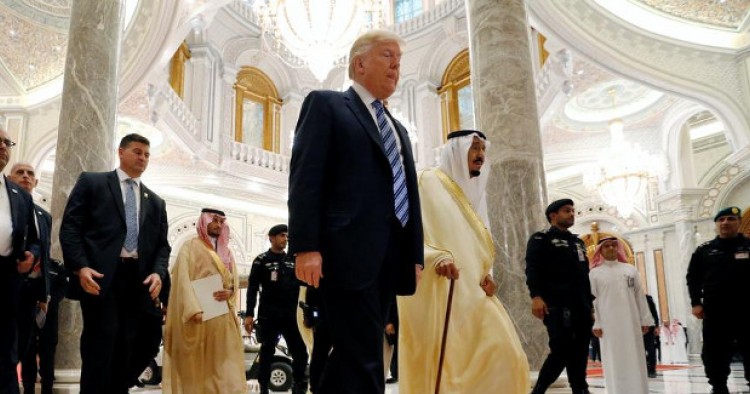 On May 20, President Donald Trump landed in Riyadh for the first stop of his nine-day Middle East and European tour. Many hoped that the president’s long-awaited trip would clarify his administration’s approach to the Middle East. As expected, the most important developments involved a $110 billion arms deal, anti-Iranian rhetoric and plans to establish an “Arab NATO.”

As another major player in the Middle East, Russia has a constant interest in U.S. activity in the region. Moscow understands that the Trump administration’s policies are still developing, and carefully watched his Middle East tour.

Russia’s most pressing concern is determining what the American and Saudi policies toward Syria and Iran will be. For now, it seems that the United States wants to allay Saudi Arabia’s concerns about Iran’s regional ambitions. The historic arms deal sends a clear message of support and could enhance Saudi military capacity and their role in the region while scaling back direct U.S. involvement. Washington, it seems, hopes a Saudi-led security alliance will be able to confront most major security issues in the Middle East. This might well make Saudi Arabia more predictable and manageable in its moves in the region.

Such an approach has dubious consequences for Russia. It mirrors their own approach to the region: creating a network of partners in the Middle East that will help ensure Russian interests and address regional issues without significant or direct Russian involvement. Successful execution of this strategy is essential to the future of Russian Middle East policy, as it cannot afford—economically or politically—to increase its involvement in the region indefinitely. Although Russia cannot likely build a better system of regional proxies than the United States, it will continue to try.

One of Moscow’s primary goals is to counterbalance Saudi influence in the region. To do so, it is building its own coalition, supporting Iran in particular, and trying to foster constructive relations with Turkey. However, its support of Iran must be tempered: Russia needs a strong enough Iran to keep the regional balance of power in its favor, but it also needs a strong enough Saudi Arabia to keep Iran in check. For this reason, after the U.S.-Saudi arms deal, Russia will likely increase its military support for Iran.

During his ‘Islam speech’ in Riyadh on May 21, Trump depicted Iran as the main culprit in the rise of terrorism, and the spread of instability in the Middle East. Trump mentioned Iran 11 times in the context of security threats, while only mentioning ISIS five times and al-Qaeda three times. Moreover, Trump equated groups like Hezbollah and Hamas—who receive material support from Iran—to ISIS and al-Qaeda. This made it quite clear that the Trump administration sees Iran as the region’s main challenge, a view that could contribute to the continuation of sectarian confrontation in the Middle East.

The Trump administration should rethink its extreme stance. Villainizing Iran and leaning too heavily on the Sunni camp might further alienate Iran from the West, and catalyze an even stronger Russian-Iranian relationship. This is especially salient given that Iran re-elected moderate President Hassan Rouhani, who constantly reaffirms his openness to further negotiations with the United States.

With anti-Iranian rhetoric again on the rise, Tehran will need to protect its interest through closer cooperation with Moscow. Additionally, Russia might see this as an opportunity to possess greater leverage over Iran, and bring the Islamic Republic closer to Russia’s position in Syria.

By signing a massive arms deal with Saudi Arabia, the United States effectively eliminated Russia’s chances to enter the Saudi arms market in particular, and the G.C.C. arms market in general. Previously, there had been reports that the Saudis were interested in purchasing a wide range of the most advanced Russian weapons. After the U.S.-Saudi arms deal, however, a future Saudi-Russian deal seems unlikely. As a result, Russia might double down on its efforts to provide arms to its existing partners in the Middle East, including Iran, Egypt, Algeria, and Libya.

Increased Russian arms sales to Iran would almost certainly disturb Israel and the Gulf states, despite Trump’s recent assurances in Riyadh. However, further arms deals with Iran might prove problematic for Russia. According to the J.C.P.O.A., any arms sale to Iran requires the approval of the U.N. Security Council. In this scenario, the United States could use its veto power unless Moscow and Washington find a compromise. As a result, Russia will likely seek an agreement with the United States that ensures their ability to trade with Iran, while also agreeing to maintain equilibrium in the region.

One other important moment from Trump’s speech stands out. He mentioned Russia along with China, the United States, Europe, Africa, and Australia as nations and regions that had become victims of terrorism. This confirms that the new U.S. administration views Russia as part of international community that has suffered from terrorism, and as a country with which cooperation is possible.

Trump’s Middle East policy, and broader foreign policy in general, is still very malleable. So far, Trump has given Russia a few key messages: that the United States has returned to its policy of unwavering support to the Saudi-led Sunni coalition; its main task is to fight terrorism; and the United States and the coalition together plan to check Iranian expansion and aggression. While none of these messages present definitely beneficial scenarios for Russia, this added clarity means Moscow now knows what it’s dealing with.

A view from the Hill: Congressional action targeting the MENA region, July-September 2021