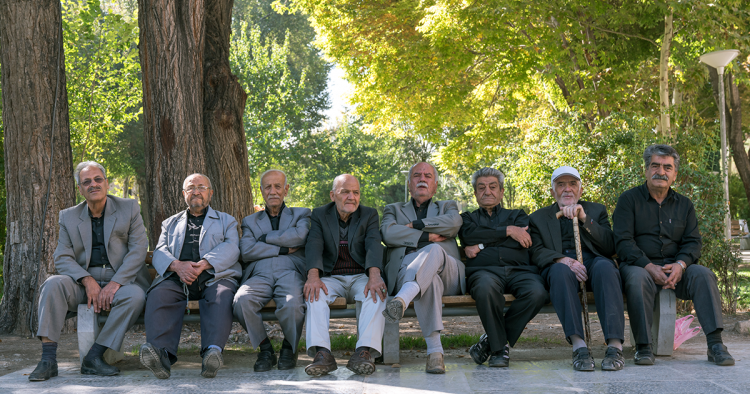 Officials in the Islamic Republic of Iran have been warning about an emerging demographic “tsunami” as local and international forecasts suggest the country could have one of the five largest elderly populations by 2050. Nearly 11% of Iranians — about 5.3 million out of the current total population of 84 million — are now over 60 years old; however, this figure could significantly increase going forward. According to a forecast by the United Nations Development Program (UNDP), Iran’s elderly population will make up over 30% of the total by 2050, making the Islamic Republic home to the largest elderly population in the Middle East. According to the same forecasts, the elderly population in Iran’s major regional rival, Saudi Arabia, is predicted to reach 25% of the total by 2050 and just 10.6% in neighboring Iraq.

The aging of populations is an international phenomenon — according to the World Health Organization, by 2030 one in six people globally will be over 60 — but demographic experts like Saleh Ghasemi say that Iran is among the fastest-aging countries in the world. It will transition from a young population to an old population in just three decades, compared to other countries like Italy (61 years), Sweden (85 years), and France (115 years). Officials say that if current demographic trends continue for the next 15 to 20 years, Iran will have the lowest fertility rate in the Middle East.

Iran’s population policy has undergone drastic changes over the past four decades. Following the Islamic Revolution in 1979, the country witnessed a baby boom during the Iran-Iraq War from 1980 to 1988. Over these eight years, authorities urged the nation to raise a “20-million-man army” to sustain the country’s military forces. In 1986, the country’s fertility rate reached its highest point of over 6.5 children per woman.

But the war-torn Iran struggled to rebuild its economy in the years that followed, and the Iranian authorities soon faced the challenge of dealing with an increasingly young population that the state did not have the resources, time, or capacity to support. Hence, the state family planning policy changed in 1988, this time promoting the “Fewer Kids, Better Lives” campaign. Under the new policy, two children became the ideal family size. Iranian families welcomed the new trend, making it one of the most successful family planning programs worldwide. It brought the country’s fertility rate down from the peak of over 6.5 children per woman in 1986 to below 2.5 children per woman by 2010.

Despite its success at the time, the consequences of such a rapid slowdown for the country’s demographics became abundantly clear in the following years. After the 2011 census, the threat of an aging population became a growing focus for the Iranian authorities. Supreme Leader Ayatollah Ali Khamenei has expressed his deep concerns about the issue more than 40 times since then, at one point publicly calling the previous family planning policy a “mistake” and describing it as the “West’s hostile policy” against Muslim countries.

In 2012, Iran reversed its population policy once again to hedge against the risk of an aging population, tasking all major governmental and nongovernmental bodies with “preventing the decrease in the fertility rate and improving it in accordance with Islamic teachings.” The government kickstarted a series of measures and campaigns to encourage Iranians to get married and have more children, including providing free hospital delivery stays and modifying national laws to allow women to have longer maternity leaves.

The government also reversed past policies meant to control population growth by canceling subsidies for condoms and birth control pills and eliminating free vasectomies. Billboards of happy families were put up across major cities and Iran’s central bank even allocated a special budget for loans to be given to families with children.

Despite all these efforts, unlike previous instances, the state’s population policy has failed to sway the younger generation, even among the Islamic Republic’s natural supporters and religious families. In the previous Iranian calendar year of 1400, the population growth rate fell to 0.68%, down from 0.73% in the previous year, and it is expected to worsen in the coming years. According to population experts, this is an extremely worrying trend that raises the possibility of reaching a zero population growth rate in the coming decade if nothing changes.

Experts and government officials alike agree that the root causes of this phenomenon can be traced to several main factors: Worsening economic conditions, an increasing rate of emigration, changing lifestyles, and a lack of hope for a better future among the country’s young population, which strives for greater social and political freedom.

For an increasing number of young, middle-class Iranians who are deeply pessimistic about their country’s future, having children is not only one of the last things that crosses their minds, but it is also, in many cases, impossible given Iran’s current economic situation. Furthermore, some women suspect that the government’s policy aimed at increasing the birth rate is actually an effort to keep women in what hardline clerics believe is their place, the home.

Unmarried and childless at 44, Maryam told MEI that the thought of having children has never crossed her mind. “Ever since I can remember, we’ve been promised a better future, [we’ve been promised] hope. I’ve never experienced it,” she said. Adding that the young population has always faced all sorts of pressure, Maryam stressed that most of her friends have also opted to remain single, saying, “Our generation was just living day by day. We didn’t have hope in the future and we still don’t. I know it’s a hundred times harder for the newer generations. So, I don’t know who they’re [the government] trying to entice.”

The implications of an aging population

Up until a decade ago, Iran had one of the youngest populations in the world. However, the trend has changed and the country is currently moving through the intermediate stage of what the UNDP has termed the “age-structural transition,” in which an outsized majority of working-age adults is gradually turning into an increasingly large proportion of elderly dependents.

Population trends help determine state power dynamics and impact a country’s national security and economic growth. Iranian authorities, therefore, are naturally concerned about the issue of an aging population, especially at a time when Iran is trying to flex its muscles as a major regional power.

Tehran should have taken better advantage of its educated workforce and vast economic potential to improve its fiscal condition, for example by shoring up its already bankrupt pension funds. It should also have better prepared the country’s healthcare system to meet the needs of a larger elderly population in the coming years. However, Iran’s foreign policy, decades of U.S. and international sanctions, and widespread internal mismanagement and corruption have obstructed any efforts to make the most of its economic potential.

In October 2021, Iran's Population Studies Center warned that if demographic issues such as the aging population and drastic fall in birth rates continued to be neglected, Iran would go down an irreversible path of aging within the next eight years.

With the prospects of reviving the 2015 nuclear deal, known as the Joint Comprehensive Plan of Action, still uncertain, as well as the growing economic and sociopolitical discontent among many Iranians, the country’s demographic future remains unclear. Only time will tell if the government’s efforts to convince new families to have more children will be successful, thus saving Iran from a significant and irreversible demographic change in the coming decades.

Maysam Bizaer is an analyst and commentator who focuses mostly on Iran's foreign policy, politics, and economy. He is a frequent contributor to a number of international media and US-based think tanks covering the Middle East. Follow Maysam on Twitter @m_bizar. The views expressed in this piece are his own.