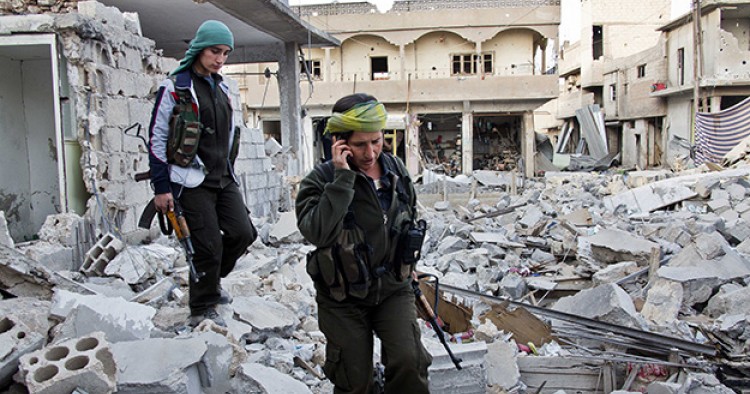 In the ongoing fighting in and around Kobani in northern Syria, it appears likely that the defending Kurdish forces will ultimately prevail and be able to expel the Islamic State (ISIS). However, in order to enable refugees to return, substantial aid and reconstruction efforts will be needed, and more benign Turkish border policies are essential in the meantime.

In the early days of the Syrian revolution, the regime tried to calm protesters with limited reforms, including the abolishment of “Decree 49,” which had regulated land ownership and construction in border areas and was used in a discriminatory fashion against Kurds. As the civil war took off elsewhere in the country, Kurds in Kobani, who had access to a cement factory, took advantage of the elimination of the decree and started to build new houses and add floors to existing ones. However, the construction was interrupted by the latest ISIS attacks, and at the time of writing Kobani is on its way to becoming another landmark ruin in the Syrian civil war landscape.

Idris Nassan, deputy foreign minister of the “Kobani canton” that was declared in January, estimates that 40 percent of the town has already been destroyed, including 90 percent of its shops. Most of the destruction has been brought about by artillery, improvised explosive devices, and air strikes, but some houses have also been set on fire by ISIS forces. “They do this to confuse the fighter jets with the smoke, and to take revenge on local people,” says Nassan.[1]

It remains to be seen how much of the town will still stand at the end of this struggle; ISIS forces will presumably loot whatever they can and destroy fixed infrastructure before they pull back. Even if the cement factory is recaptured intact, there will be a need to import doors, windows, and fixtures for private homes and other buildings.

Despite the siege imposed by surrounding ISIS forces, food was widely available in Kobani until the latest attacks. According to Kurdish shopkeepers, Arab smugglers were able to sneak in undetected. However, considering the vast quantities involved, it seems possible that some local ISIS elements made deals with the smugglers instead of enforcing the blockade. Most goods were smuggled in from the direction of Raqqa, while the western routes over the Euphrates River were more easily controlled by ISIS. Only small quantities could be smuggled in from Turkey, which has allowed aid but not trade across its border. Today, food prices have hit record highs. For example, one kilogram of tomatoes cost 5-10 Syrian pounds (SYP), or 3 to 6 cents, before the war, but in August the price had increased to 50 SYP (30 cents) in ISIS-controlled areas and had reached 200 SYP ($1.15) in Kobani. The simplest measure to improve current living conditions in Kobani would thus be for Turkey to open up its border for trade.

Small private bakeries are providing Kobani’s remaining inhabitants and fighters with bread. If large numbers of refugees return, the wheat mill and two large public bakeries will need to get up and running again, but the extent of damage to those facilities (as well as the wheat and flour stores) is currently unknown. There will be a need for aid shipments of flour and other food items until local agriculture is again able to satisfy local needs. An important measure to support the rural economy will also be to replace livestock captured by ISIS.

The inflation rate should also be taken into account in considering reconstruction, as well as the fact that many people have lost their livelihoods and have emptied their financial reserves. Like elsewhere in Syria, public servants in Kobani still receive their salaries from the central government, but in order to collect them they have to undertake an extremely perilous journey through ISIS-controlled territory to reach Aleppo. Those working directly for the Kobani canton generally receive no salary, and while many have displayed an impressive willingness to serve their community as volunteers, this is clearly not sustainable in the long run. In order to prevent a breakdown of services, international actors could guarantee salaries for key categories of public servants now and in the future—whether they work for the central government or the Kobani canton.

The water station on the east bank of the Euphrates River was taken by ISIS early this year, and the deep wells that were dug to replace it were captured in the latest attacks, along with the water treatment plant. Until these facilities are recaptured (and perhaps repaired), there is only very limited access to water from smaller wells inside the town. If large numbers of refugees are going to be able to return, a steady supply of clean water from Turkey might therefore be needed, as well as water treatment equipment for the smaller wells.

A handful of large public generators are used to supply Kobani with electricity, but only one remains in use since the others have been damaged or captured by ISIS. Until the electricity substation near Sarrin is recaptured, there will be a need to import new generators or procure electricity from Turkey.

Fuel is needed for these generators, as well as for cars, heating, and irrigation systems. Crude oil used to be brought in by Arab smugglers, likely from ISIS-captured oil fields, and subsequently processed in simple oil refineries outside town. The latter have now all been captured by ISIS, but replacing them would only mean reinstating Kobani’s dependency on enemy-controlled resources. The only sensible solution at present is to import fuel from Turkey. In the future, crude oil or refined products could be brought in from oil fields in the Kurdish-controlled Jazira canton of northeastern Syria, provided that the territory linking the two enclaves is captured from ISIS.

Two small public hospitals and one private facility used to cater to the needs of the local population, and the construction of a much larger public hospital was recently completed, but all of these buildings have been destroyed or are badly damaged, along with all but one ambulance and nearly all medical equipment and stored medicines. Only a makeshift ambulant aid station remains, staffed by a handful of doctors and nurses. Even the most basic supplies are scarce or entirely lacking, including bandages, antibiotics, and IV fluids.

Since early this year, seriously injured civilians and fighters have been evacuated to hospitals in Turkey, but several Kobani officials have claimed that Turkish policy became stricter in August, which led to several preventable deaths. No clear criteria were provided for who could be evacuated. “The mood of the Turkish soldiers and officials decides if they can pass or not,” said health official Dr. Hekmet Ehmed.[2] The haphazard character of the evacuation procedures has remained. Dr. Adnan Emin, a Kurdish-German volunteer, stated that at least ten patients recently died from gunshot wounds to the arms and legs that would normally not be fatal; they bled out while waiting for permission to cross the border.[3] In the shorter term, basic medical supplies from Turkey as well as improved evacuation procedures are crucial. A blood bank would also be highly desirable, considering that the aid station deals primarily with traumatic injuries. In the longer term, a new hospital must be built and equipped.

Conclusion: The Future of Kobani

While there are certainly autocratic features of the local Kurdish administration, it has proven its capacity to uphold security, organize services, and prevent corruption; this means that international actors have a reliable partner on the ground for aid and reconstruction projects. Moreover, a recent power-sharing deal between the Kurds’ dominant Democratic Union Party (PYD) and its rivals will probably bring the administration greater legitimacy in the eyes of the international community as well as the local population.

However, until Turkey adjusts its border policies, and until international aid and reconstruction efforts get underway, Kobani is destined to remain a ghost town—a symbolic pile of rubble inhabited mainly by its defenders. “We are not fighting to save the town anymore, but to stay free,” says Nassan. “Now we need weapons and ammunition to kick out the Islamic State, but after that we will need everything."

[1] Telephone interview with the author, October 2014.