What now for French operations in the Sahel? 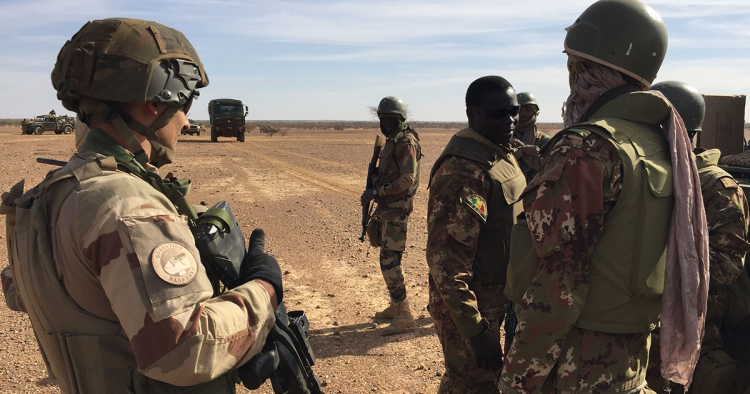 On Feb. 17, French President Emmanuel Macron announced the coming withdrawal of French armed forces from Mali. The decision put an end to nine years of French military intervention in the West African country. Started by Macron's predecessor, François Hollande, in January 2013, the French operation was initially meant to defend the government in Bamako against an offensive from jihadi groups such as Ansar Dine, the Movement for Unity and Jihad in West Africa, and al-Qaeda in the Islamic Maghreb. The offensive was the latest chapter in an insurrection that began a year before in Northern Mali and initially saw Tuareg independentists partnering with Islamist groups before the latter turned on them and decided to move their fighters closer to the Malian capital.

Originally codenamed "Serval," the French operation was rebranded "Barkhane" and enlarged to the whole Sahel region a year later. But if French troops were deployed to other Sahelian countries like Burkina Faso, Chad, and Niger, Mali remained for most of the last decade the center of gravity of Paris' strategy, with approximately half of its 4,600 soldiers in the region stationed there.

The latest decision by President Macron was not a sudden response but rather the ultimate consequence of a deep rift between Bamako and Paris that made a military withdrawal inevitable. From the outset, local observers had conflicted views on the French intervention, which progressively reignited resentment of the former colonial power. Malian officers and political officials frequently complained about France dictating to them the terms of governance in their own country. At the same time, French support to the former President Ibrahim Boubacar Keita (nicknamed IBK) grew problematic. IBK's rise to the presidency had come after elections held in July 2013, only a few months after the French intervention. Paris' close association with IBK then became a liability as the latter proved incapable of restoring state authority and implementing much-needed social and economic reforms to address the grievances of disenfranchised Malian communities. As a result, anti-French sentiment steadily increased along with IBK's own unpopularity.

In 2020, a coup led by a military junta ousted IBK and presented Paris with a difficult conundrum. At first, President Macron and his armed forces chose to prioritize the ongoing operations against terrorist groups while hoping that the political transition promised by the officers in Bamako would eventually restore the rule of law. But the situation kept worsening: Dissatisfied by a government reshuffle decided by the interim President Bah N'Daw, Col. Assimi Goita, then the vice president and de facto leader of the junta, launched a second coup in May 2021. Named interim president, Goita then postponed the hypothetical return to civilian rule to 2027, putting an end to the semblance of democratic transition.

In the meantime, the U.S. news agency Reuters revealed in September 2021 that Mali started working on a deal with the Wagner Group, a Russian private military company — a move signaling the desire of Bamako to further distance itself from France. The partnership unraveled when Mali expelled the French ambassador in late January 2022. By that point, the continuation of French military operations inside the country was made impossible.

Overall, the crisis with Mali epitomized two challenges confronting French decision-makers in their operations in the Sahel. First, France has been relying on local partners that had not only limited resources to fight terrorism but also limited legitimacy with the local population. In fact, the inability of those states to provide for the basic needs of their citizens partly drove the spread of radicalization. Out of the five member states of the G5 Sahel, an intergovernmental cooperation framework created for the region in 2014 and supported by France, only two — Niger and Mauritania — now have stable governments. In addition to the coup in Mali, Chad's then-ruler Idriss Deby died on the battlefield in April 2021 and was immediately replaced by his son, notwithstanding the lack of any constitutional basis. Likewise, Burkina Faso experienced its own military coup on Jan. 23, 2022, ending the presidency of Roch Marc Christian Kaboré.

French governments have never had any trouble working with African authoritarian regimes in the name of security and economic interests. But the coups in the Sahel directly undermine the purpose of its military intervention: In the short term, the politicization of armed forces in the region is likely to distract them from the demands of the battlefield and in the long term, it jeopardizes the French objective of promoting good governance across the region.

In addition to the volatile political environment, French forces have had to adapt to the evolving security threat. If a decade ago, terrorist groups were attacking from Northern Mali, they have since moved southward to the so-called "three border" region between Mali, Burkina Faso, and Niger. Moreover, in recent years the threat expanded to the Gulf of Guinea as neighboring countries like Ivory Coast, Togo, and Benin also became the target of multiple attacks.

Even before the final act with Mali, this migration of terrorist operations had forced French forces to review their regional posture. Back in June 2021, President Macron announced the scaling down of Operation Barkhane. At that time, most of Macron's plan already aimed at closing French military positions in northern Mali (in Timbuktu, Kidal, and Tessalit). Arguably this was driven by the political dispute with the junta in Bamako as much as the need to redeploy soldiers closer to the epicenter of the fight.

But now that France has decided to remove its entire military presence from Mali, how will it reorganize its regional posture? Authorities in Paris have not yet provided specific details on the logistical implications of this transition. In light of the domestic troubles and potential anti-French sentiment in Sahelian countries, the government in Paris is treading a delicate line. Niger appears an obvious choice to compensate for the military retreat from Mali. The elected president, Mohamed Bazoum, has indicated his desire to welcome French and European forces redeployed from Mali, but he did so by engaging with the Parliament, religious leaders, and civil society in order to mitigate the risk of social discontent that a Western military presence may trigger.

In the Gulf of Guinea, Ivory Coast is also likely to play a significant new role. A historical partner of Paris, the country already hosts 950 French troops, and last year it opened an International Academy to Fight Against Terrorism that aims to train African armed forces. In early February, a visit by the French Chief of Defense, Gen. Thierry Burkhard, to Abidjan was understood as another indicator of this ongoing revision of the French military footprint across the region. Diplomatically, this is also revealed by the desire of the French government to de-emphasize Mali and to promote, on a par with the G5 Sahel, the Accra Initiative, another regional framework launched by Benin, Burkina Faso, Ivory Coast, Ghana, and Togo in 2017.

Overall, the latest crisis between Paris and Bamako should not be seen as a sudden shift but rather the culmination of a dispute that had been brewing for several years now. It may accelerate the French military withdrawal from the country but Paris' search for an exit strategy was already evident.

In the coming months, the significance of the Sahel will probably be downplayed by the French Presidential Palace, the Elysee. In terms of domestic politics, as Macron enters the race for reelection ahead of the presidential vote in April, his advisors will try as much as possible to avoid a topic from which he has nothing to gain. Meanwhile, at the international level, the French president will surely spend much of his time and his political capital to address the consequences of Russia's invasion of Ukraine for Europe — a crisis now likely to overshadow French operations in the Sahel.

Jean-Loup Samaan is a senior research fellow at the Middle East Institute of the National University of Singapore and an adjunct lecturer at Yale-NUS College. Prior to that, he was a policy analyst at the Directorate for Strategic Affairs of the French Ministry of Defense (2008-11), research advisor at the NATO Defense College (2011-16), and associate professor in strategic studies at the UAE National Defense College (2016-21). He regularly lectures at the G5 Sahel Defense College. The views expressed in this piece are his own.