What will SCO membership mean for Iran? 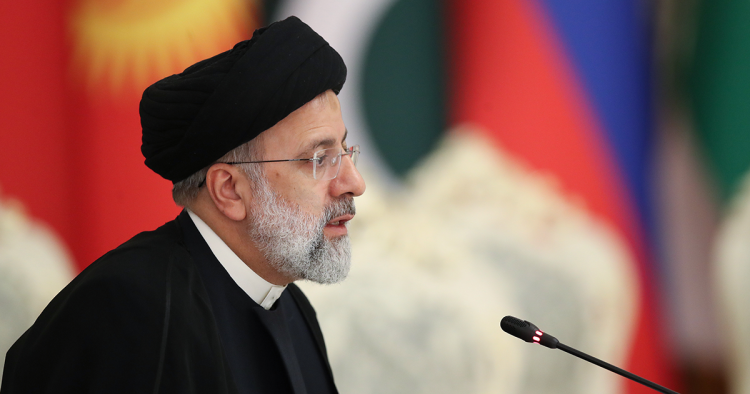 Iran came one step closer to becoming a full member of the Shanghai Cooperation Organization (SCO) last week with the approval of its bid, 15 years after it first applied. The organization, which includes China, Russia, and India, in addition to Tajikistan, Kazakhstan, Kyrgyzstan, Uzbekistan, and Pakistan as members, accounts for about one-third of the world’s landmass and nearly one-quarter of global GDP. The accession process is expected to take up to two years to complete.

The Iranian media hailed the decision as "a great victory” for the country’s new president, Ebrahim Raisi, who took office in August. The approval highlights Iran’s closer ties with China and Russia at a time when all three countries are facing mounting pressure from Washington.

Iran’s hardline president, who did not come to New York for the United Nations General Assembly last week but went to Dushanbe, Tajikistan for the SCO meeting, thanked all eight member states for allowing Iran to join the organization as a full member. “The world has entered a new era,” Raisi said, repeating that “hegemony and unilateralism are failing.” Back in Tehran, he called SCO membership a “strategic move.”

While Iran may not see much short-term benefit, the move signals closer ties to China, one of the organization’s most powerful member states, as well as Russia. Iranian media described the membership as evidence that Iran and China “are moving extremely close,” claiming that perhaps pressure by China and Russia led to admitting Iran into the organization.

Iran has traditionally looked west toward Europe for trade and investment partners. Increasingly though, it has grown frustrated with European countries that opposed former President Donald Trump’s policy of “maximum pressure” on Iran but quietly withdrew from the kinds of deals that the 2015 nuclear agreement once promised.

Both Raisi and Iranian Supreme Leader Ali Khamenei have repeatedly stressed that the country must "look to the East" not only to resist its economic isolation from the West, but also to find strategic allies that would help it reach a new agreement on the nuclear program, address the banking and trade problems U.S. sanctions have imposed on Iran, and strengthen its role in the Middle East and Asia.

Over the past few decades, China and Iran have developed a broad and deep partnership centered on China's energy needs and Iran's resources as well as significant non-energy economic ties, arms sales and defense cooperation, and geostrategic balancing against the United States.

Iran and China have divergent regional interests, but a common adversary, the United States, has prompted the two countries to work together.

China has become Iran's number one oil customer and trading partner. In return, China has provided Iran with the technological know-how to develop its energy resources, modernize its military hardware, and develop its infrastructure. China's economic ties to Iran have shielded the Iranian regime from the full effects of international sanctions.

Last spring, Iran and China announced that the two countries were working on the details of a 25-year agreement. The news came after renewed American sanctions had succeeded in suffocating the Iranian economy by scaring away badly needed foreign investment. The sanctions cut off Iran’s access to the international banking system or that of any company that did business there. Iran’s oil exports and trade dropped. As a result, earnings from Tehran’s largest source of revenue plunged dramatically.

China was quick to take advantage of the situation and Tehran’s desperation pushed it into Beijing’s arms. Both China and Iran have been discreet about the details of the agreement. A document obtained by The New York Times revealed that the two countries quietly drafted a sweeping economic and security partnership that would clear the way for billions of dollars of Chinese investments in energy and other sectors. The partnership, detailed in an 18-page document, would vastly expand Chinese presence in banking, telecommunications, ports, railways, and dozens of other projects. In exchange, China would receive a regular — and, according to an Iranian official and an oil trader, heavily discounted — supply of Iranian oil over the next 25 years.

Many worry that the agreement would potentially give China a foothold in a region that has been a strategic preoccupation of the United States for decades. The agreement has not yet been submitted to Iran’s parliament for approval or made public, stoking concerns about how much the government is willing to give away to China.

There have been suggestions that Iran could sign a similar agreement with Russia.

What is Iran seeking from the SCO?

Iran could be seeking access to the Central Asian region, which can be regarded as a market for exports of Iranian goods. The SCO includes both the largest fuel producers and the largest buyers of hydrocarbons.

It’s highly unlikely the organization, which is mostly focused on security and stability in the vast Eurasian region, would provide that kind of opportunity for Iran. Critics in Iran were quick to point out that joining the organization would not address the country’s economic dilemma. The conservative daily Kayhan went as far as cautioning officials “to avoid turning Iran into a market for products from the East,” a reference to Chinese goods. Analysts urged the government to pursue constructive nuclear talks with the West and to comply with the global anti-money laundering task force regulations to address the country’s trade problems. Iran is on the Financial Action Task Force blacklist and the conservatives, including Raisi, have refused to pass bills required by the watchdog.

Afghanistan, and the ramifications of the Taliban takeover, was a top issue for discussion at the Tajikistan summit. The U.S. exit from Afghanistan has changed the regional landscape. Iran shares a long border with Afghanistan and thousands of refugees have poured into the country, which is already home to 2 million legal and undocumented Afghans. An Iranian official said over the weekend the government has barred 2,000 Afghan refugees a day from illegally crossing the northeastern border of Taybad into Iran since the Taliban took over. The foreign ministers of China, Russia, Pakistan, and Iran held a meeting to discuss Afghanistan on Sept. 16, the first day of the summit, in Dushanbe. All the SCO member countries, including Iran, are concerned about Afghan stability, and the U.S. withdrawal provides them with an issue to cooperate on.

Iran’s strategy of using ties with China and Russia as leverage against Western capitals worked to some extent over the years. Yet, Iran never deviated completely from its slogan, “Neither East, Nor West,” which has been a pillar of its foreign policy since the 1979 revolution. But different times require different policies. The SCO summit was the first foreign trip for Raisi. Perhaps the Islamic Republic is changing course by replacing symbolic acts with concrete measures.

However, analysts in Iran were skeptical if joining the SCO would create any real opportunities for Iran. Fardin Eftekhari, a postdoctoral candidate at Tehran University, argued that in fact, Iran’s insistence on having a seat at the table would generate more leverage for Moscow and Beijing to bolster the country’s overreliance on the East. “There is a misconception in Iran’s foreign policy that merely being a part of the different regional bodies in neighborhood regions, including Eurasia, could spontaneously break the ‘sanctions wall’ and lead to diversified fruitful foreign relations,” he wrote.