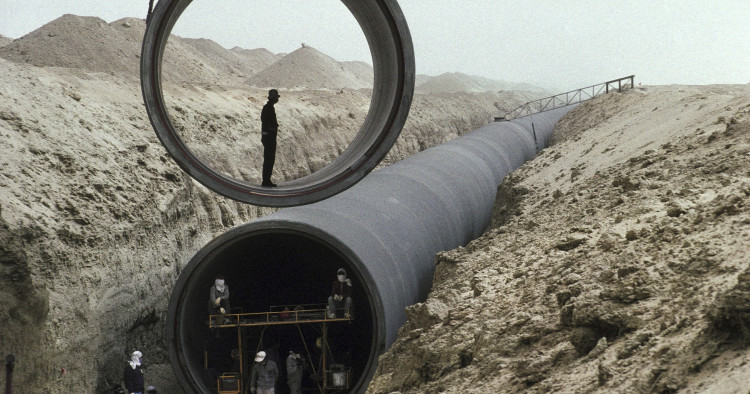 The Middle East and North Africa are well known for their severe water scarcity. The region’s lack of water resources is the result of many factors, including the harsh climate, intense heat, high evaporation rates, and increasing population growth. Libya is no exception in this regard. According to the World Resources Institute, it ranks 6th among the top countries worldwide facing “extremely high baseline” water stress.

Libya has no natural water reserves, such as rivers, and thus depends heavily on groundwater aquifers. Given the growing impact of climate change, it will be quite difficult for the country to continue to rely solely on natural resources for its water supplies. The discovery of oil in the 1950s, known as Libya’s black gold, also led to the discovery of large water aquifers. The development of the oil industry created a massive opportunity for the country — and its growing population — to profit from the export of hydrocarbons resources. This led to an overexploitation of natural resources that the former Libyan regime under Moammar Gadhafi justified by pushing propaganda about resource abundance, suggesting the country's groundwater aquifers would provide a continuous supply of water far into the future.

Although desalination, the process of extracting salt from seawater and purifying it for use as drinking water, was briefly introduced in the 1960s, it was not given much attention when the Gadhafi regime took power in 1969. Rather, the focus shifted to the Great Man-Made River Project (GMMRP), a massive civil engineering scheme designed to transport water through a network of underground pipes from deep aquifers in southern Libya to its northern coastal cities. These cities are home to the vast majority of the country's population: 78.2% of Libyans live in urban areas, or 5.38 million people out of the total of 6.8 million in 2020.

A number of arguments were made to justify the shift in focus from desalination to the GMMRP, although the main ones highlighted the high economic costs associated with desalination, including the maintenance costs, as well as the lack of accessible desalination technology and infrastructure.

Mega-projects like the GMMRP frequently bring about significant environmental and social changes and often come with substantial economic and ecological costs. It is essential, therefore, to understand the long-term impacts of such mega-projects on developing communities.

Overview of the project

The GMMRP, regarded as one of the world’s largest irrigation projects, aims to deliver water across Libya along a network of underground pipes. Due to overexploitation of coastal aquifers, resulting in seawater intrusion since the 1930s, there was a pressing need to find an alternative water source that could meet Libya’s growing demand.

Following the completion of an initial feasibility study, the Great Man-Made River Authority (GMMRA) was created in 1983. Construction of the GMMRP was divided into four stages, each with a specific water volume and a geographic area to service. The plan was to drill wells hundreds of meters deep under the ground. Then, the wells were to be connected to the coast through a 4,000-km-long network of pipelines. These pipelines were planned to deliver over 6 million cubic meters of water per day. In the mid-1980s, Gadhafi declared the beginning of phase one and laid the first cornerstone for the project at the Sarir aquifer in eastern Libya.

The GMMRP is fully funded by the Libyan government and a 1% percent income tax deducted from public wages is used to support project financing. The budget estimate for the project is claimed to have been $20-25 billion, although the exact amount spent is unclear. The GMMRA has previously declared that the total expenditure was exaggerated, but this has not been confirmed.

It was reported in 2017 that the project delivers 2.5 million cubic meters of water daily, though the total volume fluctuates according to events taking place in the country, which affect the project directly. In the post-Gadhafi era, the GMMRP has been operating with two of its originally planned four phases and highlights its functionality as a service provider that aims to deliver water regardless of the political and economic instability in Libya. In fact, the GMMRA has been using its official Facebook page to report and update the public on any accidents, vandalism attempts, and maintenance operations that occur. In May 2022, the authority announced that, after the completion of the plan to raise the productivity of the al-Hasawneh Sahl al-Jafara system, a total of 34 pumps have been installed to date this year, equivalent to 45.3% of the target for the year.‎

The state of the project since the 2011 revolution

Although the project may have been intended to prevent a water shortage, the history of the GMMRP’s development has been marred by crony capitalism and nationalist policymaking. The project reflected a particular ideology of the former regime, one that strongly opposed colonialism and imperialism, and it billed the project as an effort that would be fully constructed, controlled, and financed by the Libyan government. Ironically, however, contracts for the project's construction were awarded to foreign companies and maintenance work has also been carried out by foreign firms.

The GMMRP held a unique position in Libya under Gadhafi, but it lost this following the fall of the regime in 2011. Although the GMMRA has managed to distance itself from the country's political upheaval by emphasizing its role as a service provider, the project has faced numerous property attacks and acts of vandalism over the past decade.

Phases three and four of the GMMRP have yet to be completed and construction has been delayed as a result of attacks on network locations. International companies have been unable to resume their work on the project due to ongoing security concerns. Since the revolution, there have been a number of reported cases of kidnappings when firms have tried to continue work, and as a result many companies have eventually withdrawn altogether.

Evolution of the project: Current challenges and future plans

According to the GMMRA, during the Gadhafi era operating conditions, supervision, and oversight of the GMMRP were stronger. All the wellfields and different stations of the system — ranging from electricity and ventilation to the water tanks themselves — were protected by the national military across the country.

Current issues, however, are not limited to completing the two remaining project phases. Libya’s political instability since 2011 has affected almost all sectors and aspects of society. The volatile economic situation has affected many governmental institutions, including the GMMRA. This has resulted in repeated delays to meeting financial requirements, while irregular revenue collection, due to a lack of commitment from the responsible authorities and customs outlets, exacerbates fiscal constraints.

The lack of a stable power supply, continued security breaches against GMMRP infrastructure, and attacks on personnel have further compounded these issues. However, the challenges facing the project cannot simply be ignored because of the poor economic and security conditions.

Despite the continuous challenges, the GMMRA says it has developed a strategic plan for 2019-23 to achieve the project's vision. This vision is multi-fold and aims to ensure water security by managing and engineering the project’s processes, considering economic and environmental factors to increase the efficiency of operations and maintenance procedures, and preserving the integrity of the pipe system. Legally, strengthening the claims and dispute management process will safeguard contractors’ rights and help to restore international contracts for the project.

However, there have also been significant difficulties to realizing this vision. During Libyan National Army chief Khalifa Hifter's 2019 offensive on Tripoli aimed at seizing power, the authorities postponed implementing the GMMRA’s strategic plan when armed men attacked the system, preventing water from reaching the capital. This illustrated how access to water can be weaponized to amplify wide-spread instability and threaten people’s livelihoods. At the end of the offensive in 2020, the GMMRA resumed its plan for the maintenance and preservation of the network’s pipes, with resulting delays.

Although the GMMRP has done a great deal to ensure access to water across the country for both agricultural and domestic use, the authorities have not fully considered the effects of climate conditions and change on the project. Even as they rely on it as the sole option for ensuring a steady supply of water, Libya’s political and economic instability has underscored the vulnerability of the project, which has been under continuous threat of physical attack and suffers from gross mismanagement. It has thus become essential for Libya to devise alternative means for managing groundwater resources and exploring other water resource development schemes, such as revisiting desalination and potentially other technologies that can support the country’s growing demand for water.

Malak Altaeb is a non-resident scholar with MEI’s Climate and Water Program and an independent consultant, writer, and researcher based in Paris, France. The views expressed in this piece are her own.