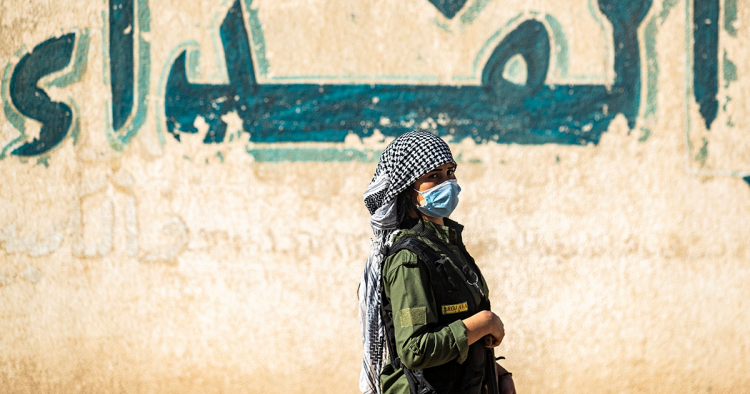 In early June, the Syrian Democratic Forces (SDF), the military wing of the Autonomous Administration of North and East Syria (AANES), raided the al-Mouh neighborhood in the town of Abu Hamam in eastern Deir ez-Zor Governorate. The forces burned down several houses under the pretext that their owners were wanted for smuggling oil derivatives to areas under Syrian regime control. For the local population, the manner in which the houses were destroyed was reminiscent of the methods used by ISIS when it was in control of the area. Nevertheless, the incident did not provoke any response from the al-Shaitat tribe affected by the acts of destruction.

This incident was preceded by armed clashes that continued for several days between the SDF and members of the al-Bakeir tribe residing in the east and north of Deir ez-Zor; these clashes led first to the death and wounding of fighters from both sides and then to a near-complete withdrawal of SDF military checkpoints from the area. Soon afterwards, however, things returned to the status quo ante, without the two sides having reconciled or solved the underlying problems. This raises an important question: Why do local communities respond to attacks by the AANES and its military wing in at most a limited way when these same communities fought fierce battles against the Syrian regime and ISIS when they carried out similar attacks?

There are several reasons for the limited response by local communities. The first and most important is that they see limited action as the best option for now, particularly when compared to the two alternatives to the AANES: the Syrian regime with its allies Russia and Iran on the one hand and ISIS on the other. Local communities have tended to reject both of these options, as a result of what is an existential enmity with them. This hostility is a result of the horrible acts, including murder, arrests, and displacement, committed against local inhabitants by both the regime and its allies and ISIS. Thus, as a matter of realistic comparison, the AANES is considered the least harmful and most acceptable of the available options.

The third reason is related to public liberties. The areas under the AANES enjoy public freedoms that are not available in the regions under regime control, especially when it comes to political rights and freedom of expression. These freedoms, although limited in AANES areas, are much more extensive when compared to the restrictions imposed by the regime. Over the years of AANES control, protests against its policies have never ceased. Moreover, local communities have continued to express their rejection of the AANES’s strategy and have asserted that their relationship with it is based on temporary mutual interest. While occasionally the AANES has used violence to suppress those who violate its policies, locals still see it as the best available option.

The fourth reason is related to the economic situation and cost of living. The areas under the AANES enjoy a better standard of living than their counterparts under the regime, who suffer from high prices and the collapse of the Syrian pound. For residents in regime areas, incomes do not meet basic needs due to the collapse of the economic system in the wake of the prolonged political crisis and the sanctions imposed on the regime. The better economic conditions in the areas under the AANES, however, are not due to its effective economic policies, but rather to the availability of basic resources (especially wheat, crops, and oil derivatives) and the activities of outside organizations, particularly international ones, that support private projects.

The fifth reason is related to service quality. The services available in the areas controlled by the AANES are better, relatively speaking, than those elsewhere. Among these services are electricity, schools, agricultural associations, and civil peace supporting initiatives. The availability of such services is the fruit of work by international and local organizations following the region’s liberation from ISIS control.

The final reason relates to the fact that the AANES does not interfere in the religious affairs of local communities or impose policies in this regard. This is because its endeavor is not a religious one. ISIS, by contrast, although presenting itself as a Sunni Muslim project, clashed with religious norms in the region. Still, local communities recognize the Syrian regime and the Iranians behind it as their greatest threat. The Shiite religious project, which Iran has been supporting with particular zeal in eastern Syria, is seen as a means for Iran to spread its ideology and influence through Iraq to the rest of Syria, Lebanon, and the Mediterranean.

These reasons, among others, explain why local communities generally refrain from responding against the AANES and its widely disliked practices. Even when they do respond, these communities seek to avoid serious conflict with the AANES in order not to open the door to chaos, which could provide the regime or ISIS with an opportunity to regain access to the region. This approach by local communities is predicated ontheir understanding that it would be practically impossible for Free Army factions to resurge and regain control of the area. The AANES, recognizing that it is the only viable option for local communities east of the Euphrates, exploits this situation to secure its presence in those areas. As a result, it can dedicate its energy to facing the threat of attacks carried out by the regime through its cells in the area, as well as the threat posed by ISIS.

The AANES and local communities can sustain their relationship in the long run, provided that both sides continue to believe that it is in their mutual interest to do so. Local communities, however, do maintain justified fears. They are especially concerned that the AANES may hand over the region to the Syrian regime and its allies as part of a direct agreement between the two sides or following a sudden, unilateral withdrawal, as previously occurred in Manbij and the areas of the northern countryside of Raqqa. These concerns increase whenever there are reports of an imminent Turkish military operation in northern Syria, as is currently the case. The AANES has often sought support from the Syrian regime, allowing its units to enter the area to confront Turkish forces and local supporters of the factions of the Syrian National Army.

Mohammed Hassan is a university student at the Faculty of Law, Department of International Law. His writings focus on the regions of northern and eastern Syria, especially extremist Islamic groups and tribal societies. The views expressed in this piece are his own.