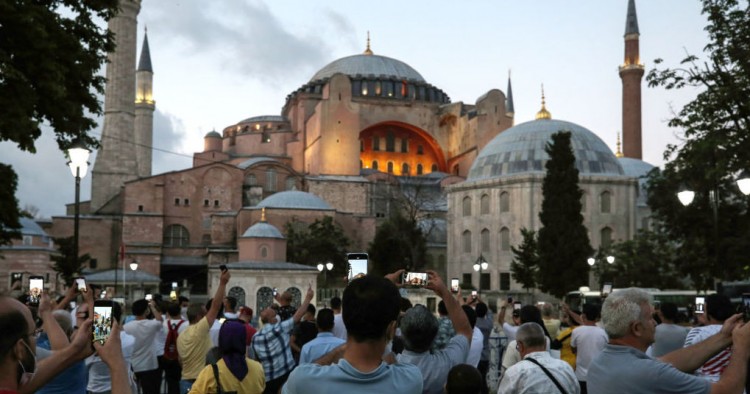 On July 13, Turkish President Recep Tayyip Erdogan called his Russian counterpart President Vladimir Putin. Among the issues the two leaders discussed was the decision of the Turkish government to change the status of Hagia Sophia in Istanbul. Putin told Erdogan that the decision triggered “considerable public outcry in Russia” and the Turkish leader reassured him of two things: access to the “unique monument of world civilization would be guaranteed for all wishing to visit it, including foreign nationals, and the safety of the items sacred to Christians would be assured.”

On July 10, the Turkish Council of State revoked the 1934 government decree that assigned Hagia Sophia, originally built as a cathedral 1,500 years ago, museum status. With the new decree, President Erdogan converted it from a museum back into a mosque.

The Ottomans conquered Constantinople, the capital of the Byzantine Empire, in 1453 and turned what was then the world’s biggest Christian cathedral, Hagia Sophia, into a mosque. A few years later the Grand Duchy of Moscow, egged on by the Greeks, formulated the theological and political idea of Russia as a successor to the Byzantine Empire, referring to Moscow as the so-called “Third Rome” (after the original and Constantinople). Russian historians believe that although the Russian elites flirted with the concept in the 16th century, it wasn’t fully embraced until the 19th century. Russia and Turkey have fought over the dozen wars throughout their history, in the Black Sea, the Caucasus, and the Balkans, and the idea of “freeing Christian brothers” was an important psychological driver for Russian elites and a motivating force for the military. The “return of Constantinople” is a marginal idea in the overall spectrum of political opinions in today’s Russia, but it remains one of the sacred dreams of the country’s nationalists. For them Erdogan’s decision on Hagia Sophia was painful.

“The history of relations between Russia and the Byzantines wasn’t always smooth. Yet any attempt to humiliate or defy the thousand-year legacy of the Constantinople Church is received by the Russian people — then and now — with grief and indignation. The threat to Hagia Sophia is a threat to the Christian civilization and, by extension, to our spirituality and history. Still today, for any Russian Orthodox, St. Sophia Cathedral is one of Christianity’s greatest sacred places,” Patriarch Kirill of Moscow and All Russia argued in an extended statement on the issue days before Turkey’s decision.

“Today, relations between Turkey and Russia develop dynamically. But it should be taken into account that Russia is a country with a big number of Orthodox Christians. Therefore, anything that happens to Hagia Sophia will pain the Russian people. We hope for the prudence of the Turkish leadership,” Patriarch Kirill concluded. What looked like advocacy for Christians in Russia and elsewhere was also Patriarch Kirill’s attempt to repair the reputational and political damage that the Russian Orthodox Church had suffered over the last few years from its own disputes with Ukraine and Patriarch Bartholomew I in Istanbul.

Erdogan’s efforts to reshape the nature of the state

A more liberal segment of the Russian policy-making community stressed a different angle. To them, Erdogan’s decision on Hagia Sophia is less of an assault on Christians but more of an attack on Mustafa Kemal Ataturk’s legacy in Turkey — and first and foremost, on the secular nature of the state itself. Internationally, the Turkish government may not like the parallels that are often drawn between modern-day Turkey and the Ottoman Empire, but the fact that President Erdogan seeks symbols to anchor a new, non-Ataturkist Turkey means the world, including Russia, will have to deal with a more nationalist, more independent, and more assertive Turkey.

When the time came for Moscow to state its official position on the Turkish government’s decision vis-à-vis Hagia Sophia, the aforementioned factors played a role. But they were superseded by the considerations of other players whose position is even more important to Ankara, namely the United States. In early July, Ankara denounced Secretary Mike Pompeo’s calls “to continue to maintain the Hagia Sophia as a museum” and that Washington would view a change in status “as diminishing the legacy of this remarkable building.” The Turkish Ministry of Foreign Affairs responded that it was “our internal affair as part of Turkey's sovereign rights.”

“If you can’t resist a protest, make sure you take the lead of it”

For Moscow, Erdogan’s decision wasn’t easy to stomach. After all, Russian President Vladimir Putin has invested heavily in his image as a politician who stands up for conservative values at home, protects Christians in the Middle East, and makes the Orthodox Church part of Russia’s “power greatness.” But Putin has also positioned himself as a realpolitik type of foreign policy practitioner. And in that domain he probably realized — or was advised — that there was little that he or anyone else could do to reverse Turkey’s decision on Hagia Sophia. As a Russian saying goes, “If you can’t resist a protest, make sure you take the lead of it.”

Therefore, on July 6, Putin’s spokesman Dmitry Peskov voiced Russia’s position on the issue: “The decision to change the status of St. Sophia Cathedral in Istanbul is Turkey’s own internal affair.”

“It’s our hope that the status of [Hagia] Sophia as a World’s Heritage Site will be taken into consideration by our colleagues,” Peskov, himself a trained Turkologist, added.

Essentially, Russia adopted a position that was meant to fly with Turkey on at least two levels. First, it would once again underscore Putin’s status as a reliable partner when it comes to strengthening the Turkish leader’s power grab at home – in 2016, it was also Putin who allegedly warned Erdogan of the coup against him. Second, at yet another important moment in Turkey’s modern history, Moscow’s position would be more amenable to Ankara than that of Washington or any other Western government.

Certainly, Russia’s reaction will make many Greeks as well as Russian (and, perhaps, other Slavic) nationalists go ballistic: To them, Putin has thrown the ideals for which Russia had long been held in high regard under the bus. Yet Moscow’s reaction is also quintessential in that for all the talk about “continuity” in Russian foreign policy tradition — as far as “defending the Slavs and other Christians against the Ottomans” is concerned — it’s also a moment of “change” when it comes to how best to approach a resurgent and ambitious power that has long been a historic rival. Only time will tell whether this was the right moment and issue to make this change, however.