Why does Trump treat Iran and North Korea so differently? 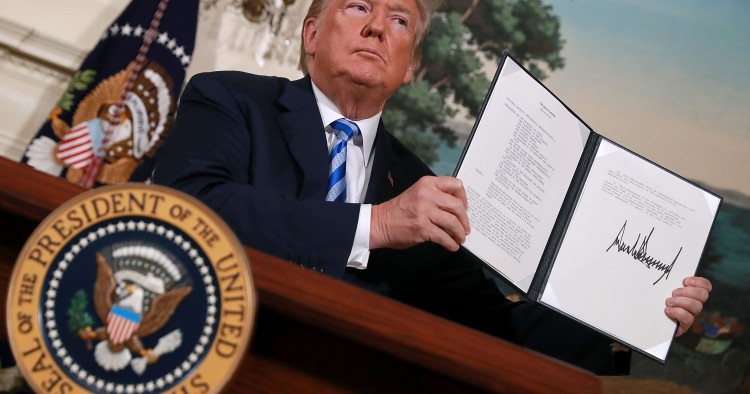 Iran and North Korea both get a great deal of attention from the international community — for all the wrong reasons. Yet while U.S. President Donald Trump and North Korean Supreme Leader Kim Jong-un have met several times now, shaking hands, smiling, and posing for photos, Trump has not once met with Iranian President Hassan Rouhani or other senior Iranian officials. What accounts for this difference? As this paper will lay out, there are four reasons that explain the divergence in American policy toward the two countries: nuclear capability, actions in the international arena, domestic lobbies, and the role of China.

At the end of the G20 summit in Osaka, Japan, in late June, President Trump tweeted an invitation to Kim, reading: “After some very important meetings… I will be leaving Japan for South Korea (with President Moon). While there, if Chairman Kim of North Korea sees this, I would meet him at the Border/DMZ just to shake his hand and say Hello(?)! .” Chairman Kim saw the tweet, and the two met the next day for the third time. Before the meeting, Trump toured the Korean Demilitarized Zone with South Korean President Moon Jae-in. He then crossed the border briefly and met with Kim, making him the first sitting U.S. president to visit North Korea.

Officials spun the meeting as a spontaneous visit between friends. Whether or not it was truly unplanned is irrelevant. What is important is the message the two leaders were trying to send — and which they appeared to both want to send: that Trump and Kim are on good terms and can and will to work together. In a world where social media shapes the political discourse, such an act could even be considered more important than an actual deal.

U.S.-Iran tensions, by contrast, have been escalating since Trump took office, reaching new heights in recent weeks amid an ongoing series of incidents, including attacks on oil pipelines, the seizure of tankers, and the downing of drones on both sides. The language the U.S. president has used is also noticeably different. On July 8, for example, after Iran announced plans to accelerate its uranium enrichment beyond the limit agreed upon in the 2015 non-proliferation accord, President Trump issued a warning that “Iran better be careful.”

Iran and North Korea both started pursuing nuclear capabilities in the 1950s and 1960s. But while Iran has only recently declared that it might renew efforts to develop an offensive nuclear capability and manufacture intercontinental ballistic missiles, North Korea already possesses both. And this makes all the difference in the world. Lacking a credible deterrent like North Korea’s, Iran is especially vulnerable to American policies like “maximum pressure” that are designed to ensure it never develops one. Such preventative measures are easy for the U.S. to impose, especially when compared to the challenge of convincing the North Koreans to give up their existing capability.

Actions in the international arena

Beyond nuclear ambitions, Iran’s activist foreign policy differs significantly from that of North Korea, which has a limited footprint abroad. By contrast, American interests clash with Iranian policies across the Middle East from Syria and Yemen to Iraq and Gaza, among other places. Even though since 2017 North Korea – like Iran – has been considered a state sponsor of terrorism by the U.S., the conflict between the U.S. and North Korea largely centers on the nuclear issue. This is due to the fact that North Korea’s main ambition lay in the nuclear domain and its activities on the global stage are more limited in scope.

American domestic politics play a role as well. For many years Iran has threatened Israel, prompting certain interest groups in the U.S., including the Jewish and Evangelical communities, to push for decisive action. In addition, the U.S. is also home to a large Iranian diaspora community that includes many opponents of the regime in Tehran. This has created a strong anti-Iran lobby in Washington, which works tirelessly to denounce the regime, strengthen sanctions, and prevent the Islamic Republic from achieving a nuclear capability. The Trump administration is especially inclined to lend them a sympathetic ear, although even it has disagreements over how to deal with Iran. On the one hand, John Bolton, the White House national security adviser and most vocal opponent of Tehran in the administration, stated on July 8 that, “We will continue to increase the pressure on the Iranian regime until it abandons its nuclear weapons program and ends its violent activities across the Middle East, including conducting and supporting terrorism around the world.” On the other hand, Trump has himself expressed frustration with his senior advisers and fears that a military confrontation would violate his public promises, telling White House reporters, “Hope we don't go to war with Iran.”

North Korea, by contrast, does not target Israel or operate terrorist networks that harm U.S. interests or those of its allies, and therefore does not provoke the same domestic political pressure. It follows that the American president must demonstrate strength against Iran to win support from these domestic interest groups, especially given the upcoming 2020 elections. He does this by sharpening his tone against Iran while softening his stance on North Korea, which highlights his openness and flexibility.

The conflict between the U.S. and China since President Trump’s election has also had secondary effects on U.S. relations with other countries, impacting both North Korea and Iran. The two states have a close relationship with China. Indeed, though North Korea is considered to be the most isolated country in the world, it maintains diplomatic relations with 17 countries, with China serving as its lifeline. Although Iran has diplomatic relations with more than 90 countries, it too relies on China as an important backer. This support is especially apparent in international forums like the UN, where China defends Iran and blocks various resolutions related to it. China may also be an economic lifeline as well: According to some sources, China bought oil from and traded with Iran during previous international sanctions, and continues to do so today despite the current U.S. sanctions.

The struggle between the world's two largest economies, China and the U.S., is not only about trade and the economy, but also geopolitical influence. North Korea is a long-time client state and close neighbor of China, and for the American president it provides an opportunity to remind the Chinese leadership that he can play a leading role even in their own backyard. When Trump meets with Kim, he shows Chinese President Xi Jinping, with whom he is in both dialogue and conflict, who is more powerful and tries to gain broader influence on the international stage. With the Iranians, however, the American president wants to show the entire world, including the Chinese, how tough he is and how far he is willing to go to achieve his goals.

As this case makes clear, and not for the first time, relations between superpowers and smaller states are shaped to a greater extent by external factors than internal ones. The first two reasons mentioned above — nuclear capabilities and actions in the international arena — are of course deeply connected to what’s going on within Iran and North Korea, but the latter two reasons — domestic lobbies and especially the role of China — are only indirectly connected.

Moving forward, this divergence in policy under which North Korea and Iran are treated very differently by the U.S. government is likely to continue at least until after the upcoming 2020 elections. If Trump is re-elected, it may well continue in the following years as well. For now, it is difficult to ascertain whether the sanctions and pressure on Iran or the smiles and goodwill toward North Korea will ultimately achieve their goal. Nevertheless, taking into account both these external and the internal factors will help to shed some light on the moves made by the U.S., North Korea, and Iran in the months to come.