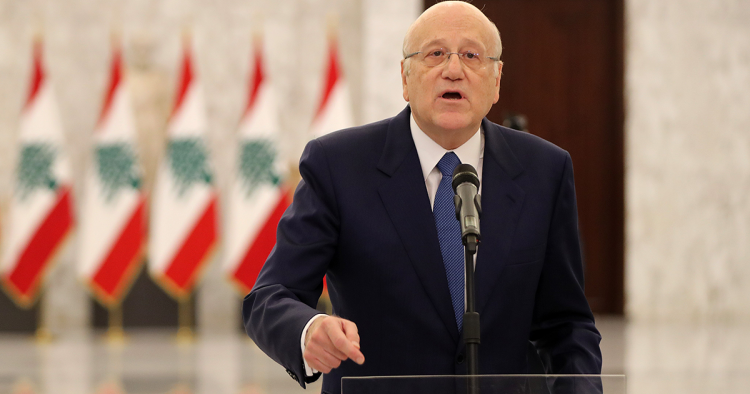 After 13 months of political gridlock, economic collapse, and civil unrest, Lebanese politicians formed a new government on Sept. 10. Three-time Prime Minister Najib Mikati heads a new cabinet, the first since the previous one resigned in the wake of Beirut’s devastating port blast in August 2020. Though the formation of a new government provides a way forward to address the myriad crises facing the country, it falls far short of the near-revolutionary changes demanded by Lebanese citizens protesting in the streets. Instead of non-partisan specialists forming a new unity government, Lebanon’s notorious sectarian elites have handpicked a government of technocrats close to them to handle the current situation, the most brazen of which are the new ministers of finance and public works.

Ministers in Lebanon wield a wide range of powers, enjoy a large staff, earn a sizable portion of their salary for life, and can only be prosecuted by a parliamentary committee. They are almost always political apparatchiks instead of subject matter experts and serve as conduits for Lebanon’s political parties to siphon off public funds and find jobs for their partisans.

Eye on the Ministry of Finance

One of the main reasons it took so long to form this government was that Lebanon’s two dominant Shiite parties, Hezbollah and Amal, demanded that the Ministry of Finance be reserved for their sect. The same demand led Mustapha Adib, a former diplomat, to give up on forming a neutral technocratic government in the hope of unlocking billions of dollars in foreign aid in late 2020. Saad Hariri, the other former prime minister who had been tapped to form a government before Mikati, had in fact acquiesced to the demand, saying that he would allow an independent Shiite figure to be nominated to the position as a one-time concession. Mikati also seems to have followed suit, selecting former central bank official Youssef Khalil to fill the post. Though technically not a member of either Shiite political party, Khalil was nominated by the speaker of parliament and head of the Amal Movement, Nabih Berri.

He is also a close confidant of the head of the central bank, Riad Salameh. Together, the two were the architects of Lebanon’s post-civil war financial system that eventually brought the country to its present ruin. Analysts have called the system Salameh and Khalil set up a massive Ponzi scheme, where the central bank — and in turn private banks — offered overly generous interest rates on deposits kept in foreign currencies. When new deposits stopped flowing in, the system collapsed, leading to liquidity and solvency crises and an immediate downward economic spiral.

Since Hezbollah has dominated the Shiite political scene for decades now, filling all major Shiite-allotted posts in the country, it is unlikely a top-ranking Shiite figure came to power without its blessing. There are clear reasons why the Party of God has been vocal about the Ministry of Finance being allocated to the sect they dominate.

Hezbollah’s power-play is part of its longtime strategy to increase its control over the Lebanese state’s arcane mechanisms. The alliance of the Amal Movement and Hezbollah dominates the Shiite vote, putting them in a position to nominate anyone into a position reserved for their confession. Since the 1990s, the head of Lebanese University, Lebanon’s largest public university, has been allocated to the Shiite sect, creating an ideological base for both parties on its main campus. Even more important was the allocation of the head of the Directorate of General Security to their roster of state positions. The agency issues Lebanese passports, visas for tourists, and work permits for foreigners, as well as handling Lebanon’s borders. Effectively, it oversees everyone who comes in and out of Lebanon, foreigner or national. The current head of the agency, Abbas Ibrahim — an ally of Hezbollah — has often been involved in international negotiations, giving the party a say on the country’s international security cooperation in a volatile region.

More so than the Ministries of Defense or Foreign Affairs, the Ministry of Finance is perhaps the greatest prize of all. It oversees the national budget, tax collection, public debt, customs, the land registry, international payments, and liaisons with the central bank. More importantly, it signs off on funding for major projects. In fact, any ministry that needs any funds for any project must get the minister of finance’s signature; without it, the transfer of funds cannot take place.

This could alter the balance of power in the country. Pre-civil war Lebanon was slanted in favor of its Christian communities while post-civil war Lebanon was meant to be based on Muslim-Christian parity in government. Laws in Lebanon need the signature of the president (Maronite) and prime minister (Sunni). But with the need for financial aid and reconstruction projects to go through the ministry (now firmly in the hands of the Shiite sect as well as the speaker of parliament), this would instead usher in three-way power sharing in the country — between the Christian, Sunni, and Shiite communities — and give Amal and Hezbollah greater veto power.

At this critical juncture, the Ministry of Finance is poised to play an even larger role in Lebanese affairs. The country remains one of the most indebted in the world and its long-time currency peg to the American dollar — which offered a pillar of stability — has come undone, causing the Lebanese lira to lose 90% of its value. Furthermore, even before the August 2020 port explosion, Lebanon’s public infrastructure was among the worst in the world, providing just a few hours of electricity per day and abysmal internet connectivity.

Now the Lebanese government is asking for a recovery program from the International Monetary Fund (IMF) and another $11 billion from donor countries in hopes of saving its finances. It is also soliciting offers for the reconstruction of the port of Beirut. The IMF, France, and the U.S. have made it known that no aid will flow until Lebanon makes necessary reforms to areas including taxation and the public sector. And as the Greek sovereign debt crisis demonstrated, meaningful reforms can be painful and require strong political will to enact. But in Lebanon, such reforms strike at the core of the confessional patronage system, threatening sectarian leaders’ ability to placate voters with financial support, jobs in the public sector, and favors in the education system. Any drastic cuts or reforms will upend such systems of dependency and fundamentally threaten their hold on political power.

Control of the Ministry of Finance might also help to cover up past crimes and financial misconduct by pro-Axis of Resistance parties and their allies, making sure they cannot be traced back to them. A key demand of the IMF is a forensic audit of the central bank. Last year, financial firm Alvarez & Marsal attempted to carry out an audit, only to terminate it a few months later after they were not given sufficient information to complete it. Although Khalil has signed off on a new forensic audit to proceed with the same firm, as noted in an AP report, his oversight involves a clear conflict of interest. How can someone who was an architect of the central bank’s dubious financial engineering now oversee its forensic audit?

Taking control of the Ministry of Public Works

While having an ally atop the Ministry of Finance is the greatest prize, Hezbollah itself also gained the Ministry of Public Works in the cabinet. The new minister, Ali Hamieh, will oversee land use, air traffic, and the country’s ports. It comes as no surprise that Hezbollah had demanded this key ministry. The previous minister of public works, Youssef Fenianos, an ally of Hezbollah, was sanctioned by the U.S. Treasury for collaborating with the party. Fenianos ensured that Hezbollah-linked companies were awarded millions of dollars in public works contracts, enabling them to circumvent sanctions and gain access to fresh funds. With Beirut in tatters after last year’s port explosion, the ministry is bound to gain a significant share of any new financial aid, and with an ally in the Ministry of Finance, these funds will be more easily accessible. Control of the ministry could also give the party a say on how the port is reconstructed and who will carry out the work. Furthermore, as the Ministry of Public Works also oversees Beirut’s port, control could give Hezbollah the chance to cover up some of its more illicit activities. In addition, it would allow Hezbollah to maintain its smuggling routes as monitoring and implementation of all policies pertaining to the country’s road networks and land transportation falls under its authority. The party has been implicated in smuggling fuel, wheat, and contraband goods into Syria before selling them at higher prices on the other side of the border to help fund its operations, generating an estimated $300 million a month.

Hezbollah and its allies will now have a major say in negotiating and carrying out any structural reforms, something the party has voiced apprehension toward. As Lebanon restarts its negotiations with the IMF and seeks money from donor countries, the international community should make it known that it will not allow its money to be siphoned off by Hezbollah and its allies. Much like the maximum pressure campaign on Iran, pressure must be maintained on the Lebanese government to continue with real, tangible reforms. As the EU and the U.S. have sanctioned a number of Lebanese officials seen as dealing with Hezbollah, they both should make it known that if these new ministers try to obstruct critical reforms or needs such as the forensic audit, they too should be threatened with sanctions. If nothing is done to push back against Hezbollah’s slow takeover of the Lebanese state, it is doubtful the country will ever climb out of the current crisis.

Paul Gadalla is an independent analyst and researcher, writing on a wide range of socioeconomic and security issues. He was previously a Beirut-based journalist. Follow him on Twitter: @BoulosinDC. The views expressed in this piece are his own.