Why King Salman Went to Asia 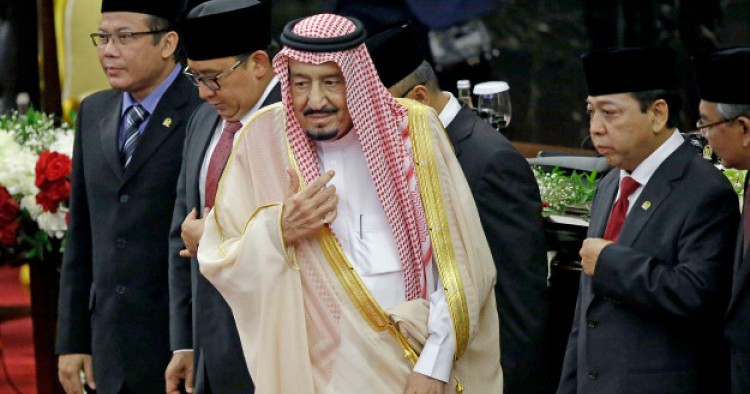 There are many reasons for Saudi Arabia’s King Salman, a reluctant traveler abroad at the best of times, to be undertaking his ambitious month-long journey to the Asia-Pacific region. China and Japan are critical economic partners that Saudi Arabia needs to fulfill its ambitious Vision 2030 program of economic and social reform. Brunei, Indonesia, Malaysia, and the Maldives are all majority-Sunni states and members of the Organization of the Islamic Conference, which is headquartered in Jeddah and led by Saudi Arabia. As such, they are vital to Saudi efforts to construct a united Sunni front to challenge Iran’s ambitions to amass power in the Islamic world.

But there can also be no doubt that the not-too-subtle subtext of the king’s tour is a signal that Saudi Arabia will preserve its flexibility when it comes to its dealings with the United States. Riyadh’s reaction to Donald Trump’s election as U.S. president has been positive. Salman was among the first leaders to congratulate the president-elect last November. His foreign minister, Adel al-Jubeir, has worked aggressively to establish ties to the new administration and has praised it in comments to the press and in public fora.

And for its part, the Trump administration shows every sign that it reciprocates the Saudi desire to rebuild a relationship that had withered during the unhappy years of the Barack Obama presidency. As part of its efforts to bolster its Iran containment strategy, the Trump administration is increasing its support for the Saudi-led coalition now entering the third year of its military engagement in Yemen. The Trump administration has announced plans to lift some of the restrictions on arms sales to Saudi Arabia imposed by Obama, particularly on precision-guided munitions (but not, apparently, on cluster munitions). Defense Secretary James Mattis reportedly has toyed with undertaking more aggressive efforts to interdict at sea Iranian weapons supplies to the rebel Houthis in Yemen. Meanwhile, Saudi Arabia is conspicuously absent from the list of “dangerous” Muslim-majority nations to be subject to new restrictions on U.S. visas, despite the fact that 15 of the 19 September 11 hijackers were Saudi.