Why many Tunisians are celebrating President Saied’s decision 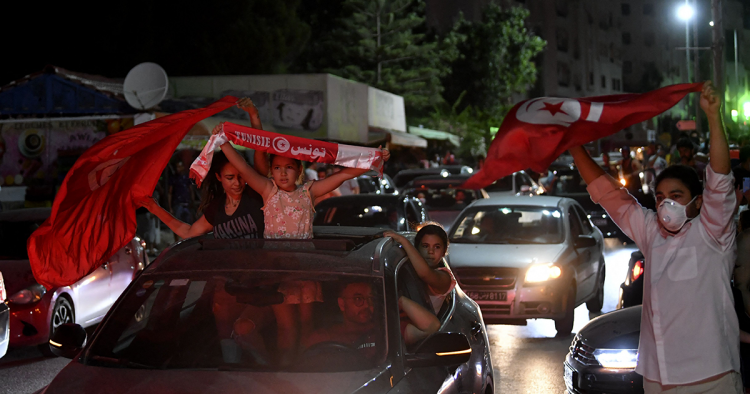 Tunisian President Kais Saied’s opponents and international commentators more familiar with Egypt have been quick to condemn what they are calling a “coup.” In addition to the need to assess the Tunisian situation on its own unique terms, it may be useful to set aside legalistic and political science taxonomy for the moment and consider instead why many in Tunisia have celebrated the president’s recent decisions.

Demonstrators in Tunisia did not quite get their wish of a dissolved parliament and a new revolution when thousands took to the streets in a dozen cities on Sunday, July 25. But the president freezing the work of parliament, lifting parliamentary immunity for its members, and dismissing Prime Minister Hichem Mechichi satisfied the many who subsequently poured into the streets at night in celebration. That so many earlier in the day braved the sweltering heat (over 40 degrees Celsius or 104 Fahrenheit), faced off against violent (and sometimes deadly) police forces, and defied government restrictions on transportation and travel were all signs of a people who have long since run out of patience with those governing them.

In early July, a Facebook event that had been set up in May became active and called for a new revolution on July 25, 2021 — coincidentally a national holiday marking republic day, when the monarchy was abolished in 1957. The fixed date helped disparate dissidents to consolidate their efforts and channel long-held grievances into public protest. While opponents of President Saied may be concerned that his new concentration of powers looks monarchical, those celebrating in the streets are less worried about a concentration of power than they are about a government that has seemingly abandoned its people. This is evident in the current health crisis, the continuing economic crisis, and the long-festering crises in areas that shape the quality of life like the deterioration of education and transportation, as well as water injustice and environmental destruction.

The immediate trigger and context for the recent unrest is a failed response to COVID-19, with none of the key governing figures seeming to treat the catastrophic situation with the urgency it requires. Tunisia has had the tragic distinction in recent weeks of suffering extremely high COVID-linked death rates relative to its population size: 205 people died from COVID on July 15, the highest per capita rate in the world that day. And yet Prime Minister Mechichi on July 17 and 18 spent his weekend with some ministers by a luxury hotel pool in the seaside city of Hammamet; his ministers reportedly cancelled other work meetings on the COVID-19 response to go on the trip, using the excuse that health protocols prevented them from meeting. Corruption watchdog group and Transparency International’s Tunisia chapter iWatch blew the whistle on the getaway, and iWatch President Achref Aouadi temporarily had his Facebook account restricted — seemingly for doing so. The watchdog group later called on Prime Minister Mechichi to resign, and corruption has been a key complaint in street protests for months.

But it wasn’t just that images of the prime minister lounging by the pool or playing tennis were juxtaposed against those of hospitals: overcrowded, running out of oxygen, corpses left in hallways. The hotel getaway also contrasted with how many Tunisians were forced to spend their own weekends: stuck at home due to strict restrictions on transportation. While most economic and work activity is allowed to continue during the day on weekdays, people in Tunis were stripped of their weekends starting from July 10. Instead of being able to use their time off to visit family and friends, find green space, or head to the beach to cool off, many have been confined and stewing in their own neighborhoods. The initial two-weekend lockdown stretched into three this July 24-25 weekend, threatening to become a permanent feature of life in Tunis, similar to the nightly curfews that have stretched on for months with little to show for it in terms of fighting COVID.

At the same time, the current government has recently raised the prices of key consumer goods, significantly reducing the subsidies on sugar while declining to control prices on other goods. These price increases may be linked to the government’s current discussions with the IMF for a new loan program to pay off old loans. The effect, however, has been to further decrease the purchasing power of Tunisians, who have seen a sharp decline in the value of the dinar in recent years, in line with the conditions of the previous loan program. It may be that Prime Minister Mechichi’s ability to last as long as he did, despite having no identifiable popular constituency behind him, had been to allow him to conclude an unpopular loan agreement with the IMF in the early fall.

Some have tried to direct antigovernment protests and sentiment solely toward Ennahdha, perhaps saving the rest of the state system or other parts of the regime from blame. This has likely helped fuel the vandalism of the party’s offices in different cities, and perhaps lent some legitimacy in the eyes of some to the authorities’ decision to shut down a broadcast from Al-Jazeera Arabic’s Tunis office. This is likely fueling fears among Ennahdha that they will face a forced exit from the political scene or worse — repression like they experienced for decades under the pre-2011 regimes. However, there are reports that security forces stepped in to disperse anti-Ennahdha crowds that were approaching its headquarters in the early morning hours of Monday, suggesting that — for the moment — the state apparatus is not ready to entirely scapegoat and sacrifice Ennahdha.