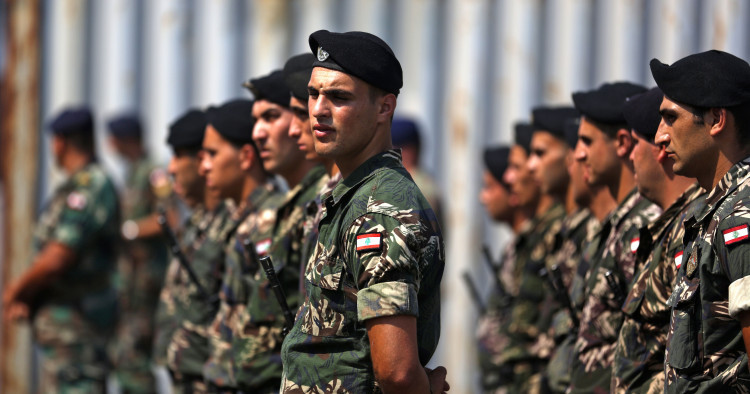 For an organization that disintegrated twice over the past four-and-a-half decades — once in 1976 and again in 1984 — the Lebanese army is no stranger to crisis. But with Lebanon’s economy in free fall, the predicament in which the Lebanese Armed Forces (LAF) now finds itself is unprecedented. The LAF’s considerable financial shortfall over the past couple of years has measurably affected its morale, readiness, and operational capacity.

In June 2021, LAF Commander Gen. Joseph Aoun held a press conference at army headquarters warning of the danger of continued paralysis and pleading with the country’s rulers to support the LAF. “If unmitigated, the economic and financial crisis will inevitably lead to the collapse of all state institutions, including the LAF — the backbone of the country,” he said.

The LAF used to pay the equivalent of $1,000 per month to enlisted Lebanese soldiers. Since late 2019, however, this already modest sum has plummeted to $30, according to LAF leadership, due to the Lebanese pound losing more than 90% of its value against the U.S. dollar. Things have gotten so bad that around the time Gen. Aoun was making his June speech, the LAF was offering tourists helicopter rides to try to earn extra revenue. It has been very hard for Lebanese soldiers to maintain their focus, show steadfastness, and perform their duties at a high level. Many have had to take on multiple jobs merely to feed their families. The LAF has even forced its personnel to adopt a vegetarian diet because it cannot afford to buy meat.

There couldn’t be a worse time for the LAF to potentially fall apart. A series of monumental challenges await Lebanon now that the parliamentary elections are over, all of which demand a modicum of stability that only the LAF can provide.

For the United States, the potential fall of the LAF would significantly reduce its access and influence in Lebanon. The LAF is the only trustworthy and effective partner with which Washington has worked over the past decade. Moreover, no partner military in the Arab world has reformed and even transformed in recent years more credibly than the LAF, thanks to U.S. support. Losing America’s foothold in Lebanon essentially means handing the country over to Iran and Hezbollah, which Israel won’t tolerate and could lead to another large-scale war with the Shi’ite group that will likely upend regional stability.

The Biden administration appreciates the strategic value of partnering with the LAF. In March 2021, Secretary of State Antony Blinken said that the United States will maintain its support for the army, and later in September President Joe Biden signed a memorandum pledging $47 million in immediate aid. However, that additional U.S. assistance was primarily for defense articles rather than direct support to Lebanese soldiers.

Aware of the great human challenge of the LAF, in January 2022, the State Department announced it was planning to reroute $67 million of military assistance to provide “livelihood support” for members of the Lebanese military. Yet, several Republican members of Congress have raised concerns about this initiative — which is why the funds have yet to be disbursed to the LAF — saying that the United States shouldn’t set a precedent by giving direct cash payments to the militaries of partner nations, and shouldn’t give money to the LAF that might benefit Hezbollah. These arguments are entirely unconvincing.

Second, if the LAF can be trusted to protect the sophisticated weapons it receives from the United States (indeed, it has had an impeccable record on End-Use Monitoring according to the State Department), surely it can be trusted to effectively use and manage financial resources. The use of biometrics, which could be provided by international organizations, also could be considered to ensure the best accounting practices.

Strategic considerations regarding why the United States supports the LAF should trump secondary, process-related concerns raised by some U.S. lawmakers. There’s no point in continuing to give dozens of millions of dollars’ worth of U.S. equipment to the LAF every year if the Lebanese soldier — the backbone of the army — is barely able to survive and make ends meet. That would be illogical and a clear waste of U.S. taxpayer money. U.S. interests in Lebanon are best served if Washington adopts a more holistic and strategic view of its assistance to the LAF.

Bilal Y. Saab is a senior fellow and the director of the Defense and Security Program at the Middle East Institute. He is the author of the recently published book Rebuilding Arab Defense: US Security Cooperation in the Middle East. The views expressed in this piece are his own.