Will protests in Iran lead to negotiations with the US? 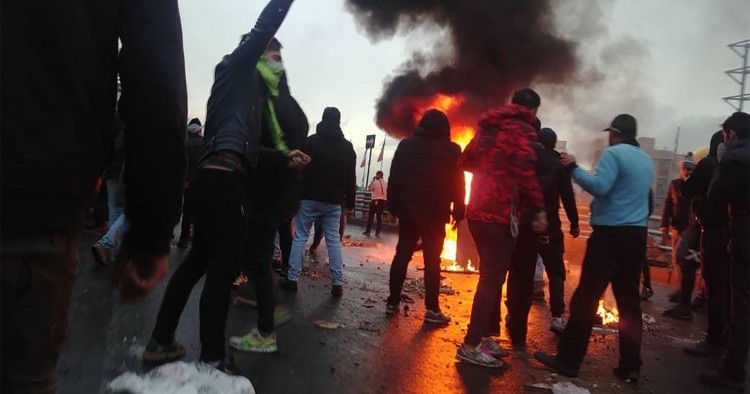 The protests that began in Iran in mid-November may well have a direct impact on Tehran’s relations with Washington. Initially sparked by the Iranian government’s sudden decision to raise fuel prices, the demonstrations have made clear the country’s fragile socio-economic and political situation. This may further motivate the Iranian leadership to use every available means at its disposal to ease U.S. sanctions. However, instead of attempting to launch negotiations with the U.S. immediately, Iran may first try to ramp up pressure on America and its allies in the Gulf to improve its bargaining position and compel the U.S. to be, at least formally, the first to suggest direct talks without preconditions.

The events of November 2019 have left little doubt as to the impact of American sanctions. Since U.S. President Donald Trump’s decision to reimpose sanctions on Iran and deprive it of access to the international banking system and financial and oil markets, the country’s economic situation has steadily deteriorated. By the end of 2019, economic growth fell below negative 9 percent, as sanctions and internal structural problems took a toll. Meanwhile, high unemployment rates, 35 percent inflation, and a 63 percent increase in annual food prices created an environment ripe for unrest. It was only a matter of time before people took to the streets.

Consequently, when they decided to raise fuel prices, the Iranian authorities were well aware that protests were likely. The Center for Strategic and International Studies noted that since late 2017, there have been a number of protests each month “about such issues as deteriorating economic conditions, environmental degradation, and political grievances.” And the large protest movements in Iraq and Lebanon against austerity measures should have left no doubts among Iran’s leaders that its population would not take well to a fuel price hike.

Being deprived of access to the global oil market, Iran has had to cut its huge social programs, which were ensuring the loyalty of the lower-income strata of society and, consequently, the very survival of the regime. Such programs are costly, with fuel subsidies alone totaling 1.6 percent of GDP in fiscal year 2017-18, according to the IMF. On Nov. 17, during a cabinet meeting, President Hassan Rouhani acknowledged that the only way Iran could continue to provide adequate support to the poor would be to restructure and reduce subsidies.

It seems that the country’s leadership was hoping that austerity measures and economic reforms, along with managing domestic turmoil, would allow it to hold out at least until after the U.S. presidential elections in November 2020, when Tehran expects to enter into comprehensive negotiations with the West to lift sanctions. The key question, however, is whether Iran will be able to make it until then. Iran’s leaders have implicitly acknowledged that the economic situation is not sustainable. During a Nov. 27 speech, Supreme Leader Ayatollah Ali Khamenei said that the unrest (or, as he called it, “the plot”) was “broad and very dangerous.” Indeed, the government undertook a series of unprecedented measures to suppress the protests, including cutting off the country from international internet traffic.

For now, it is unlikely that the current demonstrations will seriously threaten the regime’s survival. However, the widespread sense of economic anxiety among the population may lead to more protests, ratcheting up the pressure. Under these circumstances, the turmoil could prompt a change in Iranian strategic thinking. In 2012, unrest sparked by the rise in poultry prices and the subsequent decline in the value of the rial forced Iran to return to negotiations with the U.S. and the international community.

Nevertheless, this does not mean that what happened in 2012 will be repeated in full. It is entirely possible that before it returns to the negotiating table Iran will try to use all available means to raise the stakes and increase its bargaining power with the U.S. For the Iranian leadership, there are two main lessons from the November protests. While the unrest made clear the fragility of the socio-political situation, it also demonstrated to the leadership that, at least so far, it can handle the crisis. The Iranian authorities have developed tools to manage unrest, using a combination of repression by security forces and information control. This makes it difficult for protests to ever evolve into a full-scale revolt.

In addition to coercion, Iran has also applied targeted populist measures to dampen unrest. On Nov. 17, Rouhani signed a decree to pay compensation to citizens who have suffered as a result of the increase in fuel prices. After initially taking a harsh approach toward protestors (especially in regions populated by ethnic minorities), the authorities later switched tactics and tried to allay the population’s concerns, promising to reconsider aspects of the fuel price hike (for instance, by providing cheap gasoline to drivers delivering consumer goods).

Moreover, the very nature of the current protests has prevented them from evolving into something bigger. Though large in terms of geographical scale — protests have been held in up to 100 cities, towns, and villages — they have still been limited in terms of the numbers of participants and have lacked united leadership and coordination. Most of the protestors were driven by economic considerations, while demands for regime change were voiced only by a very limited few.

Finally, the Iranian political elite is largely united in its decision to support the fuel price increase and counter the protests, as opposed to the 2017-18 protests, when the initial unrest was caused by a confrontation between Rouhani and his opponents from the conservative camp. This time, the president has Khamenei’s full backing. The supreme leader spoke in support of the current austerity measures, which were eventually approved by the Supreme Council of Economic Coordination, a group he created in June 2018 to make emergency decisions to deal with the negative impact of U.S. sanctions on the economy. Of course, Rouhani and his “reformist” allies will bear the brunt of the political backlash. With parliamentary elections approaching in February 2020, the government will likely try to provide a chance for Iran's hardline conservatives to regain the seats they lost in 2016. Such a scenario also satisfies Khamenei, who is politically closer to conservative circles.

Under these circumstances, the outcome of the protests could be twofold: on the one hand, Tehran will definitely be concerned about an escalation in the uprising and try to speed up the launch of negotiations with the U.S. to ease the economic pressure. On the other hand, however, the Iranian leadership likely still believes it has time to prepare by raising the stakes to secure a stronger starting position in the talks and enable it to demand an immediate lifting of secondary sanctions.

To achieve these twin goals, Iran can intensify the tactics it has used for the past 10 months, alternately destabilizing regional security and using the gradual buildup of its nuclear program to raise the value of a possible deal and also warn the Americans about the potential consequences of further increasing economic pressure. In between of the use of these levers, the international community has usually been given time to reconsider its support for U.S. sanctions before Iran repeats the actions.

The absence of a decisive U.S. response to the capture of oil tankers in the Gulf over the summer and the reluctance of the international community to find out who was behind the September attacks on Saudi oil infrastructure led Iranian decisionmakers to believe their bullying strategy was working. The EU is now considering how to revive Iran-U.S. dialogue to avoid a regional conflict. At the same time, the GCC countries (including Saudi Arabia) are looking for ways to defuse tensions with Tehran on their own, given their growing doubts about the ability — and inclination — of the U.S. to protect them.

In early November, Iran took another step away from its obligations under the 2015 nuclear deal by resuming uranium enrichment at the Fordo facility and increasing its level above the allowed 3.67 percent. Tehran gave the West two months to reconsider the use of sanctions before it makes another decision to further violate the nuclear agreement or leave it altogether. However, the November protests could convince Tehran to revise the deadline for its next move to motivate the U.S. to start negotiations. What comes next may not necessarily be on the nuclear track either. Confident in its abilities to destabilize the Gulf, Iran could use its proxies to ratchet up pressure on the U.S. to begin talks and ease up on Tehran.

Nikolay Kozhanov is a Research Associate Professor at the Gulf Studies Center of Qatar University and a Senior Research Fellow at the Institute of World Economy and International Relations (IMEMO) under the Russian Academy of Science (Moscow), where he leads research projects on Iran’s political economy and foreign policy. The views expressed in this article are his own.