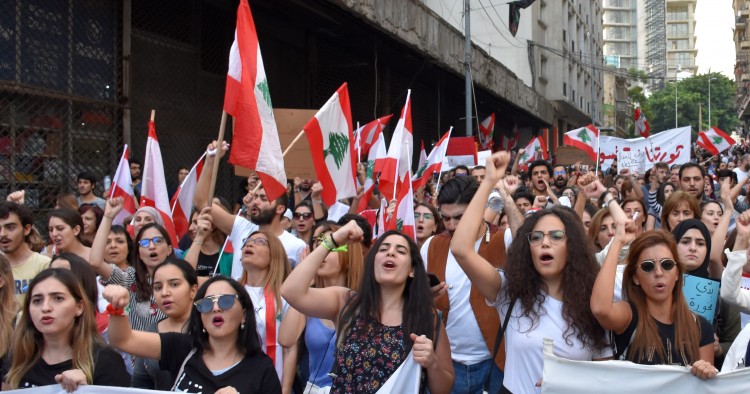 On Oct. 29, Prime Minister Saad Hariri submitted his resignation and that of the government, a move that has been hailed as an important victory for the protestors who have taken to the streets across the country for nearly three weeks now. Heralded as al-thawra, or revolution in Arabic, Lebanon is witnessing the rise of an inclusive, decentralized, and grassroots movement that transcends geography, sect, and traditional loyalties to political dynasties and parties. From the onset, women have been an integral part of Lebanon’s revolution, and its growing strength would not be possible without their participation, leadership, and courage. As protesters wait for more detailed plans concerning broader structural reforms, there is a need to draw special attention to the systemic struggles women face in the country, and to emphasize the agency and leadership they have shown in shaping this revolutionary movement.

Lebanese women on the frontlines

Since the very beginning of the protests, women have been on the frontlines. One of the first viral moments that galvanized the movement was footage of a woman kicking an armed security guard who threatened to open fire on protesters. As the protests grew in size and momentum, photographs spread on social media of young women and girls forming barriers between the army and demonstrators. The underlying reasons for doing so were to protect their male counterparts from violence by the army, defuse tensions, and maintain the non-violent nature of the protests. These are not isolated incidents — photographs and videos of women, across generations, participating in the revolution, holding witty and bold protest posters, dancing defiantly, and protecting their fellow demonstrators highlight the very visible engagement of women in the revolution.

Social media has played a significant role in empowering protesters to communicate their grievances and raise their voices. Most notably, clips of protesters condemning the government and the abysmal state of public services have gone viral, simultaneously communicating the depth of the issues and empowering new participants to join the movement. In many ways, these clips, and the ease with which they can be shared, have energized protests and motivated people to rally around shared economic, social, and political struggles. Of these videos, some of the most powerful and widely circulated monologues have been of women speaking their truth, sharing their experiences, and condemning the entire ruling elite. The popularity and influence of such messages speaks to the empowered role women are playing in this movement and debunks both the orientalist depictions of Lebanese women as in need of being spoken for and the patriarchal tropes of women as passive or submissive actors.

Women have inspired the revolution, led the movement, and protected it from the machinations of the sulta (authority). If the spirit of this movement is about righting the wrongs brought on by sectarianism, poor governance, and corruption, we must recognize the specific and disproportionate injustices women experience in the country. The challenges brought on by Lebanon’s poor public services and sinking economy are especially amplified for poor women and women in neglected regions, domestic migrant workers, refugees, and sexual minorities, among other marginalized groups. In no uncertain terms, women are discriminated against in the country’s laws, economic practices, and social and political norms.

One of the most striking examples of legal discrimination, and a rallying point for demonstrators, is that Lebanese women cannot pass on citizenship to their children. Not only does the law deny women nationality rights, it can also leave their children stateless. Speaking to Reuters, Paula Yacoubian, a parliamentarian from the civil society bloc who has been fighting to reverse the biased law, highlighted its broader ramifications: “It is not only about women — it is about suffering families. … They don’t have a piece of paper that says you have a nationality — it is degrading.”

In addition to the rejection of women’s nationality rights, Lebanon maintains that personal status laws fall under the jurisdiction of religious rather than civil courts. In other words, there is no civil code in Lebanon to deal with matters of personal status, such as but not limited to marriage, divorce, custody, alimony, or inheritance. Rather, personal status laws are regulated by sect-specific religious courts, each with their own laws, all of which discriminate against women. In a comprehensive review of more than 400 legal judgements issued by religious courts, a Human Rights Watch report on Lebanon’s personal status laws found: “A clear pattern of women from all sects being treated worse than men when it comes to accessing divorce and primary care for their children (‘custody’).”

Moreover, gender-based violence remains a serious problem for women in Lebanon, and one that is inadequately addressed by its laws. For instance, while the country passed legislation in 2014 to protect women from domestic violence, the law failed to criminalize marital rape. Another key setback of the law is that it does not take precedence over personal status laws. Rather, it takes a backseat, giving religious courts the power over a woman’s right and ability to leave abusive marriages.

Shedding light on the many overlooked consequences of the absence of appropriate legal protections for women in abusive relationships, single mothers, or divorced women seeking alimony and child support, one woman who preferred to speak anonymously emphasized that women’s grievances and appeals are often dismissed by the courts and the Internal Security Forces (ISF). Sharing her own experience, she recalled that “I once got hit badly by my ex-father-in-law and you know what I was told in court? ‘This is a family issue, go fix it on your own!’” She went on to explain that:

“After I struggled with domestic violence and a very long divorce process in the religious court, every time I tried to collect my kids’ alimony from my non-compliant ex-partner, I had to get a prison verdict from the civil court and transfer it to a police station and wait for them to try to capture him and make him pay. When I go down to the station to check if there’s any news, every time I am faced by sentences like ‘give up already,’ ‘go find yourself a nice guy and get married, you are still young and beautiful,’ or ‘you know miss we’ve got more important issues, you have to wait.’”

Gender-based violence takes many forms and exists in both the public and private arenas — in homes and in offices, on the streets and behind closed doors. Outside of domestic relationships, gender-based violence, especially in the forms of sexual harassment and abuse, is a very real threat to women in the workplace. However, no adequate legal protections exist to safeguard women against either. The absence of such necessary protections adds to the challenges confronting female employees, who face multifaceted forms of direct and indirect exploitation. As Lebanese activist Riwa Salameh writes, “57% of female employment is informal, unregulated by the labor law. This sector is mainly characterized by lack of safety, long working hours, arbitrary expulsion, and lack of social security.”

In sharp contrast to the active participation and leadership of women in the revolution, Lebanon has been consistently ranked as one of the lowest in the region in terms of parliamentary representation of women. To remedy this situation, women’s advocacy and civil society groups have lobbied to advance a draft electoral law, known as “the female quota,” that would ensure a 30 percent quota for women. In 2017, in a move widely condemned by activists and civil society groups, the government failed to pass the draft law or work to incorporate the proposal in parliament.

While the above analysis does not capture the full extent of gender discrimination in Lebanon, its purpose is to emphasize its systemic nature. Systemic forms of injustice feed into each other. Corruption, sectarianism, clientelism, racism, and patriarchy all reinforce one another, producing an unbearable environment. Emphasizing the urgency of dismantling these barriers, Zeina Krayem, a nurse who has protested daily, stated, “We demand to be properly represented in the government. We demand a civil law to ensure our rights of custody and proper divorce courts under a unified law for all citizens. We demand a better anti-violence law that would include measures for harassment and marital rape. We demand actual fair court sessions for men who kill their wives and get away with it under the current Lebanese laws. We demand financial support for single mothers similar to all other countries.”

At the heart of Lebanon’s popular uprising is a collective struggle against injustice. Demonstrators have transcended sectarian, regional, generational, and traditional political loyalties to condemn a broken political and economic system — all in the spirit of building a fair, sustainable, and just alternative. From the viral footage of a woman kicking an armed security guard to the powerful images of women forming a buffer between the army and protesters, women have been instrumental to the revolution’s success.

If we are to understand the movement taking shape across the country to be fundamentally about the fight for dignity and against a system that has infringed upon that dignity for decades, we must appreciate the specific and added struggles women face. It is not enough to recognize that the revolution would not be possible without the leadership, courage, or engagement of women. The revolution is incomplete if it doesn’t champion women’s rights and justice. Ultimately, such an inclusive and intersectional platform will likely, as it should, be advanced and led by Lebanese women, who have played a leading role in shaping this historic movement and made clear that the future is theirs.

Fadi Nicholas Nassar holds a PhD from the War Studies Department at King's College in London, and he was previously a visiting fellow at Sciences Po Paris and a doctoral fellow at the Geneva Centre for Security Policy. The views expressed in this article are his own.