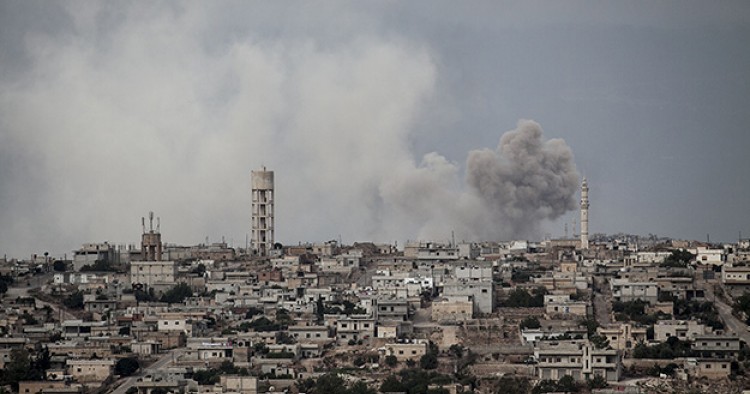 Probably the most important group fighting the Syrian regime now is Ahrar al-Sham (Free Men of the Levant), a Salafi group fighting mainly in the north but also in central and southern Syria. Contrary to Western reports suggesting that the al-Qa‘ida-linked Nusra Front led the battle to capture the northwestern Syrian provincial capital of Idlib last March, Ahrar had more fighters in the battle—a fact demonstrated by its predominance in the subsequent military oversight council established for Idlib. Ahrar is a key force on the battlefield, but Western media allots little space to describe it beyond saying it is “hard-line” or “jihadi.”

The label stems in part from Ahrar openly calling for the establishment of an Islamic state in Syria. In addition, its collaboration with Nusra on the battlefield against the Assad regime, as well as the Islamic State, adds to Western suspicions. Ahrar is not a junior partner of Nusra; there are ideological and political differences between them.

Ahrar, not the Nusra Front, has been the main driver behind coalition building within Syrian Islamist rebel ranks. For example, it shaped the Syrian Islamist Front formed in December 2012 and the Islamic Front formed in November 2013. These coalitions transcend tactical military cooperation and instead involve agreement on a common ideological and political program. Ahrar has not included Nusra in any merger, instead limiting itself to tactical coordination through joint command centers, most recently the Army of Conquest (Jaysh al-Fateh) commands in northern and southern Syria.

Like other Islamist groups that adhere to Salafism, Ahrar al-Sham has stated that it rejects Western-like secular democracy (while acknowledging its merits) and calls for a Sunni theocracy in post-Assad Syria. In an interview with Al Jazeera in April 2015, Ahrar’s leader Hashem al-Sheikh (Abu Jaber) said that after victory there will be a government that emerges from the people, who will choose it based on a constitution that uses Shariah as its source. Previous Ahrar leader Hassan Abboud, killed in 2014, appeared flexible about the structure of an Islamic state, and al-Sheikh did not give details of the shape of this future state. Acknowledging that the people would establish or even choose the government is a significant departure from much hard-line Salafi doctrine, including that of al-Qa‘ida and hence of Nusra. Notably, the current Iraqi constitution that the U.S. government shepherded in 2005 also lists Shariah as a source of its provisions.

Ahrar and Nusra have sometimes disagreed about the governance of areas under their control. In July 2014, Nusra pulled out from a governance structure established by Ahrar and other less radical groups in towns they controlled in Aleppo and Idlib Provinces and established its own network of Islamic courts with extreme legal and social codes. In April 2015, the two groups reportedly disagreed about the role victorious opposition fighting groups should play in the administration of the newly-captured city of Idlib. Nusra wanted its men to have a direct role. By contrast, Ahrar insisted, publicly and privately, that civilians should administer the city and that the role of the rebel groups should be limited to providing security and protection. Ahrar’s behavior in the areas it controls seems to reflect a higher degree of tolerance for people being involved in their own governance as well as a higher degree of cooperation with the local population.

While Nusra rejects non-Muslims having any authority over Muslims, Ahrar takes a more nuanced stance. In the April 2015 Al Jazeera interview, Hashem al-Sheikh stated that the ruler needs to be a Sunni Muslim, but added that “there is nothing that prevents minorities [from holding positions] if they possess the right qualifications.” He also said, “Minorities existed in Syria since early history and they lived under Islamist governments that guaranteed their rights.”

Ahrar’s leadership publicly condemned Nusra fighters after the June 10 attack against Syrian Druse in the town of Qalb Lawzeh in Idlib Province that saw 18 Druse civilians killed. Representatives of Ahrar al-Sham along with Khaled Khoja, head of the externally-based opposition Syrian National Forces Coalition, later met with Druse leaders to reassure them. They agreed to form a joint committee including local council and rebel group representatives to resolve “any disagreement that could arise in the future.” Of course, the real question is how Ahrar fighters behave on the ground toward minority groups. Here Ahrar’s record is problematic. Its fighters appear to have been involved in extrajudicial killing of Alawi civilians during fighting in Latakia in 2013, and there are accusations that it desecrated Christian sites in Kasab in 2014. But the group also issued a video showing its fighters visiting priests in April 2015 to reassure Christians of their safety.

Ahrar al-Sham has also sparred with Jabhat al-Nusra over its affiliation to al-Qa‘ida. In the April 2015 interview, al-Sheikh said, “We disagree with it on matters that relate to politics as well as the issue of its connection with al-Qa‘ida.” This disagreement extends back to May 2013, when Ahrar issued a statement about Nusra’s pledge of allegiance to al-Qa‘ida’s leader, Ayman al-Zawahiri. In the statement Ahrar warned that Nusra’s affiliation with al-Qa‘ida was not in the interest of the Syrian revolution and that it would “regionalize” the conflict by inviting outside intervention. Though some of Ahrar’s founding members had ties to al-Qa‘ida going back to the late 1970s and 1980s, most of these men have died. Ahrar has consistently viewed the war in Syria as a national movement unconnected to any other Islamist military effort. This distinguishes it from the Islamic State (which it actively fights) and from traditional al-Qa‘ida ideology as well.

Ahrar works with secular groups as well as more moderate Islamist groups, such as the Muslim Brotherhood-affiliated Sham Legion. Unlike Ahrar, Nusra would never meet with the Syrian National Forces Coalition, whose public calls for democracy it finds anathema, and it would certainly not meet with the Coalition to discuss Druse rights. Further illustrating Ahrar’s willingness to join other groups, in August 2014 it joined the Western-backed Revolutionary Command Council, which was meant to replace the collapsed institutions of the Free Syrian Army and include a broad spectrum of rebel groups with the exception of Nusra and ISIS. This attempt to unify the broad base of rebel groups in Syria eventually failed after inter-group tensions arose.

Much of Ahrar’s calculus in allying as well as merging with other groups appears aimed at extending its influence while containing the increasingly assertive Nusra in the north. This, however, does not mean that Ahrar will directly confront Nusra any time soon. It focuses on combating the Assad government and the Islamic State, and does not seek to open a third front against Nusra. In the meantime, Ahrar’s military coordination with Nusra is tactical against common enemies, not a seamless alignment of ideology.

A senior administration policymaker recently told a gathering at the Center for New American Security that the administration would not support groups such as Nusra and Ahrar having influence in a future Syrian government. The administration’s current approach to Syria, however, is helping to ensure the fragmentation of the country; the present trajectory will not produce a future government of a unified Syria. Moreover, lumping Ahrar and Nusra together is intellectually sloppy, especially when they exhibit ideological and political differences. This is not to say that the United States has no differences with Ahrar. There are many, with some, such as respect for human rights and respect for Geneva war conventions, quite serious. Ahrar will have plenty of complaints against the United States as well. Nevertheless, the larger question is whether the United States should open channels for dialogue, however difficult the conversation will be. Talking is most certainly not giving military aid or arming. Our refusal even to talk with groups like Ahrar further reduces the little influence Americans still have in Syria. As the Assad regime steadily weakens, the administration keeps trying to lead the opposition from behind, hoping for an opposition white knight to appear. Instead, because Islamist groups like Ahrar strongly influence decisions about the fate of Syria, Washington will be left behind.